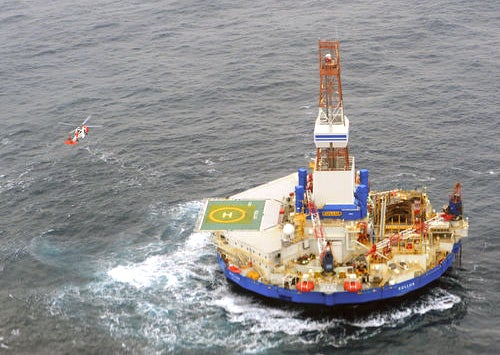 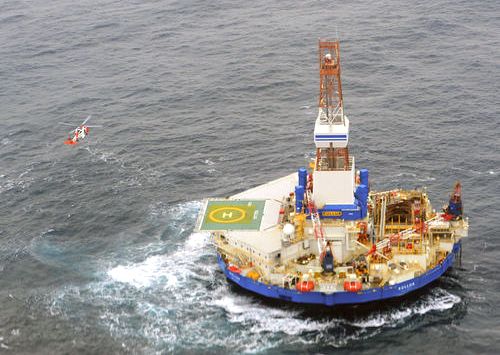 A Coast Guard MH-60 Jayhawk helicopter crew from Air Station Kodiak conducts hoists of the second of 18 crewmen from the mobile drilling unit Kulluk in 15 to 20-foot seas 80 miles southwest of Kodiak City Saturday, Dec. 29. The Coast Guard was prompted to rescue the crew of the Kulluk after there were problems with the tow Thursday and the weather conditions began to deteriorate. U.S. Coast Guard photo by Petty Officer 1st Class Sara Francis.

Despite warnings from wildlife advocates of the risks of allowing offshore oil drilling in the rough seas off Alaska, Shell has begun drilling test wells. This week, the New York Times reports the drilling effort turned life-threatening:

An enormous Shell Oil offshore drilling rig ran aground on an island in the Gulf of Alaska on Monday night after it broke free from tow ships in rough seas, officials said.

The rig, the Kulluk, which was used for test drilling in the Arctic last summer, is carrying about 139,000 gallons of diesel fuel and 12,000 gallons of lubricating oil and hydraulic fluid, the officials said.

Thanks to the heroic efforts of the U.S. Coast Guard, 17 crew members on board the Kulluk rig were rescued and brought to safety. But the fate of the area’s wildlife isn’t so clear. While no oil sheen had been spotted as of New Year’s Day, as the Washington Post reports, any spill wouldn’t have to go far to find a range of species:

The Kodiak archipelago, where the rig ran aground, is home to nearly 250 bird species, including horned puffins, red-faced cormorants and Harlequin ducks. It boasts among the highest winter bird counts in Alaska. It is also home to Kodiak brown bears, who feed on local salmon streams.

Watch the grounded rig being battered by waves in this clip from The UpTake:

The Times adds that the grounding is only the latest problem for Shell’s Arctic drilling effort:

Last summer, the Kulluk drilled a shallow test well in the Beaufort Sea while another rig drilled a similar hole in the Chukchi Sea to the west.

But Shell announced in September that it would be forced to delay further drilling until this year after a specialized piece of equipment designed to contain oil from a spill was damaged in a testing accident.

The episode was one of a number of setbacks for the Arctic drilling program last year. Shell now says it hopes to drill five exploratory wells in the region during the 2013 drilling season, which begins in mid-July.

Last August, the National Wildlife Federation’s Jeremy Symons warned of the dangers of Shell’s Arctic drilling plans, even calling out the Kulluk by name. Today, his warning seems eerily prescient:

This week a Shell Oil Co. drilling rig, the Kulluk, headed towards the Beaufort Sea off Alaska’s northern coast to begin drilling operations.  This flagship effort to open up Arctic waters to drilling has already received the thumbs up from the Obama Administration. I can’t help but recall all those “what if” moments following the BP Deepwater Horizon blowout in the Gulf of Mexico.  What if we hadn’t turned a blind eye to insufficient spill planning?  What if we had proper oversight of oil companies and held them accountable for lying about the risks before approving their permits?  What if we truly weighed the risks and the rewards of moving into new drilling frontiers before disaster strikes?

Shell’s rig is not simply another rig.  It is the pioneer, intended to open a new frontier and convert an unspoiled aquatic wilderness into the next big oil rush. These waters are vital habitat for an abundance of wildlife such as ringed seals, as well as whales that travel the world’s oceans and birds that migrate across North America every year.

Shell’s troubles are far from the only trouble the oil industry has seen in Alaska recently. There was a BP oil spill in July 2011 and a Spanish drilling company’s well blowout in February 2012. As a 2010 National Wildlife Federation report detailed, oil disasters are tragically common.