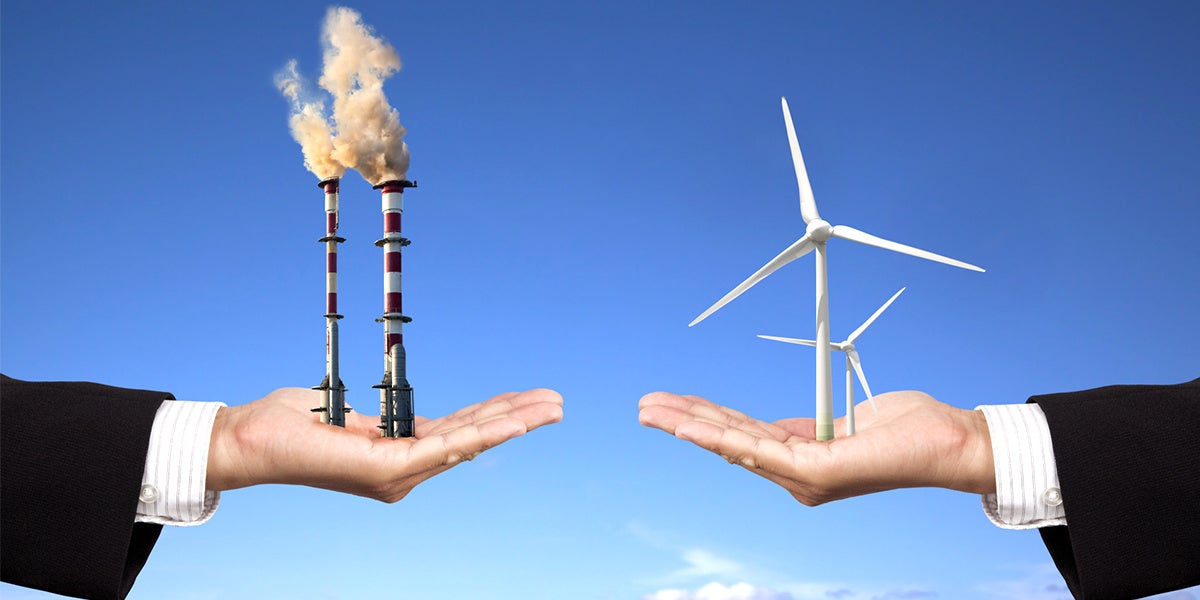 On the surface, the good times are back for Big Oil. Later this week, Shell is expected to unveil its biggest profits in a decade since the oil price crash.

As the oil price recovers to over $65 a barrel last year, so do Shell’s fortunes, with reported earnings of nearly $16 billion.

The days of Shell being on the rocks—pummeled by a low oil price—seem over. So much so that the company even has Big Oil’s number one, Exxon, in its sights. Exxon’s reported earnings are expected to be slightly lower than Shell’s at a still significant $15.7 billion.

As Shell’s CEO Ben van Beurden recently said, “At the moment we are number two and we are closing in on number one. We almost have the tiger by the tail.”

As the two Big Oil companies battle it out for the number one spot, it is worth taking a step back and worth asking who will win the energy war not just in the next year, but in the decades ahead, which will be dominated by the upcoming renewable revolution, stranded assets and climate change. Many would argue that short term profits hide Big Oil’s longer term problems.

In the medium term, Shell is betting big on gas, despite the fact that environmentalists argue is it no solution to climate change. For example, you can read OCI’s report on gas here.

There are signs that the company is also taking some small steps into carbon disinvestment: As Reuters reported this week, “Royal Dutch Shell has spent over $400 million on a range of acquisitions in recent weeks, from solar power to electric car charging points, cranking up its drive to expand beyond its oil and gas business and reduce its carbon footprint.”

Before we all get too excited by this, there are two fundamental problems. One is that the investments are small change, as Reuters pointed out: “The scale of the buying spree pales in comparison to the Anglo-Dutch company’s $25 billion annual spending budget. But its first forays into the solar and retail power sectors for many years shows a growing urgency to develop cleaner energy businesses.”

In total, according to analysts, Big Oil has invested just over $3 billion on renewables acquisitions over the past five years, predominantly on solar. Again it is peanuts compared to the tens of billions the companies spend looking for oil.

And the other problem is the one we have just mentioned, gas. As Reuters noted, “The investments are not limited to renewables such as biofuels, solar and wind. Shell, as well as rivals such as BP, Exxon Mobil and Chevron, are betting on rising demand for gas, the least polluting fossil fuel, to power the expected surge in electric vehicles in the coming decades.”

Indeed, Shell may be betting on gas just at a time when the future of gas is in trouble. “The end of natural gas is near” is the title of an article this month on GreenBiz by Danny Kennedy from the California Clean Energy Fund. It states:

“Natural gas is no longer a contender or pretender, just a relic of the past, likely to fall as far and as fast as Old King Coal, and maybe faster … But I think it’s important to reflect that in 2017, for all its other problems in the clean-energy industry and our nation more broadly, the gas industry became, if not dead, at least a dead man walking.”

It is questions like these—is the market for gas in trouble?—that are supposed to be predicted by Shell’s long term planning unit. A really interesting article by Fortune looks at how this Big Oil dinosaur is desperate not to die out in the coming decades.

All the oil majors have scenario planning and Shell has been doing some serious head scratching. As Jeremy Bentham, Shell’s scenarios leader, said, “I am tasked with making sure that Shell isn’t a dodo.” So will Shell become extinct in the upcoming energy transition or dominate the new energy landscape?

The article argues that when Shell disinvested from most of its stakes in the tar sands last year, it was over long term fears over the oil price, rather than climate, that was the real concern.

The Shell scenarios team, Fortune noted, concluded that “global demand for oil might peak in as little as a decade—essentially tomorrow in an industry that plans in quarter-century increments.”

Hastened by the quickening uptake of renewables, Shell executives were alarmed by the dropping oil price:

“When the oil-demand peak came, Shell believed, petroleum prices might begin a slow slide, dipping too low to cover the costs of oil-sands production. This wouldn’t be just another oil-price cycle, a familiar roller coaster in which every down is followed by an up. It would be the start of a decades-long decline of the Oil Age itself—an uncharted world in which, in a phrase gaining currency at Shell, oil prices might be ‘lower forever.'”

As Fortune noted, “If Shell failed to prepare for this new energy landscape, it could wind up saddled with massive stranded assets: buried oil and gas that its shareholders paid billions to find, but that, because of softening demand, the company found itself unable to profitably drill and sell.”

But adapt to what? “What is a challenge at the moment,” Beurden said, “is that we don’t know anymore where the future will go.” Beurden, Fortune said, is making strategic bets to transform “Big Oil into Big Energy.”

Finally it seems Big Oil has got the message. In response, many will argue it it too little, too late. Environmental groups have been telling the oil companies for decades of the need to disinvest from fossil fuels due to climate change, not just deny the problem of climate change.

But only now, when their very own corporate future is threatened by companies such as Tesla, have the oil companies finally decided to act. Will it be too late for them and us? Will Shell become a Dodo? Only time will tell.