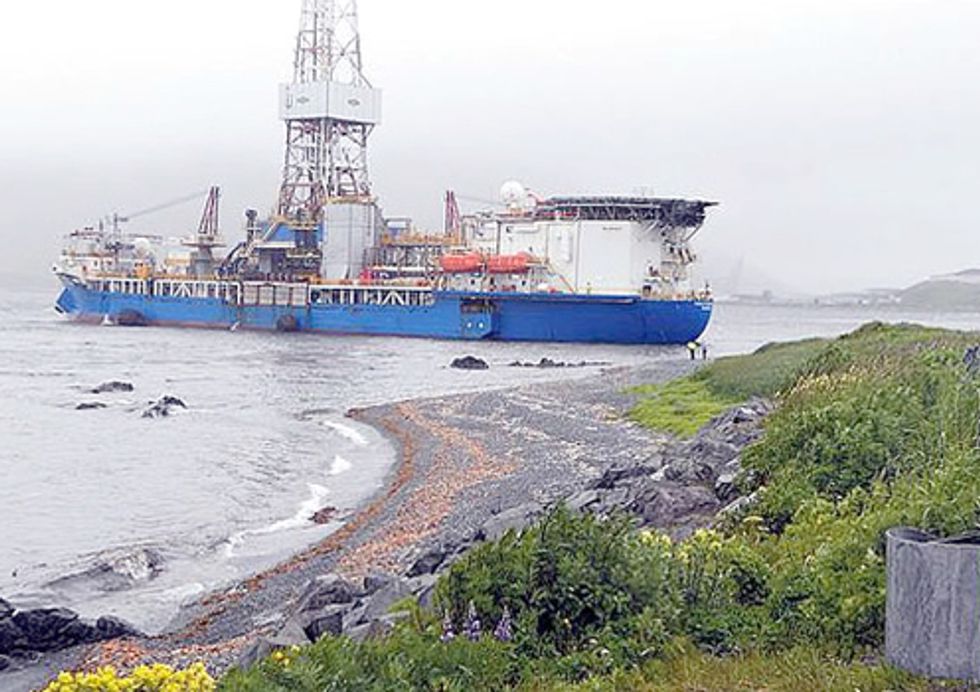 The Noble Discoverer, a 571-foot drill ship, was towed away from land after drifting Saturday, July 14, 2012, near Dutch Harbor. Photo by Kristjan Laxfoss.

On July 14 Shell Oil lost control of its 571-foot drill rig while at anchor in Dutch Harbor, Alaska.

I know. I couldn’t believe it either. Shell’s “Noble Discoverer” is still hundreds of miles away from the Arctic—where conditions are often described as the most extreme in the world—and the oil giant is already having problems.

It turns out that this isn’t the first time this has happened with the Discoverer, one of the oldest drill rigs in the world. Just last year, in New Zealand, several of the ship’s anchor lines snapped in a storm. It was months before the ship was deemed seaworthy again.

But that’s not all.

The Obama administration has called Shell’s plans top-notch. Yet Shell has already broken one promise after another and the drilling hasn’t even begun. There is still time for government experts, like those at the U.S. Environmental Protection Agency (EPA), to stop the disaster that Shell’s Arctic drilling is shaping up to be.

Broken promise #1: Late last month, Shell revealed that its Arctic drilling fleet can’t meet the pollution limits it already agreed to when EPA granted its necessary permits. Amazingly, Shell has known since 2010 that there were problems, but it chose to wait until just days before planned drilling was supposed to commence to let the EPA know. And, instead of agreeing to fix the issues, Shell is asking the EPA to rewrite the rules and let them move forward with drilling this summer.

Broken Promise #2: Shell promised that it’s oil spill recovery barge, the “Arctic Challenger,” would be able to withstand a 100-year storm, and the Coast Guard is trying to hold the company to that promise. But Shell recently disclosed that the 37-year old barge can only withstand a 10-year storm, a standard it believes to be sufficient.

Broken Promise #3: Shell’s oil spill response plans include an “assumption” that it can recover 95 percent of any oil spilled in the ocean. This recovery rate has never come close to being achieved in any spill—the total cleanup rate for Deepwater Horizon was approximately 25 percent. Recently, when it was called on this outrageous “assumption,” Shell started backtracking, suggesting that what it actually meant is that it will be able to “encounter” 95 percent of any oil spilled. One Shell spokesman went so far as to say that when it comes to potential Arctic oil spill cleanup, “it would be rather ridiculous of us to make any kind of performance guarantee.”

Shell’s drilling fleet hasn’t reached the Arctic. There is still time for the Obama administration to stand up for America’s Arctic Ocean and the Inupiat people as well as the polar bears, walrus, ice seals, beluga and bowhead whales and other beloved species of wildlife that depend on it.

Before we hear one more of Shell’s broken promises, we must demand that Obama’s EPA stand up to Shell and say: If you can’t follow the rules, you shouldn’t be allowed to drill in our Arctic Ocean.