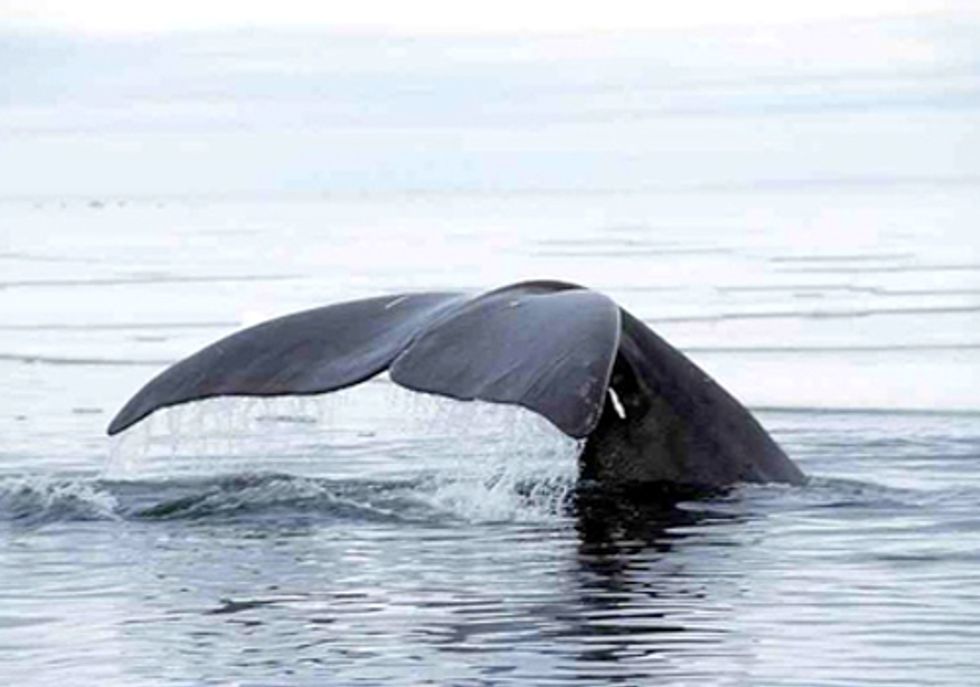 Bowhead whales would be affected by Shell's drilling. Image courtesy of Wikimedia Commons.

Shell has been given the green light from the National Oceanic and Atmospheric Administration's (NOAA) Fisheries Service to "harass" Arctic marine mammals and put them at risk of a major oil spill "during a limited period this summer."

The Arctic Ocean is home to an abundance of wildlife. In the spring, consistent and extensive polynyas—stretches of open water surrounded by sea ice—create pathways into the Arctic for bowhead whales, seals and birds seeking to take advantage of the explosion of productivity created by summer’s constant daylight.

For millennia, this great migration of marine mammals and seabirds has been a part of the Inupiat subsistence culture. Now, however, these animals and ecosystems are at risk. Despite the lack of basic scientific information and demonstrated ability to clean up spilled oil in Arctic conditions, our government is poised to allow companies to move forward with offshore oil drilling in the Arctic Ocean.

Whales, walrus and other species are protected by laws like the Marine Mammal Protection Act, but the NOAA Fisheries Service and U.S. Fish and Wildlife Service are permitting small numbers of marine mammals to be “harassed” by industrial activities by issuing the company an “incidental harassment authorization” or “letter of authorization.”

So what, exactly, is allowed? According to the government, Shell’s plans will result in “Level B” harassment,” which means the activities have:

According to the government documents, Shell’s drilling activities would result in harassment of thousands of marine mammals such as whales and seals.

Of course, it is difficult to evaluate these numbers, or what they might mean for these populations because we are missing basic information, such as good estimates of the numbers of seals and walrus. A fuller understanding of the food web, ocean conditions and changes due to warming would allow us to better understand the impacts of this harassment and Shell’s proposals more broadly.

A humorous website is drawing attention to the impact that Shell’s proposed Arctic drilling program will have on marine mammals, but this is no joke. For its part, Shell continues to push aggressively to drill this summer even as it backtracks on commitments to protect clean air, argues with the Coast Guard about how strong its response barge must be and loses control of its drill ship.

Obviously, a catastrophic oil spill would have a horrible impact on Arctic ecosystems. In addition to that risk, Shell’s proposed drilling would cause air, water and noise pollution from vessel traffic and drilling operations.

Wastewater, particulate matter, nitrogen oxides and other pollutants will be released directly into the air and water on which marine mammals depend. In addition, ice-breaking and drilling will generate a substantial amount of noise that has the potential to disrupt whales and other animals as they feed, nurse and migrate.

Instead of allowing Shell to harass and potentially harm wildlife, our government should focus its attention on developing a vision for the Arctic that is based on science, preparedness and protecting the health of Arctic ecosystems.

The American people deserve healthy ocean ecosystems and affordable energy. Both are possible, but not without planning and science. If we don’t have the basic knowledge of animals’ populations, how can we know the true effects of drilling in the Arctic?

The vibrancy and biodiversity of the Arctic ecosystem depend on these choices, and we cannot allow the future of the Arctic Ocean to be dictated by an oil company.

Visit EcoWatch's BIODIVERSITY and ENERGY pages for more related news on this topic.