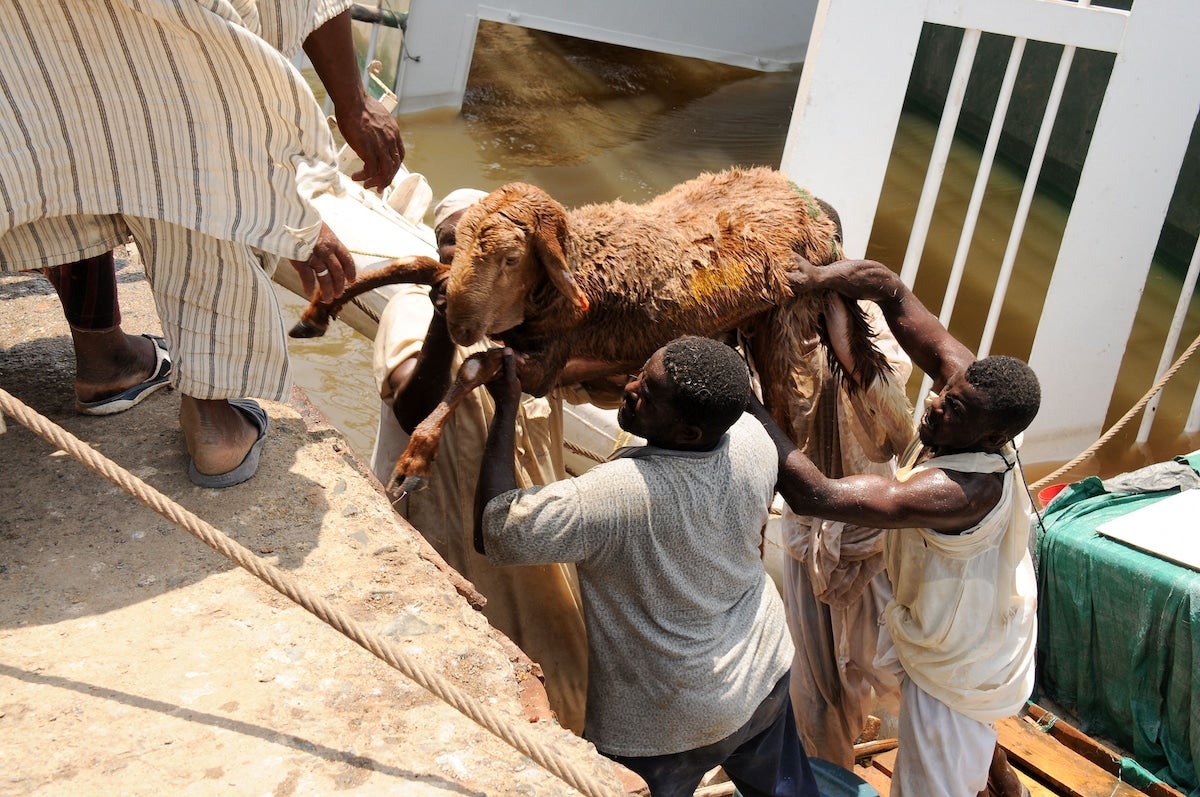 A sheep is rescued after the ship Badr 1 sank in Sudan's Red Sea port of Suakin, drowning most animals on board, on June 12, 2022. AFP via Getty Images

A livestock vessel containing 15,800 sheep sank in the Red Sea on Sunday, June 12 off the port of Suakin, Sudan. The ship, Badr 1, was set to leave from Sudan to export the sheep to Saudi Arabia. All crew members were rescued and survived, but only around 700 sheep were rescued.

According to one port official, the sunken ship will disrupt port operations, and the large number of animal deaths will also likely harm the surrounding environment.

Another port official, who spoke to reporters on anonymity, said the vessel was only supposed to carry 9,000 sheep. “The ship, Badr 1, sank during the early hours of Sunday morning,” the senior port official shared. “It was carrying 15,800 sheep, which was beyond its load limits.”

Omar al-Khalifa, head of the national exporters’ association, believes the sheep and the ship could have been rescued, as it took several hours before the vessel ultimately sunk at the pier, as reported by The Guardian.

Saleh Selim, head of the livestock division for the national exporters’ association, has called for an investigation into the sunken ship. Selim said the lost livestock were valued around 14 million Saudi riyals ($3.7 million).

Selim also shared that about 700 sheep were rescued, “but they were found very ill and we don’t expect them to live long.”

This will not be the only ongoing investigation at the Suakin port. Last month, a fire broke out in the cargo area and burned for several hours. It led to costly and extensive damages, and the cause of the fire has yet to be determined or shared publicly.

The port was formerly the main foreign trade hub in Sudan, but has since been replaced by Port Sudan, about 60 kilometers (40 miles) away. A 2017 deal with Turkey was set to restore local, historic buildings, expand the docks, and restore the port was put on hold after the former president Omar al-Bashir was ousted. The country remains in an economic crisis following a military coup, which also led to aid cuts from Western governments.

Why Your Dog Might Need Sunglasses
If you’ve ever been to the beach and watched the
By Cristen Hemingway Jaynes
Illegal Traders Selling Donkey Skins on Social Media
A new report has found traders illegally selling donkey skins
By Paige Bennett
Wild Boar Attacks Prompt Curfew in Seven Roman Neighborhoods
In seven districts in the north of Rome, Italy, residents
By Olivia Rosane