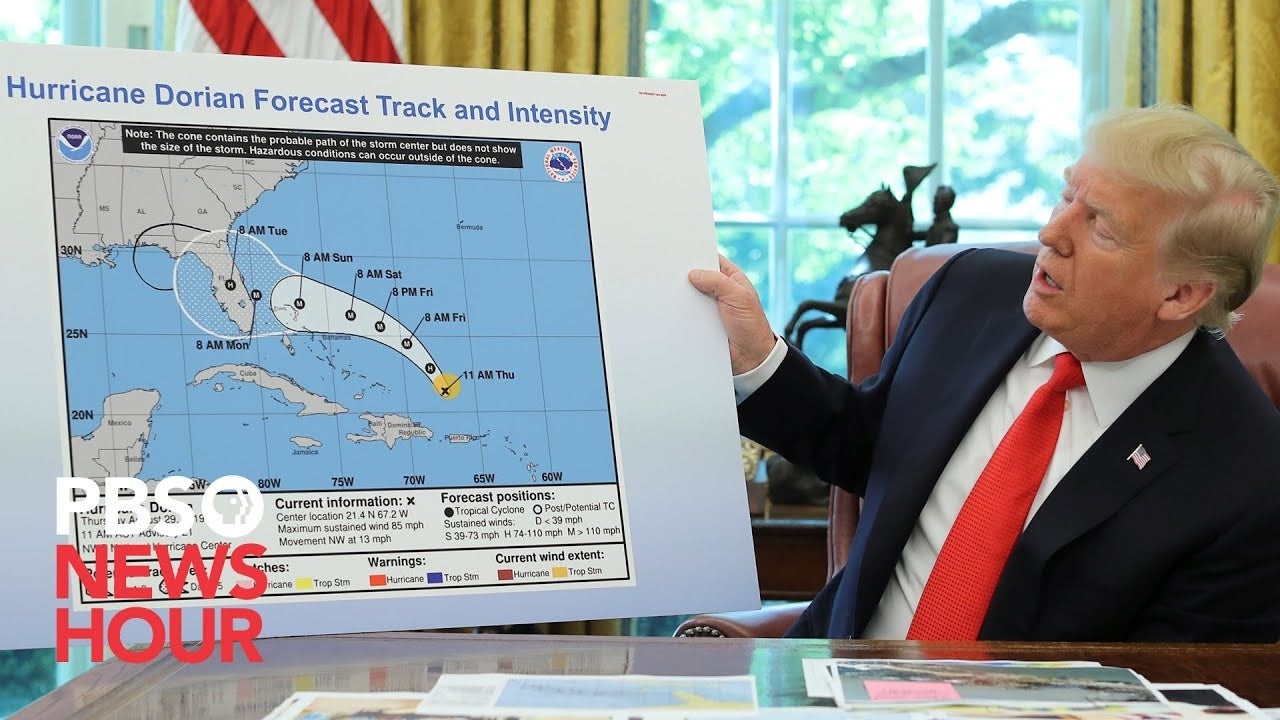 President Trump‘s claim last September that Hurricane Dorian was headed for Alabama’s gulf coast was quickly refuted by employees at the National Oceanic and Atmospheric Administration (NOAA). An independent investigation found that NOAA’s chief violated the agency’s ethics when he backed Trump’s warning and doctored map that used a Sharpie to alter the storm’s path, as EcoWatch reported.

Questions linger as to why NOAA officials decided to support Trump’s inaccurate warnings. Apparently, the U.S. Department of Commerce, which oversees NOAA, does not want the public to know. The Commerce Department has impeded an inspector general’s investigation into whether or not the administration coerced officials into supporting a false narrative and is blocking a release of the report, according to The New York Times.

In a memo from Inspector General Peggy Gustafson to Commerce Secretary Wilbur Ross, she takes the rare step of publicly airing a dispute between an agency inspector general and a cabinet secretary, according to The Washington Post. In the memo, she claims that Ross’ office “thwarted” the publication of her report. She claims that the Commerce Department has claimed that portions of the report cannot be made public, but they have not specified which portions, according to The New York Times.

The department’s refusal to cooperate with the release of the investigation “appears to be directly linked to the content of our report and the findings of responsibility of the high-level individuals involved,” Gustafson wrote, according to The New York Times.

The full report has not been released, but on Monday, a summary was posted that said that the department led a “flawed process that discounted NOAA participation,” and also “required NOAA to issue a Statement that did not further NOAA’s or [National Weather Service’s (NWS)] interests,” as The Hill reported.

That summary also said that NOAA “failed to account for the public safety intent of the NWS Birmingham tweet and the distinction between physical science and social science messaging.”

That failure to account for public safety came from NOAA’s officials walking back a tweet from the NWS Birmingham’s office that said “Alabama will NOT see any impacts from Dorian. We repeat, no impacts from Hurricane Dorian will be felt across Alabama.”

It turns out the unsigned statement that contradicted NWS Birmingham’s tweet was the result of pressure from the White House on Secretary Ross, who oversees NOAA and who threatened to fire the political staff at NOAA unless the contradiction of Mr. Trump was addressed, as The New York Times reported.

The full report was supposed to be released on Tuesday, but it has yet to be released, which prompted the unusual memo from Gustafson. As The Washington Post reported, Senator Maria Cantwell, the ranking Democrat on the Senate Commerce, Science and Transportation Committee, said: “This situation has gone from bad to worse. Secretary Ross must immediately cease this campaign to keep the public in the dark. The Inspector General is doing their job and the public deserves to see the report. Release the report now, Mr. Secretary.”

The Washington Post also noted that this year NOAA’s credibility is particularly important as forecasters are predicting an active hurricane season amidst the coronavirus pandemic, which is seeing a surge in vulnerable states like Florida and Texas. The need to social distance will pose unprecedented challenges for storm preparation, evacuation and response. That means NOAA’s forecasts and advice need to have ironclad credibility since they are integral to public safety.