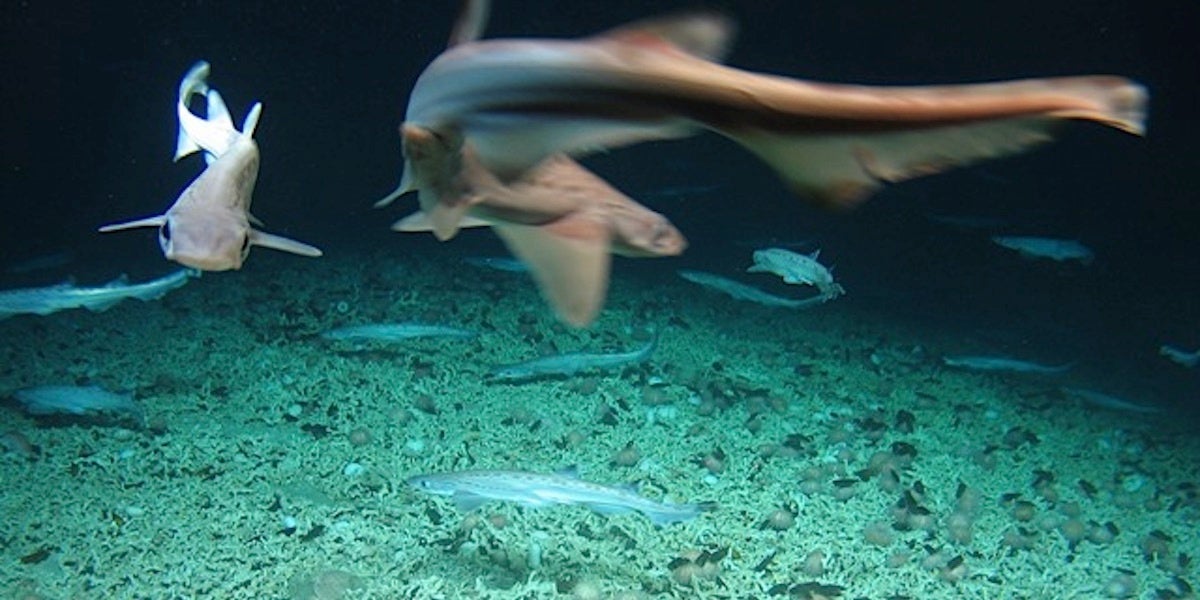 Marine scientists discovered a very rare
shark nursery about 200 miles west of Ireland and shared a mesmerizing video of the find.

Back in July, the government-supported
Marine Institute‘s SeaRover survey found a large school of blackmouth catsharks and what appears to be thousands of their egg cases, also known a “mermaids purses,” at depths up to 750 meters (2,500 feet).

“It was incredible, real
David Attenborough stuff. This is a major biological find and a story of this magnitude would have been on Blue Planet if they’d known about it,” David O’Sullivan, the chief scientist on the SeaRover survey, told the Guardian. “Very, very little is known on a global scale about deep-sea shark nurseries.”

The deep-sea find was announced Thursday at the
INFOMAR Seabed Mapping Seminar in Kinsale, West Cork.

“We are delighted to report the discovery of a rare shark nursery on a scale not previously documented in Irish waters,” O’Sullivan said in a press release. “This discovery shows the significance of documenting sensitive marine habitats, and will give us a better understanding of the biology of these beautiful animals and their ecosystem function in Ireland’s Biologically Sensitive Area.”

The scientists observed a healthy coral reef in the vicinity, which may act as a refuge for the juvenile shark pups once they hatch, O’Sullivan added.

“It is anticipated that further study of the site will answer some important scientific questions on the biology and ecology of deep water sharks in Irish waters,” he explained.

Along with the blackmouth catsharks, the scientists also came across the uncommon sailfin roughshark, which is threatened by trawl and
gillnet fisheries, according to the
International Union for Conservation of Nature.

Maurice Clarke from the Fisheries Ecosystem Advisory Services at the Marine Institute said in the press release that “both species are of scientific interest as Ireland has an obligation to monitor deepwater sharks under the Marine Strategy Framework Directive,” which aims to protect the marine environment across the European Union.