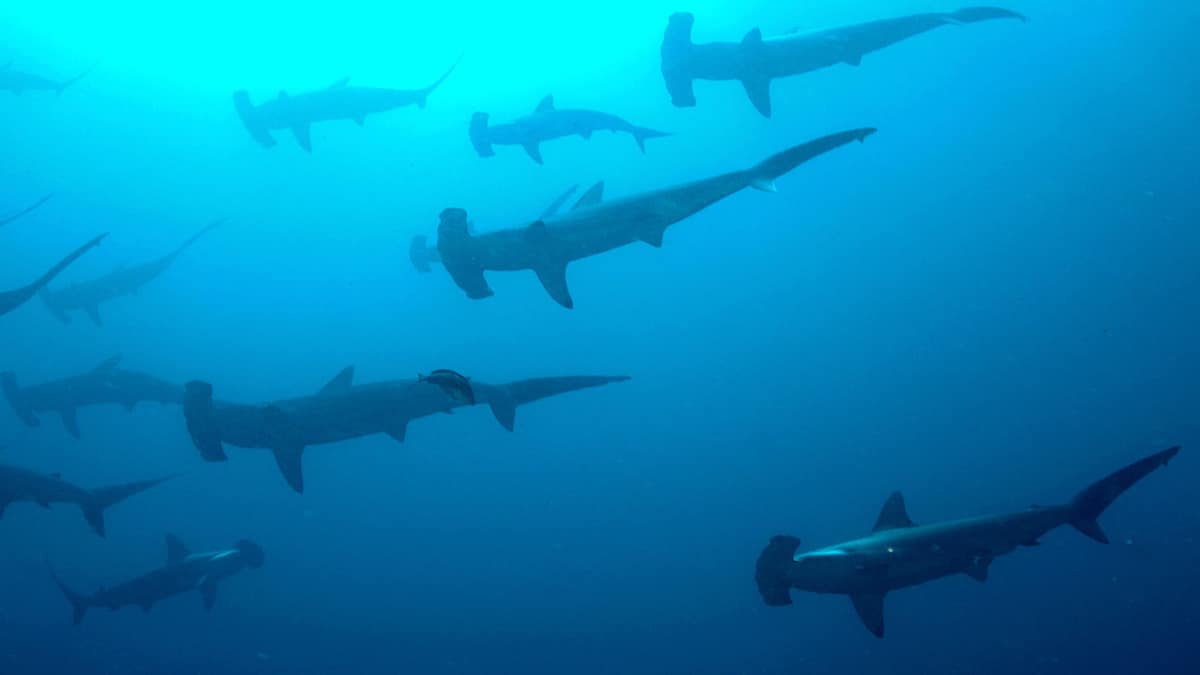 Sharks, unlike other large fish, have skeletons made out of cartilage. Ryan Espanto / CC BY 2.0

A recent fossil discovery could overturn the way scientists think about shark evolution.

Sharks are different from other large fish like salmon or tuna in that they have softer, non-bony skeletons made out of a material called cartilage. It was previously thought that sharks split off from a common ancestor with a cartilage skeleton, before the bony skeletons favored by other fish and all terrestrial vertebrates evolved. But now, researchers have uncovered a fossil that is a common ancestor of both sharks and later fish, and has a bony skull.

“This fossil is probably the most surprising thing I have ever worked on in my career,” study first author and Imperial College London senior lecturer D.r Martin Brazeau told The Guardian. “I never expected to find this.”

Sharks' non-bony skeletons were thought to be the template before bony internal skeletons evolved, but a new fossil discovery led by our life scientists suggests otherwise. 🦈

To find out more watch below or click over to the news story: https://t.co/wy8Ln4Qclt pic.twitter.com/ZQlURtEWLs

The fossil, described in Nature Ecology and Evolution Monday, was dug up in western Mongolia in 2012. It is about 410 million years old and belongs to a group of fish called placoderms that are a common ancestor of sharks and all “jawed vertebrates,” animals with jaws and backbones, an Imperial College London press release explained.

Until now, placoderm fossils had turned up with armored outsides but inner skeletons made of cartilage, enforcing the idea that sharks split from these ancient fish before bony fish evolved, according to The Guardian. But the new fossil, which consisted of a partial skull roof and brain case, was “wall-to-wall endochondral,” or bone, according to the press release.

The fossil represents a new species of placoderm, which the researchers dubbed Minjinia turgenensis. Its discovery is part of a shift in where researchers search for the remains of early fish. Initial finds were dug up in Europe, Australia and the U.S., but now scientists are finding specimens in China and South America.

The bony placoderm was found by a team led by researchers from Imperial College London, London’s Natural History Museum and Mongolia. They decided to dig in an area that had rocks of the right age that had never been examined before, and they still have many finds to sort through.

While the researchers cautioned that one fossil does not make a theory, they think it is now possible that sharks evolved bony skeletons and then “lost” them again. But for sharks, that “loss” would have been an evolutionary gain.

“If sharks had bony skeletons and lost it, it could be an evolutionary adaptation,” Brazeau explained in the press release. “Sharks don’t have swim bladders, which evolved later in bony fish, but a lighter skeleton would have helped them be more mobile in the water and swim at different depths. This may be what helped sharks to be one of the first global fish species, spreading out into oceans around the world 400 million years ago.”

The bony placoderm is not the only evidence for this theory, Newsweek pointed out. In 2015, scientists announced a 380-million-year-old shark that had a skeleton made of cartilage, but with the remnants of what appeared to be bone cells.

University of Cambridge paleontologist Dr. Daniel Field, who was not involved with the research, told The Guardian that it was an example of the complexities of evolution.

“Evolutionary biologists were long guided by the assumption that the simplest explanation – the one that minimised the number of inferred evolutionary changes – was most likely to be correct. With more information from the fossil record, we are frequently discovering that evolutionary change has proceeded in more complex directions than we had previously assumed,” he said.