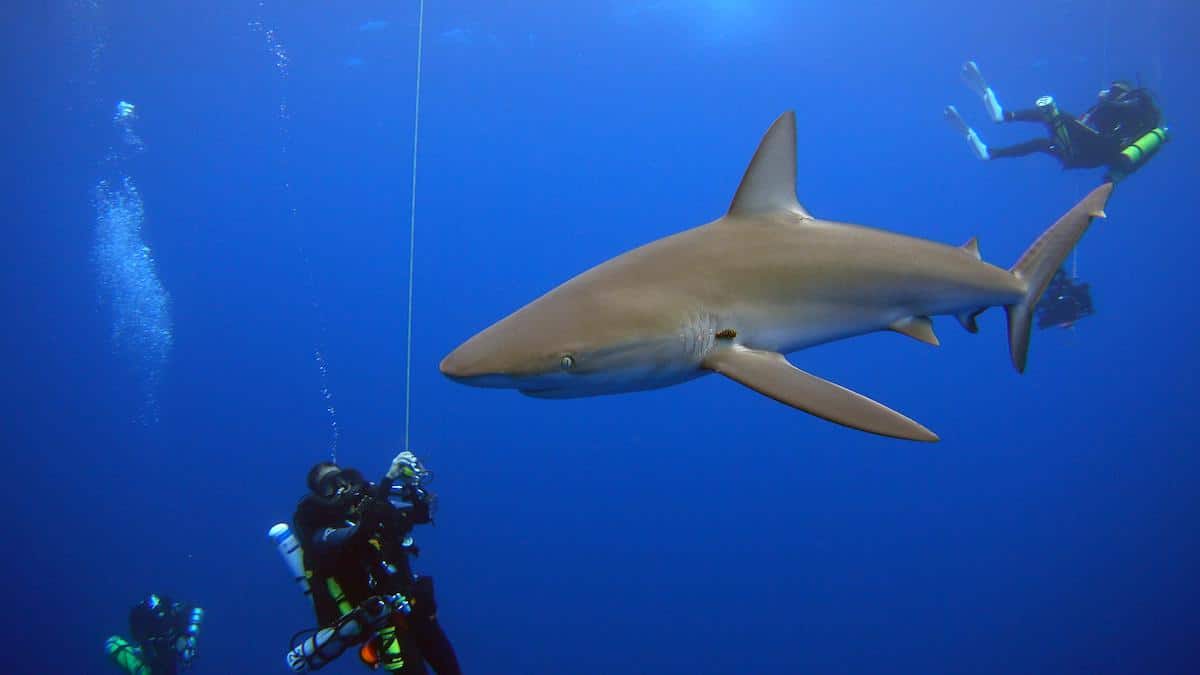 This September a team of dozens of scientists announced grim news: Around one third of the world’s 1,199 known sharks and related species, they assessed, are now threatened with extinction.

The startling message from members of the IUCN Shark Specialist Group, which published their results in the journal Current Biology, means that sharks and their relatives are much worse off than previously understood. The last global assessment of shark species, published in 2014, found 24% of species at risk.

The more complete — and more worrying — picture of the extinction risk for these species provides critical information for conservationists, scientists and policymakers, as well as the people who live and work near shark populations.

But getting there, especially during a pandemic, posed more than a few challenges.

Gathering the data needed to assess — and reassess — nearly 1,200 species required a staggering amount of work, involving 353 experts from more than 70 countries who met during 17 different week-long regional workshops stretching out over more than five years.

Before the pandemic hit, the core team racked up a ton of frequent flier miles. “We had to submit over 340 travel expense reimbursement claims,” says Nick Dulvy, a professor at Simon Fraser University and the lead author of new shark assessment. 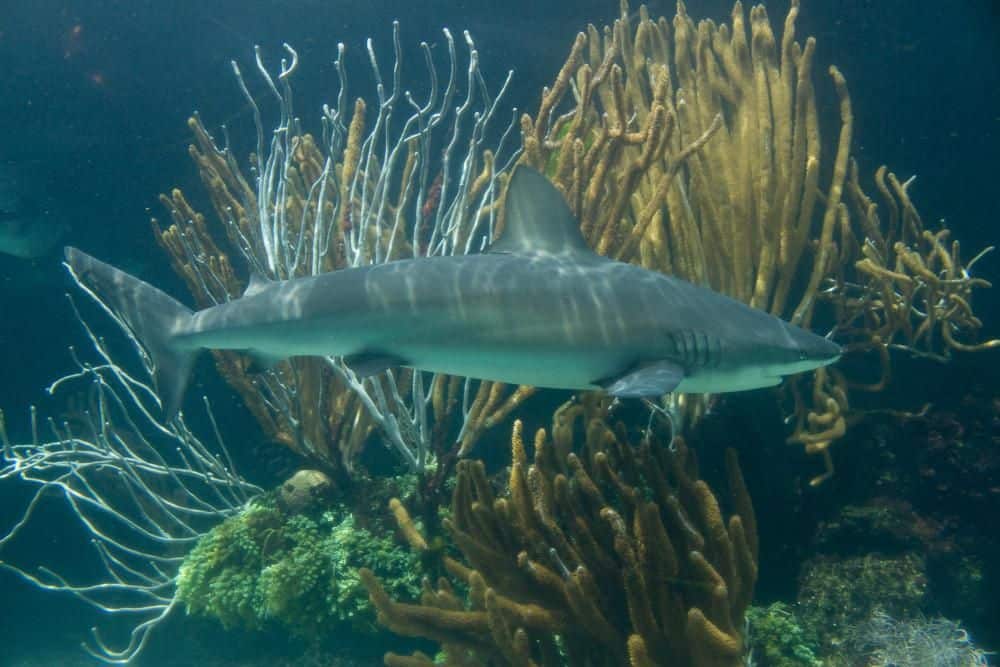 Many workshops took place at academic institutions or hotel meeting rooms. One was held in the atrium of an aquarium — which seemed like a fun idea until school groups full of excited (and loud) children arrived.

After Covid-19 travel restrictions arrived, the process shifted online. That required everyone to work odd hours to accommodate job and home schedules for colleagues in all sorts of time zones.

But it wasn’t just science that made the work possible; organizers and participants also credit the model, which prioritized respect, diversity and inclusion, cooperation and trust.

Regional workshop organizers made sure to invite and include local experts, including at least one from each country being discussed. For example, 2017’s Arabian Seas and Adjacent Waters workshop included representatives from Somalia, Oman, India, the Maldives Sudan, Sri Lanka, Pakistan, Iran and the UAE.

“Being able to understand what’s happening on the ground is important,” says Rima Jabado, lead scientist for the Gulf Elasmo Project and chair of the IUCN Shark Specialist Group. “A room full of Westerners can’t effectively talk about conservation problems in a country they’ve never been to, and conservation challenges can be difficult to interpret if you don’t know the local context. We made the choice to go to these countries, bringing people together, which was great not just for analyzing all this data, but for forming new collaborations and relationships.”

Ensuring gender equality of participants was also a priority for organizers, as was inviting a range of professionals.

“We don’t just invite academics, but also representatives from environmental nonprofits and government fisheries agencies,” says Dulvy. “We might have been able to get some of the information we needed via email, but we need to know what sharks are caught by what gear types where. People with real-time recent experience with the local system are much more helpful.” 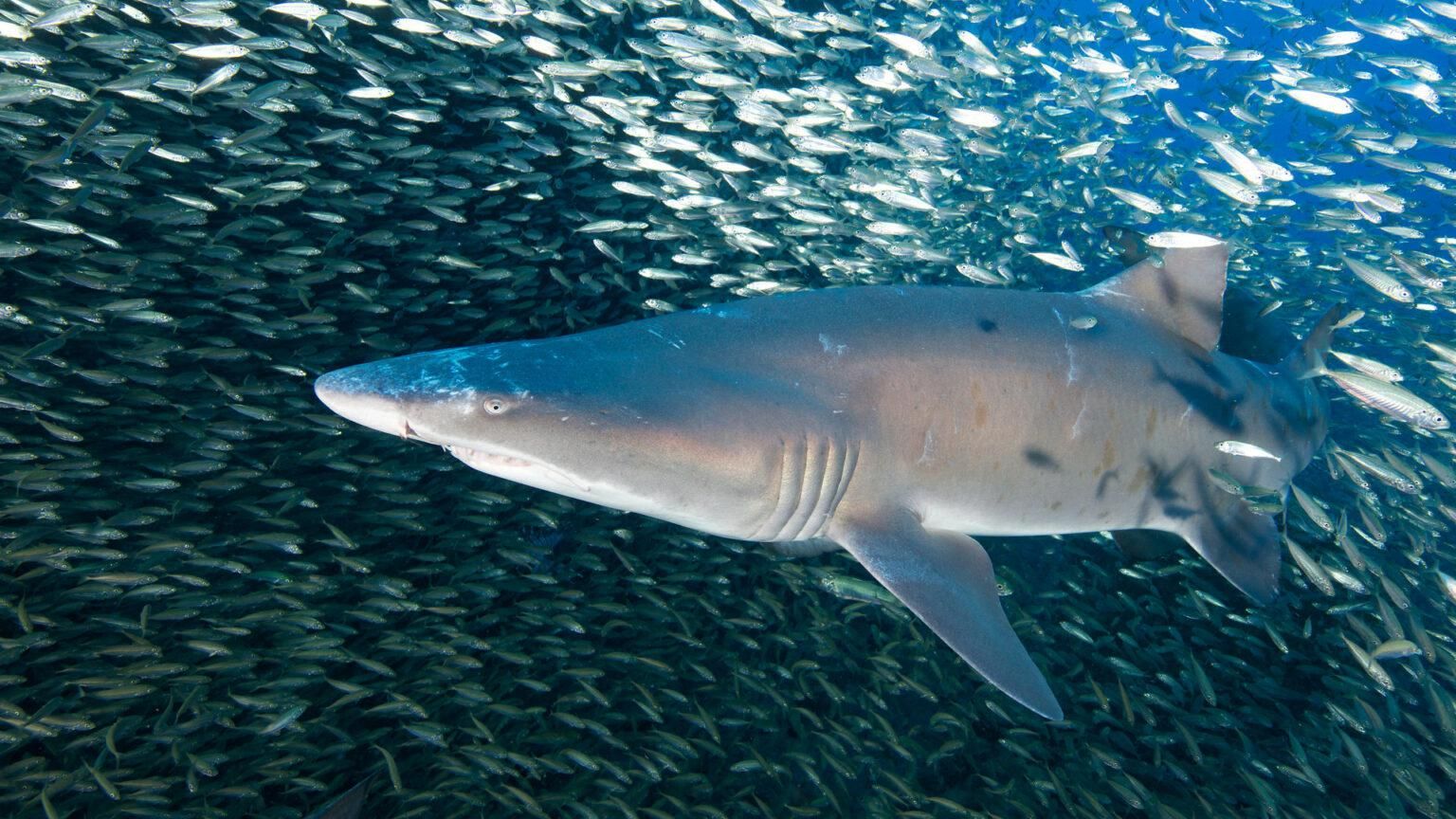 The inclusive model used serves in stark contrast to the problematic practice of “parachute science” or “colonial science,” in which researchers from wealthy countries visit field sites in the global south to collect data but don’t work with or help local experts.

That commitment to inclusivity garnered praise from outside experts.

“Building mutually respectful, equal partnerships that are beneficial to the location in question is absolutely key here,” says Asha de Vos, founder and executive director of the Sri Lanka-based conservation organization Oceanswell, who was not a part of this study. “If we’re making decisions about our common heritage, we need to be inclusive when moving those decisions. We need everyone at the table, and we need to empower the people on the ground.”

Prepping the People and Information

Getting the people together was one thing. Gathering, condensing and analyzing the data was another.

It started with a core team of Shark Specialist Group experts who attended multiple workshops and compiled all the data from the 1,199 species assessments. The core team served as authors of the summary paper, while many of the invited local experts became coauthors on the individual species assessments. Since these local experts came from a variety of fields with a variety of areas of expertise, everyone needed to complete IUCN Red List training in advance to understand how their data fit into the IUCN assessment scheme. Red List categories are complex, quantitative, and use very technical language, so it was important to make sure that everyone was using the same definitions of terms before, for example, deciding if the data showed that a species was critically endangered. 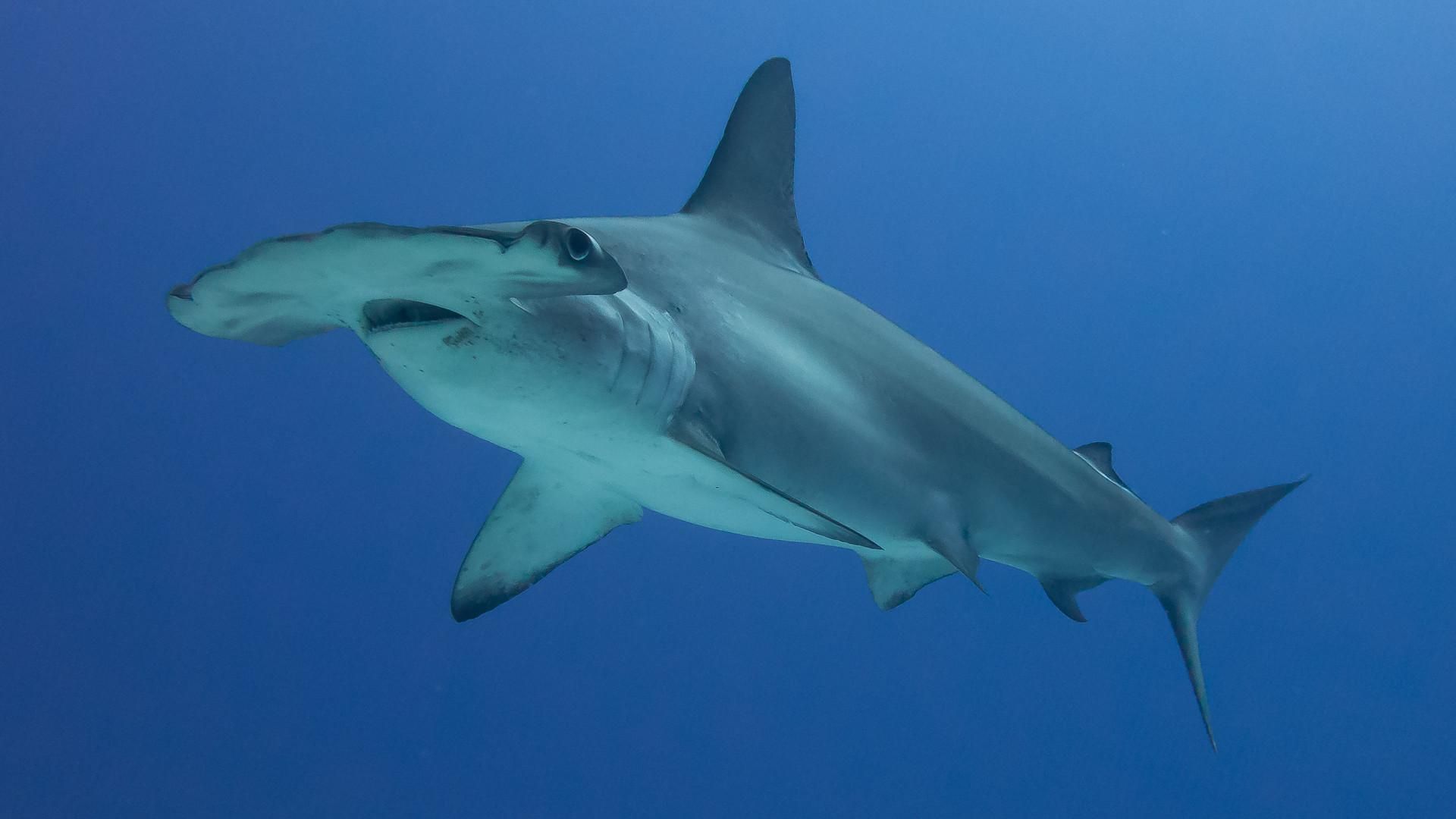 The training also emphasized the need to come up with scientifically rigorous results.

“You need to come in here in an objective way and look at the data and be honest about what’s happening and not happening,” Jabado says. “The IUCN is very science-based, and we can’t assign a status to species [just] because it will give us funding or be a problem for managers.”

Once everyone was on the same page, the real work began. Prior to the workshops, participants prepared background briefings on local conditions and key species, along with summaries of new and relevant scientific literature for everyone to read. Determining the Red List status for each species required data on their distribution, their overlap with threats, their reproductive biology and, whenever possible, their population trends. (A common misconception is that a Red List assessment of “data deficient” means that scientists know nothing about the species and any random bit of new knowledge is helpful for their conservation, but really it only means we don’t have data on population trends over time.)

While the actual deliberations of Red List workshops are confidential, organizers told me that in general these workshops were where the data crunching and any associated discussions or deliberations occurred. And these discussions are where local expertise is critical — a Western scientist half a world away can read a spreadsheet emailed from Indonesia, but sometimes local experience provides key context and greater understanding. Local experts may also be aware of important data sources others may not have, such as fishing records or scientific papers published in non-English journals.

It’s also during these meetings that teams of experts get to know each other, sometimes resulting in long-term regional or global collaborations. Organizers told me that several research collaborations around the world began as conversations during coffee breaks at Red List workshops, a clear emergent benefit of this model.

After the workshops, when people went home (or logged off Zoom), the writeups for each species were finalized. When all assessments and reassessments were complete — for example, the new assessment that recategorized Caribbean reef sharks from “near-threatened” to “endangered” — the team began to write the summary paper.

That’s when they found the staggering and sad results that made headlines.

The Result: An Index of Loss and Hope

Each shark and related species, except for the handful of species discovered since 2014, received updated IUCN Red List conservation assessments as part of the process.

That helps determine conservation priorities for individual species, but the bigger picture of risk to entire categories of species — such as mammals, amphibians or corals — emerges from what’s known as a “Red List Index,” which shows how Red List assessments have changed over time. The summary paper determined a Red List Index for sharks for the first time and showed their collective decline on a par with other threatened species groups.

“Putting sharks on the Red List Index puts them in front of the eyes of policymakers,” says Dulvy.

He says this is particularly important, because previous Red List Indexes didn’t include any marine vertebrates.

Because of that, the existing indexes also didn’t document one of the major dangers facing species around the world. “What was missing from this picture was an indicator showing the biggest threat to the oceans: overfishing,” he says.

For sharks, overfishing poses a threat to 100% of at-risk species, and the sole threat to 67% of them. The rest face threats from overfishing combined with habitat loss, climate change and pollution. 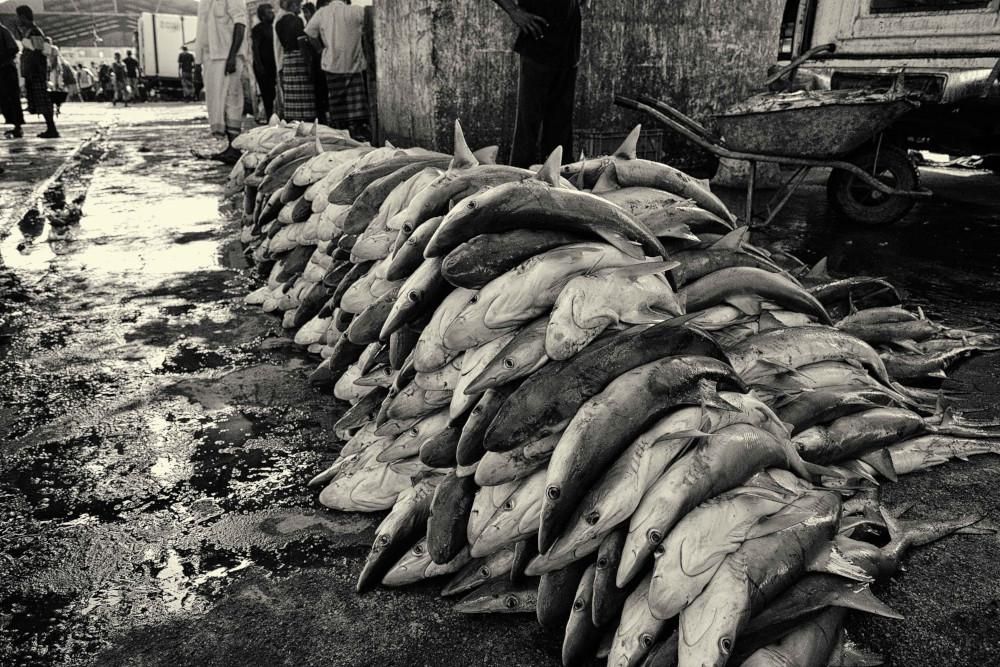 All told, the new assessment identified population declines for multiple shark species — mostly due to overfishing — as well as three probable extinctions of species that haven’t been observed in more than 80 years.

That weighed heavily on the participants.

“Any one person might work on one species, and you know what’s happening and you think it’s bad, but you think maybe it’s just me,” Jabado says. “But when you sit in a room and hear the same story for so many other species, it’s depressing.”

While this global perspective of the impacts of overfishing on marine life is scary, at the same time, she adds, the process created some sense of hope.

“We can’t make progress unless we’re working together,” she says. “Conservation can be very depressing, but being in a room full of passionate, dedicated people is inspiring.”