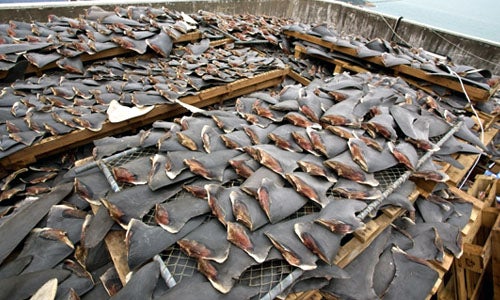 Kameron Schroeder is currently a student and football player at Duke University, where he is pursuing a major in Environmental Science and Policy. His interest in the environment has come from many days spent enjoying nature, including his favorite trip, scuba diving in Maui, Hawaii with a marine biologist. 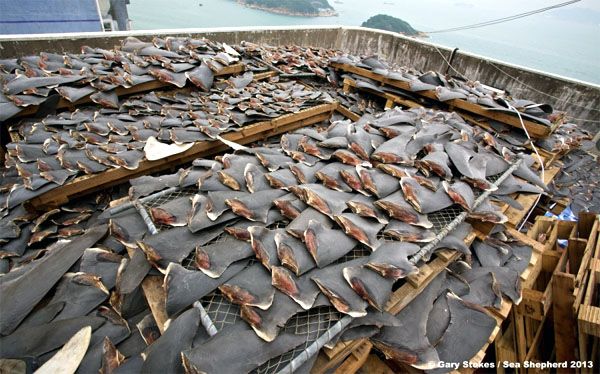 Shark fins being laid out to dry before being sent to market. Photo Credit: Gary Stokes / Sea Shepherd

After a meeting in Genoa, Italy on Nov. 17, the International Commission for the Conservation of Atlantic Tunas (ICCAT) failed to implement a U.S.-proposed measure to eliminate the practice of shark finning. ICCAT currently has 49 contracting governments and, though they mainly focus on tuna, they manage 30 species including sharks. The measure, which would require fisherman to land sharks with their fins attached, would have greatly reduced the number of sharks that could be killed, as fishing boats have a limited carrying capacity.

This is the sixth year a measure against shark finning has been proposed at the annual ICCAT conference, and the repeated failures are beginning to worry those opposed to shark finning. Lack of action has led many to claim that ICCAT is forgetting about the other fish they are supposed to protect besides tuna. The repeated failures of bans on shark finning are suspected to be caused by the continued demand for shark fin soup, which fuels a multi-billion dollar industry in China and other parts of Asia.

Every year, some 100 million sharks are killed to make shark fin soup, a Chinese delicacy served primarily at weddings and on special occasions like holidays and birthdays. The sharks are “finned,” a process that involves cutting off all of their fins and then tossing the bodies—still alive—back into the sea. The sharks sink to the bottom of the sea and, because they must swim in order to pass water over their gills, they suffocate. Not only is this process extremely inhumane, but it is destroying our ocean ecosystems.

Sharks play a vital role in the ecosystem. They are considered a keystone species, and thus, cannot be replaced by any other animal when removed from the ecosystem. Without sharks to regulate other species of predator fish, the number of prey species in the ecosystem is impacted. This causes a complete disruption of the ocean ecosystem, causing the population of many fish species to plummet, including many species of fish that we eat regularly such as tuna. Sharks also have very low birth rates, as they do not mature in some species, such as the Great White, until 15 years of age, making the process of finning even more decimating to their populations as a whole. 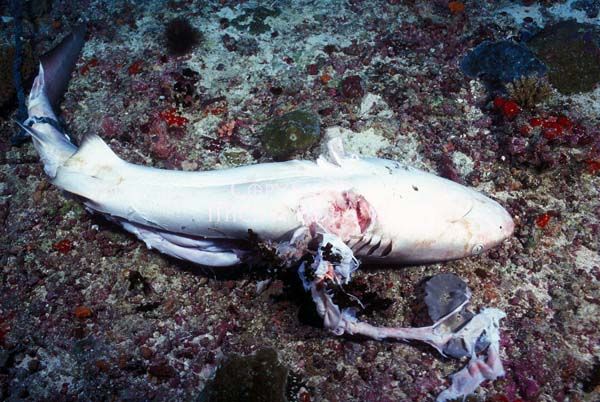 Shark dead on the ocean floor after being finned alive and then tossed back into ocean. Photo Credit: Michael Aw

Once reserved for only royalty, shark fin soup has become much more commonplace due to improvements in modern fishing that make the catching of sharks easier. The idea that shark fin soup is a part of the culture of the Chinese is a widely used argument when defending the process of shark finning. However, the shark fin itself is not even an important part of the soup according to many who have tried it. Chef Gordon Ramsay, an environmental activist and famous for popular television shows such as “Hell’s Kitchen” and “Kitchen Nightmares,” finds the practice of using shark fins in shark fin soup extremely unnecessary. He said the broth itself tasted extremely good but the fin itself “actually tasted of nothing, almost like sort of plain glass noodles.”

For us to cause such an extreme environmental impact over shark fins, something that adds nothing to the soup it is used in, is outrageous. On top of the environmental impact, many studies show that consumption of shark fins can cause sterility in men and other health impacts due to the high mercury levels in sharks. Though many states (California, Delaware, Hawaii, Illinois, Maryland, New York, Oregon and Washington) in America have banned the possession and sale of shark fins, they are still consumed illegally in these states and legally in many other parts of the U.S.

So what can you do? Petition your local legislature and government to implement bans against the possession and sale of shark fins. If you don’t want to do this directly, you can support Sea Shepherd and Fin Free. Also, if you are thinking of serving shark fin soup at an event, refrain from doing so. If that is not possible, simply replacing the shark fins with noodles or some other protein source such as chicken will leave the flavor of the soup intact but eliminate the decimation of shark populations and our ocean ecosystems. If we continue to fish sharks at current rates, they will become extinct within our lifetime. Don’t allow your children to grow up in a world where sharks are only seen in a text book. Do the right thing, don’t consume or serve shark fin soup and be “Fin Free.”