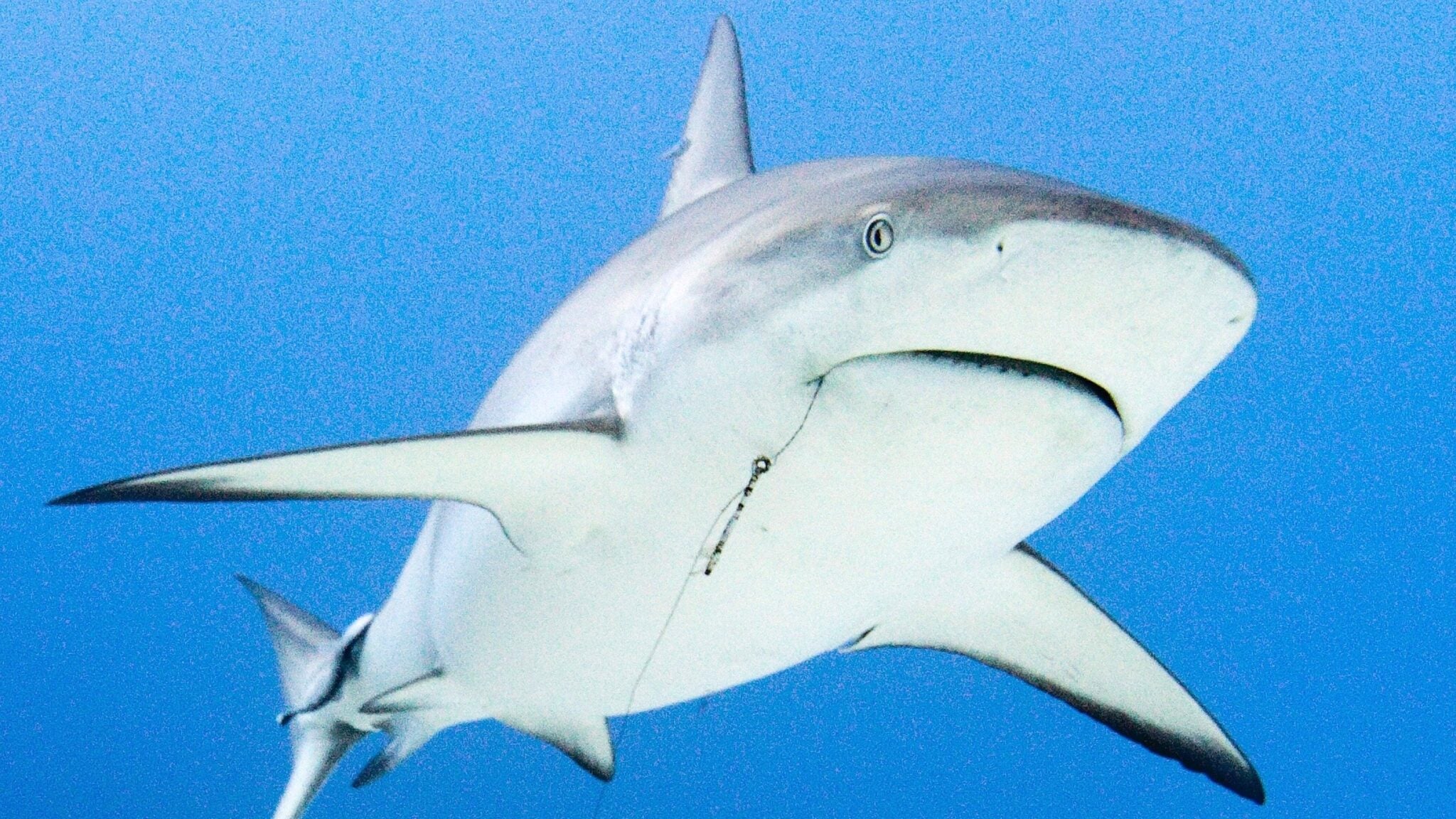 Every year, fins from as many as 73 million sharks circulate throughout the world in a complex international market. They are the key ingredient in shark fin soup, a luxury dish considered a status symbol in some Asian cuisines.

The global trade in shark fins is contributing to a crisis among shark populations worldwide. Sharks are being killed 30 percent faster than they can reproduce, and the fin trade is one of the main culprits. Up to one-quarter of all species of sharks and their relatives are at risk of extinction. Some shark populations have declined by nearly 90 percent in recent decades. The disappearance of sharks can harm fragile ocean ecosystems, because as top predators, sharks help balance the populations of species below them in the food chain.

Additionally, many of the fins traded are obtained through the brutal, inhumane practice known as finning, in which fishers at sea catch sharks, slice off their fins and throw the animals — usually still alive — back into the water. Unable to swim without their fins, the sharks drown, bleed to death or are eaten alive by other fish. Because space on boats is limited and fins are by far the most valuable part of the shark, fishers have an incentive to use this cruel method to get fins.

However, the tide is turning against the shark fin trade.

In November 2019, the U.S. House of Representatives issued a resounding bipartisan “no” to this cruel practice, voting 310 to 107 to pass a bill banning commercial trade of shark fins and products derived from shark fins in the U.S. The Shark Fin Sales Elimination Act, led by Representatives Gregorio Kilili Camacho Sablan (D-Northern Mariana Islands) and Michael McCaul (R-Texas), would prohibit all purchase, sale and possession for commercial purposes of these parts and products. The legislation builds on previous laws passed by Congress — the Shark Finning Prohibition Act of 2000 and the Shark Conservation Act of 2010 — which banned the act of shark finning in U.S. waters and the transport on U.S.-flagged vessels of shark fins not naturally attached to a shark carcass.

The action has now moved to the U.S. Senate, where a third of the members have sponsored a parallel bill, S. 877, introduced by Senators Cory Booker (D-New Jersey) and Shelley Moore Capito (R-West Virginia). Already the Senate Commerce Committee has cleared this bill for potential floor action.

States are also taking up the fight. In January, New Jersey Gov. Phil Murphy signed a bill into law that bans the sale and trade of shark fins in the Garden State. The state’s general assembly had approved the bill by a vote of 54 to 19, and the state’s senate passed its version of the bill by a vote of 33 to 6. These vote tallies reflect the will of the state’s constituents: In a recent survey, a majority of New Jersey voters said they would support a prohibition on the sale, possession and trade of shark fins.

The current to stop the shark fin trade is also flowing internationally. In June 2019, Canada, the largest importer of shark fins outside Asia, passed a bill that includes measures to prohibit that country’s trade in shark fins as well as the act of finning in Canadian waters. Worldwide, nearly 60 airlines and container shipping companies — including Air China, Eastern Air Logistics (the parent company of four major Chinese airlines) and Maersk, the world’s largest shipping line — have banned the transport of shark fins. Many high-end restaurants and hotel chains in Asia have also stopped serving shark fin soup. Demand for the soup is declining but not quickly enough to save sharks on its own.

While finning in U.S. waters is already prohibited, current law is not enough because once shark fins are on land, they can be sold. Furthermore, U.S. participation in the global fin market continues to fuel the practice in places that lack shark-finning bans or adequate shark management and conservation policies.

It is impossible to guarantee that shark fins are humanely and sustainably sourced. That is because once a fin is detached, it is impossible to know where it was obtained, or whether it was sliced off a shark at sea or removed after the shark was brought to shore. It is also difficult to determine the species of the shark. For the most part, shark fins sold in the U.S. do not come from U.S. fishers. Because of this, fins sold here can come from sharks that were finned, or from endangered or threatened shark species.

Our role is magnified by the fact that the U.S. is a major transit hub for international shark fin shipments. Latin America is one of the most significant shark fin-producing regions, and many of these countries transport shark fins through U.S. ports. Some Latin American nations ship as much as one-third to one-half of all their shark fin exports through the U.S. In fact, on February 3, almost 1,400 pounds of dried shark fins worth around million were found by wildlife inspectors in Miami. The shipment is believed to have originated in South America and was likely headed to Asia.

Still, banning the shark fin trade in the United States has its opponents. They argue that U.S. shark fisheries are already well managed. In reality, however, fewer than 20 percent of U.S. shark stocks are considered sustainable. They also argue that it is wasteful for fishers to land a shark and not be able to sell its fins. By that standard, not selling the ivory from a dead elephant is wasteful, too — but as a nation, we have decided that the broad well-being of all elephants supersedes that pernicious use of their tusks.

Fishing industry advocates claim that banning the fin trade would have harmful economic impacts. The truth is, though, that sharks are worth much more alive than dead. In 2016, shark-related diving in Florida produced more than 1 million in revenues and more than 3,700 jobs. Moreover, fishers would still be able to sell the meat and other products from the sharks they land. In states where the shark fin trade has been banned, there is no evidence of negative impacts to the commercial fishing industry.

Finally, some believe we can address the shark crisis not by changing our own practices, but simply by requiring other countries to improve their shark fishing methods. The latter is an unrealistic goal. The low percentage of U.S. shark stocks known to be sustainable underscores how difficult fisheries are to manage, even here in one of the world’s richest and most technologically advanced nations. Additionally, when the U.S. leads, other countries follow. After we banned commercial trade in ivory, many other nations followed suit, including China, the European Union and Australia.

Simply put, the U.S. must remove itself from the cruel and ecologically damaging global shark fin trade. Americans overwhelmingly oppose it, and we are in a position to set an example for the rest of the world.

Join the wave for a U.S. shark fin ban. Call your two U.S. senators and ask them to support S. 877, the Shark Fin Sales Elimination Act.

Sharks are worth more alive than in a bowl of soup.