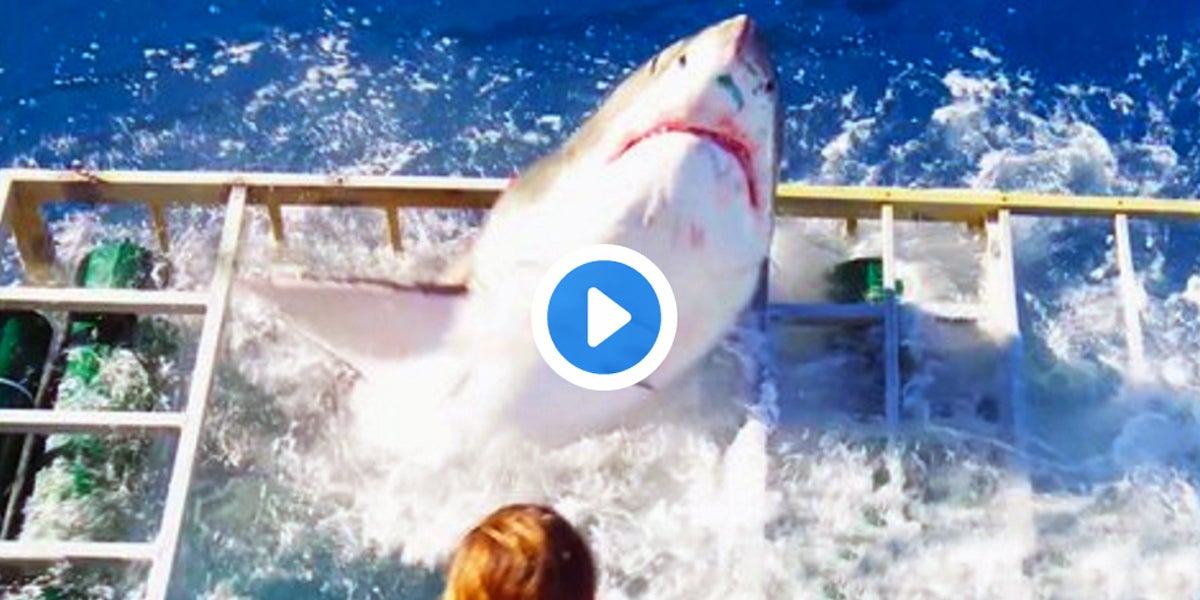 By now you might have seen the terrifying video of a 10-foot great white shark breaching a diver’s cage off Isla Guadalupe in Mexico. Although the operator of the diving vessel, Solmar V, has called this a “one in a million” occurrence and the diver escaped unharmed, interesting questions have been raised about the broader use of wildlife as entertainment.

Coming face-to-face with a great white shark is a dream for many adrenaline seekers and can be a lucrative source of tourism dollars for shark encounter operators. According to The Guardian, Isla Guadalupe is a major hotspot for great white shark cage diving, with excursions as low as $100 or as high as several thousand dollars.

During a dive, tourists are submerged underwater in a steel cage as chum is thrown from boats to lure sharks. Critics argue that feeding or baiting a wild shark with chum might affect its natural behavior and put people at risk. Florida has banned the feeding of sharks for this reason.

“When people feed sharks, it can change their behavior and cause them to start associating people with food,” Ryan Brown, spokesman for Sen. Bill Nelson, D-Fla., told the Sun Sentinel last month. “This puts divers at risk, especially those who aren’t diving in a protective cage. Florida law prohibits shark feeding in state waters, but the practice is currently unregulated in federal waters further from shore.”

Solmar V managing partner Jorge Cervera Hauser said that the company has been injury-free since it opened in 2004 and that their cages have been inspected and reinforced.

“There is always room for improvement and measures are being taken so that incidents like this don’t happen again,” Solmar V wrote in a Facebook post.

Overall, shark attacks are rare. According to Oceana, “over the past five years (2006-2010), an average of 4.2 fatal shark attacks have taken place each year worldwide.”

And what about the safety of the sharks themselves?

Take this video for instance. You may have noticed that the shark was bleeding from the gill and the dorsal fin. These great predators cannot swim backwards, making it more difficult for the creature in the video to escape from the cage. Sharks cannot close their eyelids to protect their eyes when attacking prey, adding a measure of unpredictability.

“When a great white shark lunges and bites something, it is temporarily blinded,” the cameraman wrote in a description for the video. “They also cannot swim backwards. So this shark lunged at the bait, accidentally hit the side of the cage, was most likely confused and not able to swim backwards, it thrust forward and broke the metal rail of the cage.”

The shark did not suffer any serious injuries, Hauser said. Additionally, sharks are not usually harmed in any way from shark cage diving activities.

“We have to show people these animals to ensure their survival,” he told Responsible Travel. “It’s no different from viewing leopards and lions.”

Great white sharks are currently listed as “vulnerable” on the World Wildlife Fund website. The organization states that these sharks are “decreasing in numbers and are rare due to years of being hunted by man for fins and teeth, and often as a trophy for sport fishing. The great white shark is often caught as bycatch by commercial fisheries and can also become entangled in meshes that protect beaches.”

“Shark cage diving has not ended the Asian market for shark fin soup, or countered overfishing, or preserved ocean habitats or passed legislation to ban the killing of specific species of sharks. Nor have I ever met a reputable marine biologist who condones the commercial business of shark cage diving,” Evans wrote. “In my opinion, shark cage diving makes a mockery of real conservation efforts to preserve an animal that is in rapid decline (so far, we have lost 90% of the world’s shark population since 1950).”