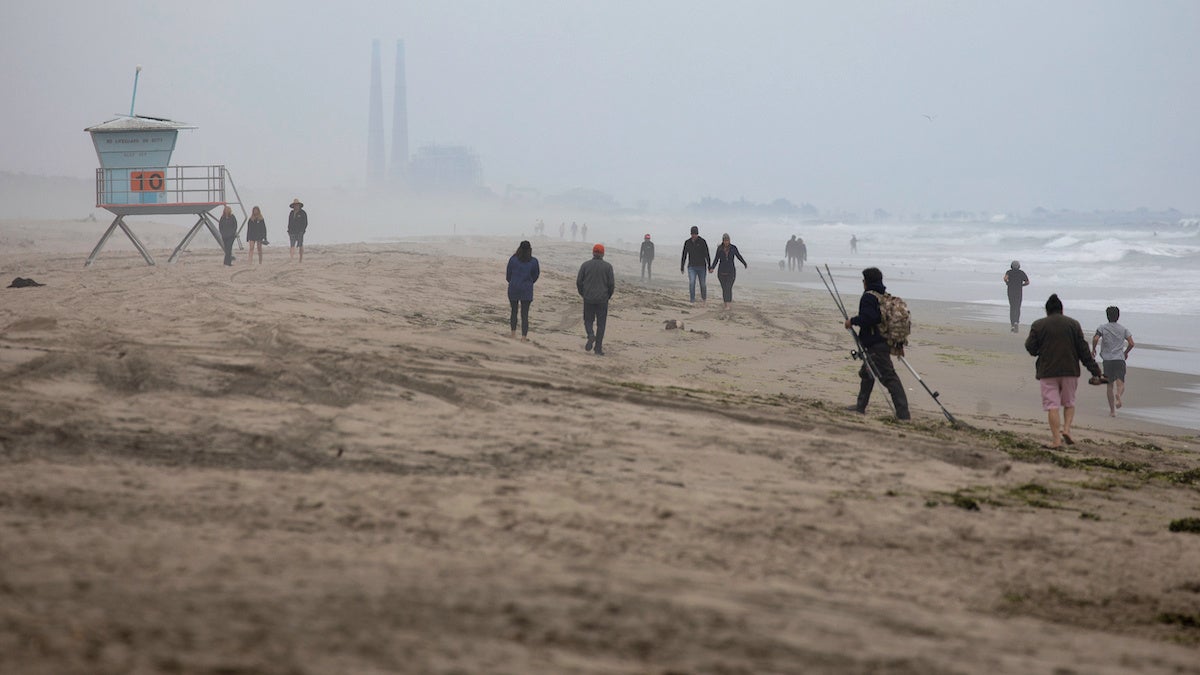 Beachcombers walk along Manresa State Beach in Santa Cruz County, California on May 9, 2020, after a shark attack claimed the life of a surfer. Karl Mondon / MediaNews Group / The Mercury News via Getty Images

A 26-year-old man was killed by a shark as he was surfing near a state beach in Northern California on Saturday, according to authorities, as The New York Times reported.

Ben Kelly was roughly 100 yards from shore at Manresa State Beach near Santa Cruz when a shark attacked him around 1:30 p.m., the California Department of Parks and Recreation said on Sunday, according to The New York Times. While the beach was closed to encourage social distancing, the water was open for people to engage in water sports, like surfing and swimming.

A witness flagged down a lifeguard patrolling the area. Since the attack, the beach and water are now closed until May 14. The water is off-limits for one mile north and south of the attack and signs have been posted to inform potential beachgoers of the presence of sharks, according to the AP.

Monterey Bay drone photographer Eric Mailander told KRON he has observed dozens of great white sharks swimming near the shoreline in recent days. He said he counted 15 sharks while out on his boat Saturday morning, as the AP reported.

The species of shark that attacked Mr. Kelly is still unknown, the Department of Parks and Recreation said in a statement.

Simon R. Thorrold, a senior scientist in the biology department at the Woods Hole Oceanographic Institution in Falmouth, Massachusetts, said in an interview that his “best guess” was that it was a great white shark, as The New York Times reported.

“White sharks are big enough and their teeth are so sharp that even a halfhearted attempt will cause significant injuries,” he said.

Fatal shark attacks are rare along the Northern California coast, although it is a major breeding ground for the great white shark, according to KPIX, San Francisco’s CBS affiliate. There have been at least two other fatal attacks since 1984, KPIX noted, but those involved divers. In March, a shark bit the board of a paddleboarder near Capitola, narrowly missing him, according to the sheriff’s office.

“Hippos kill way more people every year than sharks do,” Thorrold said to The New York Times. He added that while sharks prefer not to eat humans, the silhouette of a surfboard with a paddling surfer can resemble a seal from under the water.

“Seals are part of their natural prey,” Thorrold told The New York Times. “It is not unreasonable to think that the shark thinks it is a seal and gets to the surfer and realizes pretty quickly it does not want to eat it. By that time, the shark has done enough damage to the human that it can end in tragedy.”

According to The Washington Post, Kelly described himself as a self-taught surfboard shaper on his company’s website. He wrote that his boards are “well represented here at home in Santa Cruz, California” as well as in Bali, South Africa, Mexico, Central America, Peru and Hawaii. Video posted on the site shows him shaping a surfboard.

“What started as a way to fuel my own surfing passion has now become a way to stoke out my fellow surfers, and that is truly fulfilling for me,” Kelly said in his bio. “It’s the way I have found to give back to others.”

On the other side of the world, a shark bit a French surfer in Australia, but the surfer was able to get away. Video of the incident shows Dylan Nacass and Matt Sedunary yelling and scrambling to get away from a stalking shark, as The Guardian reported.

Nacass, 23, punched the shark twice when it attacked him at Bells Beach in Victoria, according to Sky News. He needed stitches for his puncture wounds.

“I punched him one time, he stay in my legs. Two times after, he go,” he told television news in Australia.

Matt Sedunary heard screaming and thought Nacass was joking around. After realizing the seriousness of the situation, he rushed to help, as Sky News reported.

“I’m not gonna just ditch this guy,” he said. “Most people would do the same thing.”