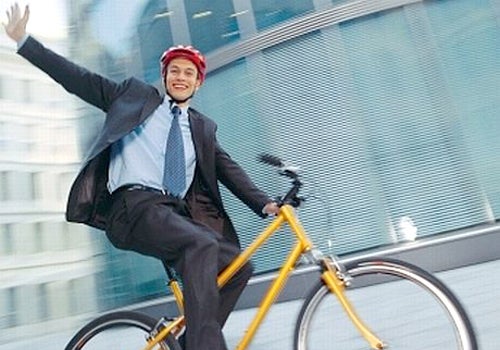 In San Francisco we celebrated Bike to Work Day last week, but so many people are riding their bikes to work here that every day seems like Bike to Work Day. Bicycle ridership is up by 72 percent in the past six years. This has become a much more bicycle-friendly city during the past decade, but the upward trend is national, too. Bicycle commuting in the U.S. was up by 40 percent from 2000 to 2010, and in the largest “bicycle friendly” communities (as identified by the League of American Bicyclists), it was up by 77 percent.

That’s great, but it’s only scratching the surface of how biking could transform our country. Most people don’t commute to work by bike. Most of us don’t even use bikes for any of the relatively short trips we make to and from our homes. Forty percent of all car trips are to destinations less than two miles from home. If every American driver made just one of those trips each week on a bicycle instead of a car (going to church, for instance, or to the health club), we would collectively save nearly 2 billion gallons of gas in a year (not to mention about $7 billion).

I suspect that if you asked people why they don’t use a bike for those short trips, you’d hear one answer more than any other: “I just don’t feel safe riding in traffic.” That’s understandable, because most of our roads and cities have been engineered for the safety and convenience of drivers—not bicyclists. The solution is twofold: Better education for both drivers and cyclists on how to safely share the road and, even more important, an investment in reconfiguring our transportation infrastructure so that bicyclists and pedestrians can both feel and be safer.

We need to do this not just because it saves on gas, helps the environment and makes us healthier. We need to do it because many Americans do not drive at all—about 100 million as of 2009 (and that number will increase as our population ages). Walking or biking (as well as public transit) are the only ways these people can get somewhere on their own.

After decades of assuming that only cars matter, we really should be playing catch-up on behalf of other transportation modes. Currently, Americans make about 12 percent of all trips by biking or walking. So what if we invested 15 percent of our federal transportation funding on bicycle and pedestrian infrastructure? Too generous? How about 10 percent?  Five percent? Believe it or not, five percent would still be more than three times as much as we’re currently investing now, which is a measly 1.6 percent.

Unfortunately, Big Oil’s political allies think that even 1.6 percent is too much.

This is National Bike Month. What better time to tell our leaders that we need to invest our transportation dollars fairly? Because everyone deserves access to clean, affordable transportation choices.