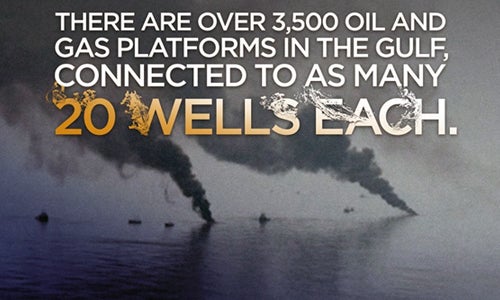 My new film, The Great Invisible, documents the 2010 BP oil spill in the Gulf of Mexico and its aftermath. Why would I choose to take on the challenge of telling the story of the largest oil disaster in U.S. history, an event that killed 11 people, devastated wildlife, coated coastlines, sickened clean-up workers and brought local economies to a halt?

When I was fourteen, my mom drove my friend Tara and me to a Pixies/U2 concert in Baton Rouge. We’d waited months for this sold-out concert. I remember roaming the halls to gawk at all the other countercultural southerners … and finding a booth to sign up for Greenpeace and Amnesty International. At that age, I had no idea what “being political” meant, but helping political prisoners and the environment sounded exciting, so I signed up for both. So you could say art brought me to politics in both conscious and unconscious ways, and the two have been connected for me since.

Inevitably, after I screen The Great Invisible for an audience, someone fervently raises their hand and asks what they can do—what can anyone do—in the face of all this? To  see the connection between filling up your car and offshore drilling is overwhelming.

Perhaps it’s because oil has such a tight grip on us that we simply try not to think about it. It’s easier to grab a plastic water bottle when we’re thirsty, to book a flight when we want to see someone and to buy a car based on comfort rather than fuel economy. Hell, I do it too. So what do I say to that person who’s just watched my film and wants to know what they should do?

Here’s what I tell them:

As an artist, I want people to respond to my film as a film, and not a political screed. But I also hope my film will inspire viewers the way I was once inspired and spur conversations about our oil consumption, extreme oil extraction methods and their impacts on our planet, public health and our democracy.

Find The Great Invisible at a theater near you here.