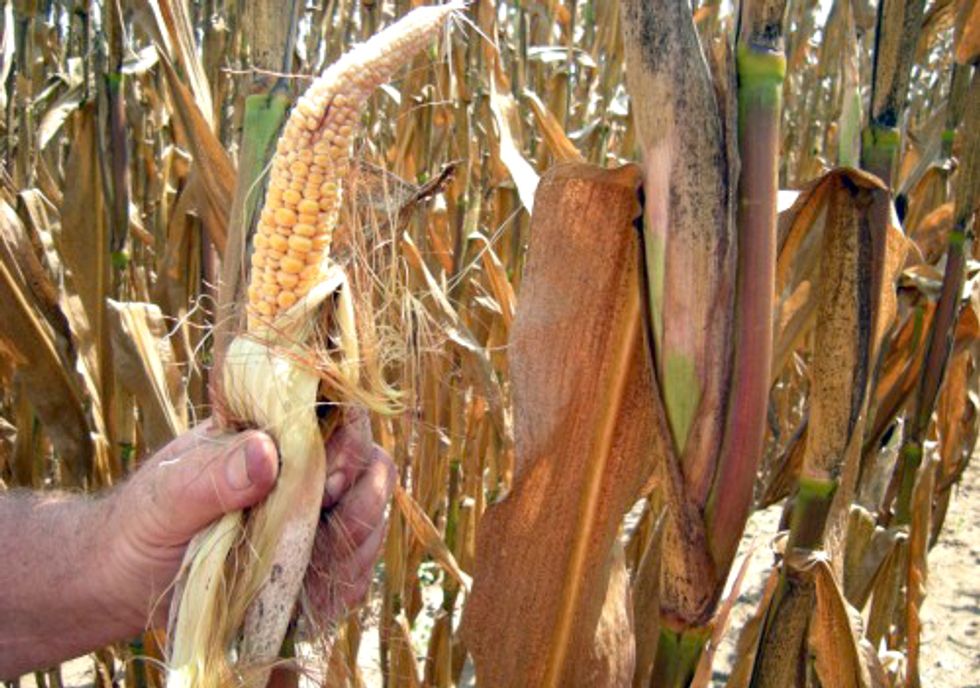 As the drought gripping the Midwest wreaks havoc on corn crops, resulting in dramatic drops in projected corn yields, federal policies that force large amounts of corn out of the food supply and into ethanol production are coming under increasing scrutiny—and for good reason.

The federal corn ethanol mandate—called the Renewable Fuel Standard (RFS)—exacerbates food insecurity and hunger in times of severe drought and other extremes that deplete corn supplies. Meanwhile, corn ethanol production degrades the environment and fails to provide a stable or sustainable alternative to oil. As more than half of all U.S. counties are declared disaster areas and corn prices continue to spike, Congress has a responsibility to rein in federal policies that support this risky and polluting fuel.

Mandates to use corn as fuel heighten rises in food prices

In 2012, the Renewable Fuel Standard mandates the use of 12.2 billion gallons of corn ethanol—forcing as much as 40 percent of the dwindling U.S. corn crop into ethanol production. Meanwhile, the worsening drought is beginning to impact corn prices—they’ve spiked upwards of 50 percent since June. When corn prices rise, so do the prices of products that rely on corn. The U.S. Department of Agriculture (USDA) predicts increases in domestic prices of beef, dairy products and eggs ranging from 3 to 5 percent through 2013. Globally, the U.S. is the largest exporter of corn. Rising food prices will hit people in developing countries that rely on imports of our grains most severely. Higher grain prices in the U.S. are already triggering global food price spikes that parallel those seen in the 2008 global food crisis.

By shrinking the supply of corn for our food system, the Renewable Fuel Standard will continue to push corn prices higher. After the global food crisis of 2008, the World Bank pinned expanded biofuels production as one of the single biggest factors in pushing up food prices. Institutions from the World Trade Organization to the National Academy of Sciences have similarly criticized ethanol expansion for contributing to food price volatility. Looking ahead, a July 2012 study by the New England Complex Systems Institute warned that the drought and record-high temperatures experienced this summer are “poised to trigger an imminent global food crisis” and recommended that lifting mandates to convert corn into ethanol could help avert it.

The drought underscores the inability of the corn ethanol industry to provide the U.S. with a safe, secure source of energy. Although we’re using almost half our corn for ethanol, biofuels only account for 10 percent of our transportation fuel and already place undue stress on our food system and environment. When corn yields fall like they have this year, the corn ethanol mandate prioritizes fuel over stable food prices and environmental sustainability. Several studies, including a recent one by the Na­tional Academy of Sciences, have found that the RFS—95 percent of which is currently met by corn ethanol—is increasing air pollution and greenhouse gas emissions, degrading water sources and damaging biodiversity.

The problems associated with using crops for fuel will likely intensify in the future. “Stronger, more intense and longer-lasting drought” will result from a warming climate, concludes Kevin Trenberth, a senior scientist at the National Center for Atmospheric Research. In the Midwest, scientists predict climate change will make persistent droughts more likely over the next 20 to 50 years. In the new normal of accelerating climate change, corn yields are likely to remain erratic. Research published in the journal Nature Climate Change by Noah Diffenbaugh, an assistant professor at Stanford University, found that the combination of climate change impacts and biofuels mandates present the most significant threat to corn price stability over the next few decades.

In the short term, the U.S. EPA needs to reduce the volumes of corn ethanol mandated by the Renewable Fuel Standard to ease the environmental and economic harm caused by corn ethanol production. On August 1, 156 U.S. House Representatives sent a letter to the U.S. EPA requesting a reduction of the RFS. In the longer term, Congress needs to seriously reform the RFS and reexamine all federal support for polluting biofuels that threaten the environment, food security and public health.