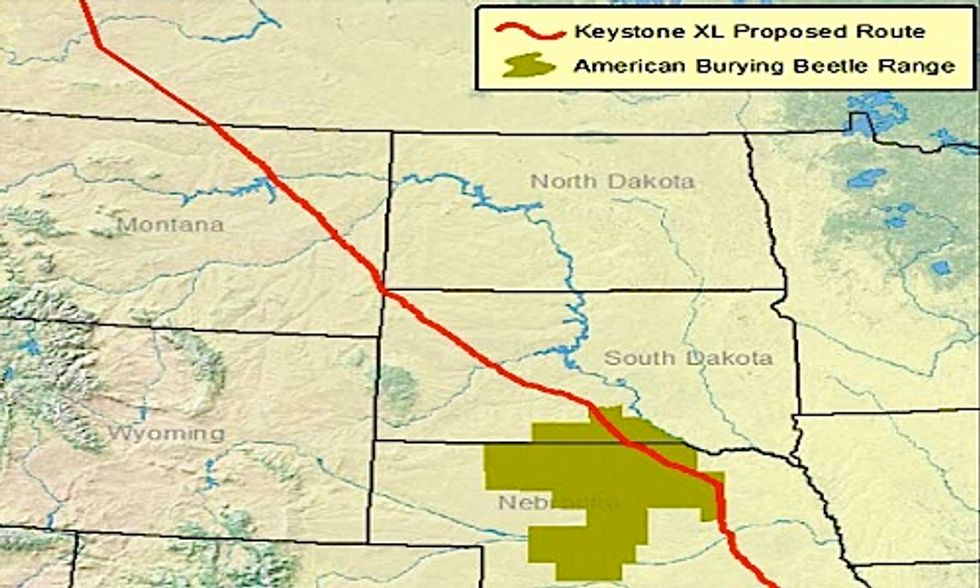 Managers within the U.S. Fish and Wildlife Service (FWS) overrode their scientific experts to adopt an inaccurate map based upon a flawed model that significantly shrank the range of an endangered species, according to agency investigative reports released today by Public Employees for Environmental Responsibility (PEER). The managers not only retaliated against scientists who voiced objections but rushed into publication of a bogus scientific journal article to cover their tracks.

The American burying beetle is an endangered species threatened by the Keystone XL tar sands pipeline.

The American burying beetle (ABB), a critically endangered species, has seen its range dwindle from 35 states to the plains of South Dakota, Arkansas, Nebraska and Oklahoma —areas in the proposed path for the $5.3 billion Keystone XL oil pipeline.

This is the first time an Interior agency has upheld a scientific misconduct complaint under its relatively new Scientific Integrity policies. Yet FWS refused to release the reports to PEER under the Freedom of Information Act. PEER obtained them by filing an appeal with Interior’s Office of Solicitor, the administrative step before a lawsuit, and the solicitor ordered release of redacted versions of the reports.

“As outrageous as the misconduct in this case was, it is not an isolated occurrence,” stated PEER Executive Director Jeff Ruch, noting that FWS is still withholding another, separate report of verified scientific misconduct but has been ordered to release it unless the Service can validate its previously unstated assertion that the report would reveal corporate trade secrets and confidential law enforcement techniques. “The leadership of the Service abets scientific subversion by keeping it hidden.”

The panels’ ABB findings were made in March and April of 2013. In July, Interior Inspector General Mary Kendall issued an extraordinary Management Advisory to Secretary Sally Jewel that FWS had yet to take “any formal and permanent action against the offending supervisors” but, to the contrary, “recent actions appear to have elevated their status.”

The two supervisors, Porter and Bell, were not formally removed from their positions but detailed to prestigious new assignments. Bell has since resigned to take a position in the oil and gas industry. Porter is expected to resign as soon as she can find another job. Meanwhile, the whistleblowing scientists had yet to receive any “relief,” according to the advisory.

“As it stands now, scientists who report scientific misconduct jeopardize their careers because the agency hierarchy stands by the violators,” Ruch added, pointing to numerous reports of how deeply politicized FWS science has become. “It appears pretty obvious that the scientific integrity problems in the Fish and Wildlife Service start with Director Dan Ashe.”