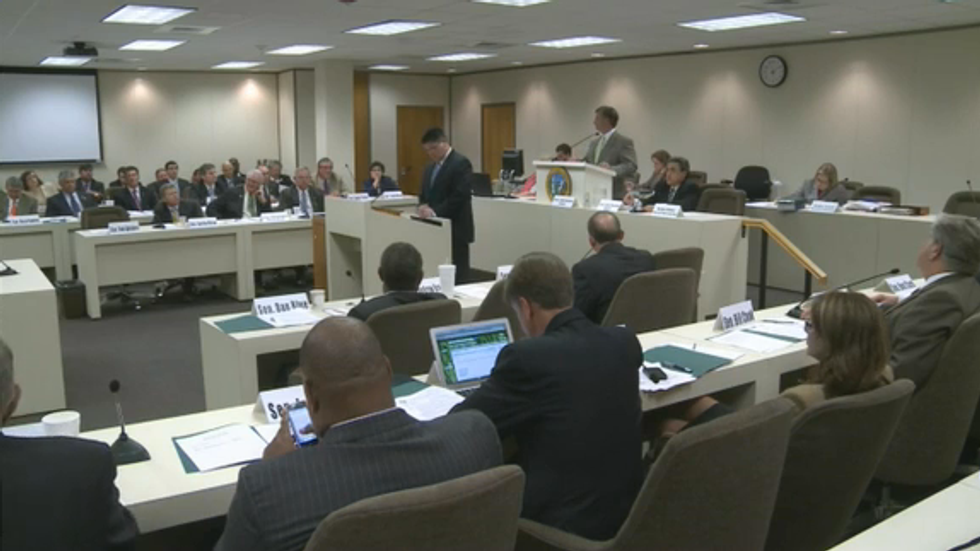 Bitter from a lack of support for his attacks on clean energy incentives, North Carolina Rep. Mike Hager is promising some new, dirty tricks to revive the effort. His colleagues in the NC Senate appear to be helping by advancing the Senate version of Rep. Hager’s bill yesterday through committee without counting the votes.

The bill was clearly a contentious one with a close “voice vote”—it’s impossible from listening to tell whether the yeas (anti-clean energy votes) or nays (pro-clean energy votes) were actually louder. Yet the Senate Finance committee co-chairman Bill Rabon talked over Senators requesting a hand vote and quickly adjourned the meeting. The Raleigh News & Observer writes:

Opponents of the bill loudly voted “No!” to show their frustration at the Republican chairman’s decision not to count individual votes. In what was clearly a razor-thin margin, both sides said they would have won if votes had been counted.

See the video below. Watch the last minute for the rushed conclusion and clear frustration among dissenting Senators.

Rep. Mike Hager is a former engineer at coal-burning utility Duke Energy—the largest utility in the country and one of the biggest carbon polluters in the world—and a member of the contentious American Legislative Exchange Council (ALEC), which created the model bill that became Rep. Hager’s attack on renewable energy on the dime of companies like Duke, Exxon, Koch Industries and Peabody Energy.

Rep. Hager’s own House Utilities Committee recently slapped down his anti-clean energy bill by 18-13, but Rep. Hager says he’s going to keep reintroducing H298, which would freeze or repeal North Carolina’s renewable portfolio standard (RPS). Hager says he hopes his colleagues opposing the renewable energy rollbacks “miss the meeting” when he reintroduces it.

This existing RPS law requires utilities in North Carolina, a market essentially monopolized by Duke Energy, will increase generation of electricity from renewable sources to 12.5 percent by 2020. According to Duke Energy, the company plans on generating only 3 percent of its electricity from renewable sources by 2032, so bankrolling organizations like ALEC that kill clean energy incentives works fine for Duke.

Duke Energy aside, a legion of national interests financed by the billionaire Koch brothers and multimillionaire Art Pope have flooded North Carolina with misinformation on clean energy and provided support to Rep. Hager’s ALEC bill. Most of these groups–like Americans for Prosperity, Americans for Tax Reform, Heartland Institute and John Locke Foundation–are coordinated through an umbrella of corporate front groups known as the State Policy Network.

ALEC and the State Policy Network groups have made killing clean energy incentives a national priority this year; after failing in Kansas, facing delays in Ohio and having a rough start in North Carolina, they’re hungry for a trophy to show to the fossil fuel interests that fund their dirty work. And they’re willing to resort to dirty tricks to reach their goals, like skipping that part where you count lawmakers’ votes.