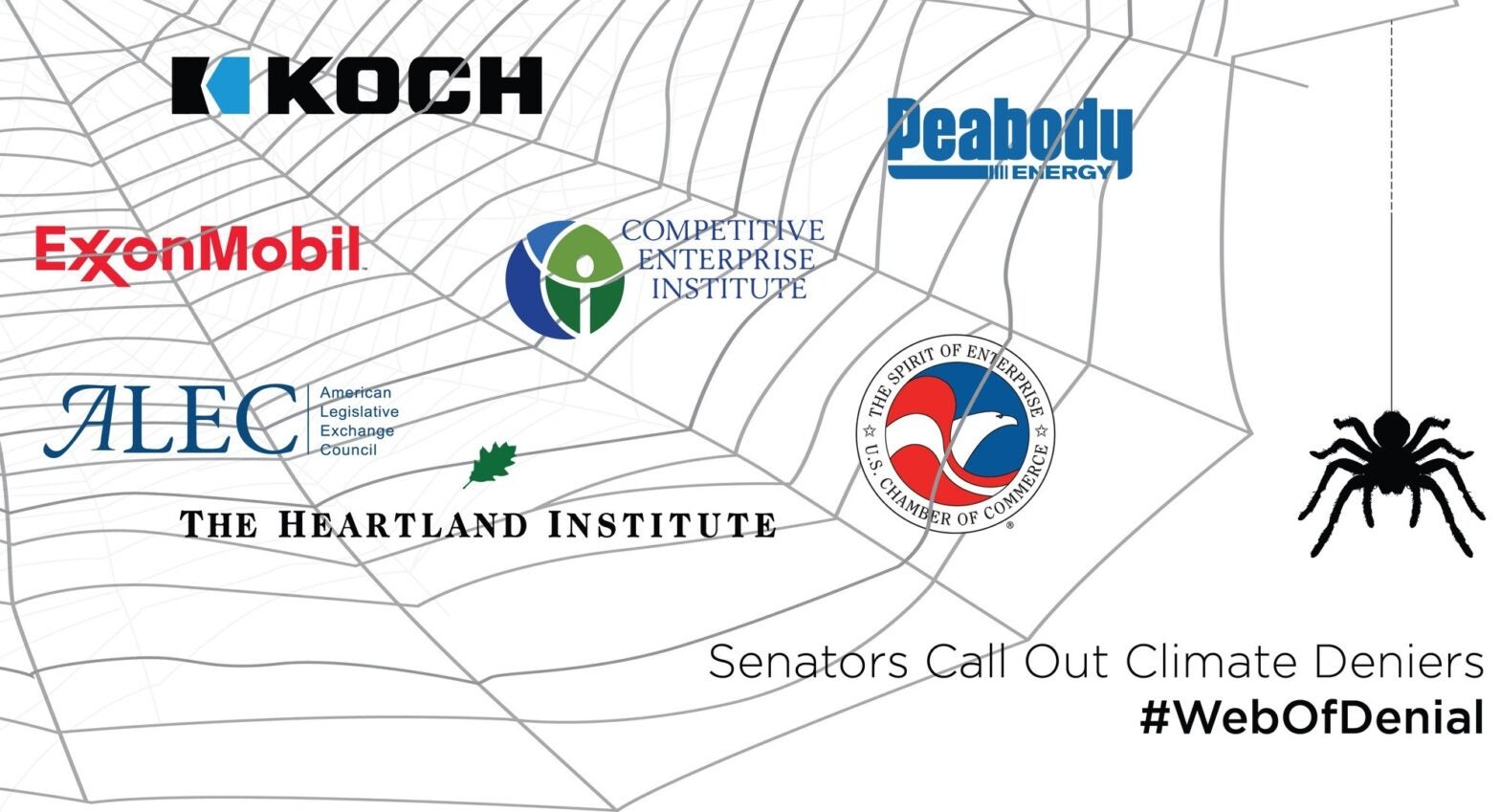 Nineteen U.S. Senators who understand the need to clear the PR pollution that continues to block overdue climate policy spoke out on the Senate floor Monday in support of the Senate Web of Denial Resolution calling out the destructive forces of fossil fuel industry-funded climate denial. 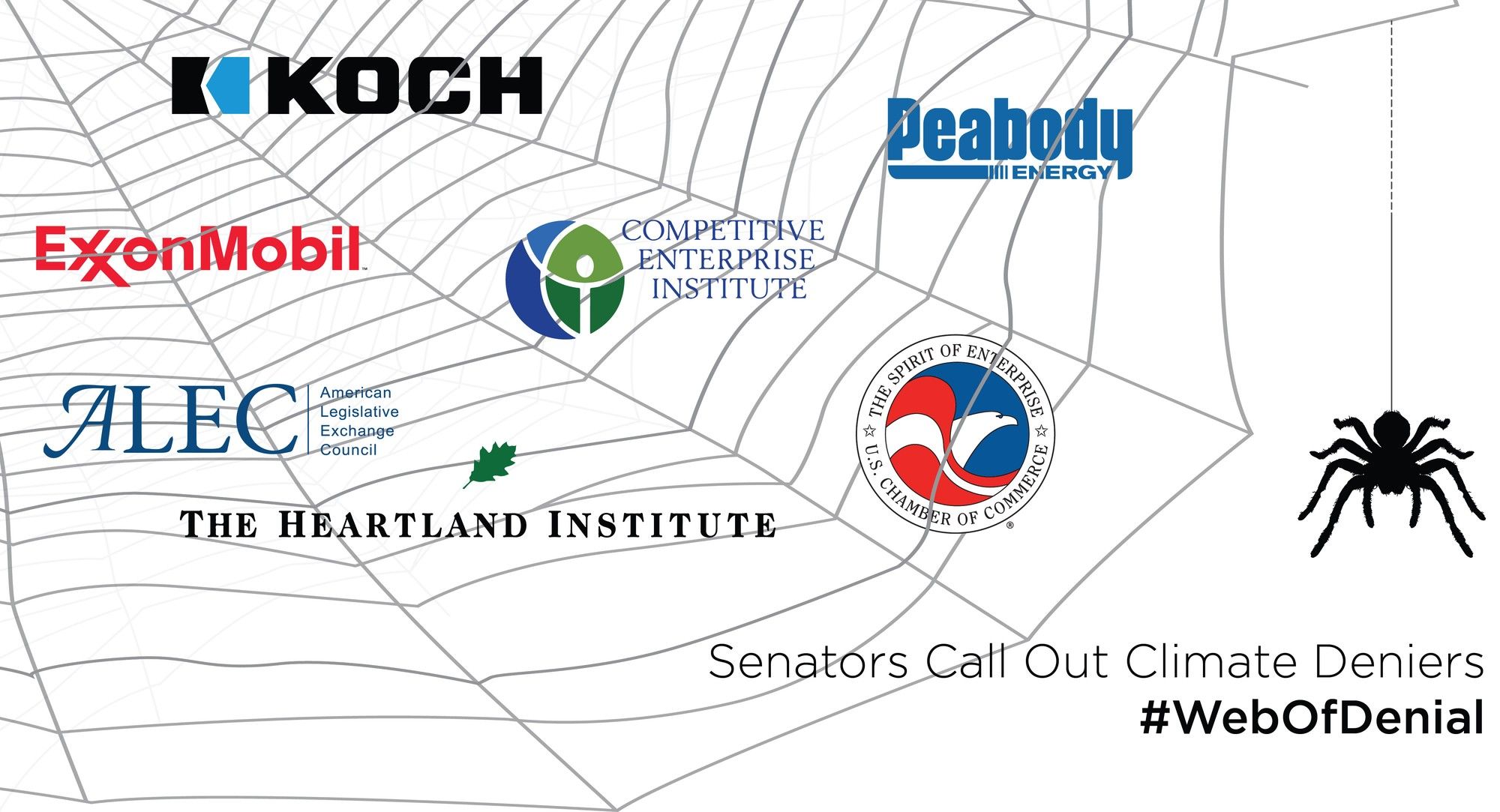 Championed by Senators Whitehouse, Markey, Schatz, Boxer, Merkley, Warren, Sanders and Franken, the resolution condemns what they are calling the #WebOfDenial—”interconnected groups—funded by the Koch brothers, major fossil fuel companies like ExxonMobil and Peabody Coal, identity-scrubbing groups like Donors Trust and Donors Capital and their allies—developed and executed a massive campaign to deceive the public about climate change to halt climate action and protect their bottom lines.”

Joined in the House of Representatives by Congressman Ted Lieu (D- CA), these champions for climate action and accountability in the Senate are calling out the use of think tanks and denier-for-hire front groups to create doubt about climate science.

According to a press release issued Monday morning, the resolution condemns the “efforts of corporations and groups to mislead the public about the harmful effects of tobacco, lead and climate. The resolution also urges fossil fuel corporations and their allies to cooperate with investigations into their climate-related activities.”

As DeSmog Blog, ExxonSecrets, Climate Investigations Center and others have documented repeatedly over the past decade, the oil and coal industries and their friends have spent hundreds of millions of dollars on an immoral and potentially fraudulent campaign to deceive the public about the scientific consensus on manmade global warming and the need for urgent action to curtail fossil fuel pollution.

Just last week, DeSmog Blog published the latest round of Exxon’s funding of climate denial groups still peddling doubt, bringing the total known funding from Exxon to nearly $34 million over two decades. Add to that the nearly $90 million pumped into the denial machine by the Koch Family Foundations, as well as the largesse emanating from the dark money ATM, Donors Trust and Donors Capital Fund.

Champions in the U.S. Congress are now putting the denial machine on notice with this resolution and a series of speeches that took place last night from 4:45 -6:45 p.m. EDT, and will also take place today from 5 – 7:30 p.m. EDT on the Senate floor.

Here are updates to this post from the speeches last night:

7:35pm EDT: Sen. Sheldon Whitehouse spoke last tonight and highlighted many of the points made by his colleagues throughout the day during the #WebOfDenial speeches. Whitehouse praised the peer-reviewed research into climate denial by Robert Brulle, Justin Farrell, Riley Dunlap, Aaron McCright, Constantine Boussalis and Travis Coan.

He thanked the many authors of books about climate denial, including Naomi Oreskes and Erik Conway and noted that the film version of their book Merchants of Doubt is showing tonight on the Hill.

And Sen. Whitehouse called out many groups and outlets that have worked to expose climate denial and industry misinformation, including Greenpeace’s ExxonSecrets and PolluterWatch, set up by Kert Davies who has gone on to found the Climate Investigations Center, also named. He thanked the journalists at Inside Climate News and their must-read “The Road Not Taken” series. He thanked David Brock’s group American Bridge and Climate Nexus for its work to expose the Wall Street Journal’s peddling climate denial on its editorial page (and the Partnership for Responsible Growth for correcting the record in the Wall Street Journal). He thanked ProPublica, the Union of Concerned Scientists and more.

He highlighted author Jeff Nesbit and his new book Poisoned Tea, Jane Mayer and her book Dark Money, Steve Coll and his book Private Empire on ExxonMobil as well as his role as Dean at the Columbia School of Journalism.

Sen. Whitehouse also heaped much-appreciated praise on us at DeSmogBlog, mentioning our Time Magazine “Best Blogs” accolades as well as highlighting our news coverage and our Disinformation Database. (In turn, we thank the Senator for his leadership on this issue and his colleagues for speaking about the subject of climate denial which we’ve focused on for the past decade.)

“The scholarship of all these academics, all these organizations and all these authors—the detectives who are exposing the web of denial—have shined a bright light into its dark corners and illuminated its concerted effort to dupe the American public and sabotage climate action in America, all to protect the fossil fuel industry that funds it. It’s sickening, but it’s big. The denial web is designed to be big and sophisticated enough that when you see its many parts, you’re fooled into thinking it’s not the same beast. But it is. Like the mythological Hydra, many heads, same beast. …
Welcome to the Web of Denial. And thank you to those who are working to expose it. It is a filthy thing in our democracy.”

7pm EDT: Sen. Jeff Merkley (D-OR) spoke about the overlap of tobacco industry attacks on science and the “fossil industrial complex” that has similarly attacked climate science to evade accountability. He also discussed the Heritage Foundation, Art Pope, Cato Institute and the forged letter scandal orchestrated by Bonner and Associates for the Hawthorn Group and its coal industry client ACCCE. Merkley highlighted the work of Justin Farrell from Yale and the money flows from Donors Trust and the Koch Brothers. “A powerful, moneyed interest has spun a web of deceit. We know that these groups are backed by special interests. All we have to do is follow the money,” Merkley said.

He mentioned the more than $30 million from ExxonMobil and the denial funding from Peabody Energy revealed in its bankruptcy fillings. Merkley saved special mention for the Koch Brothers: “But as much as the fossil fuel companies have contributed to these efforts over the years, the titles of the mastermind and the kingpins of climate science denial—those titles rest with Charles and David Koch.”

6:25pm EDT: Sen. Charles Schumer (D-NY) spoke about the Mercatus Center, which he said “should be called the Koch Center” due to its massive Koch funding. He discussed the connections to the tobacco industry’s attacks on tobacco science and the overlap with the Koch-funded Mercatus Center.

5:55pm EDT: Sen. Tim Kaine (D-VA) spoke about the Virginia Institute for Public Policy and the CO2 Coalition and theCornwall Alliance for the Stewarship of Creation and mentioned DeSmogBlog’s research in his #WebOfDenial speech. He also talked about the funding from Donors Capital Fund and Donors Trust to denier organizations.

5:40pm EDT: Sen. Elizabeth Warren spoke about the Science and Public Policy Institute (SPPI), Willie Soon and Christopher Monckton‘s Hitler Youth outrage and claims to have a cure for AIDS and other “completely made up” Monckton-isms.

5:25pm EDT: Sen. Sheldon Whitehouse spoke about the #WebOfDenial and the $700 billion in global subsidies to the fossil fuel industry, annually. He highlighted the work of Drexel University professor Robert Brulle to expose the climate change counter movement and what the Senators are calling the climate #WebOfDenial. 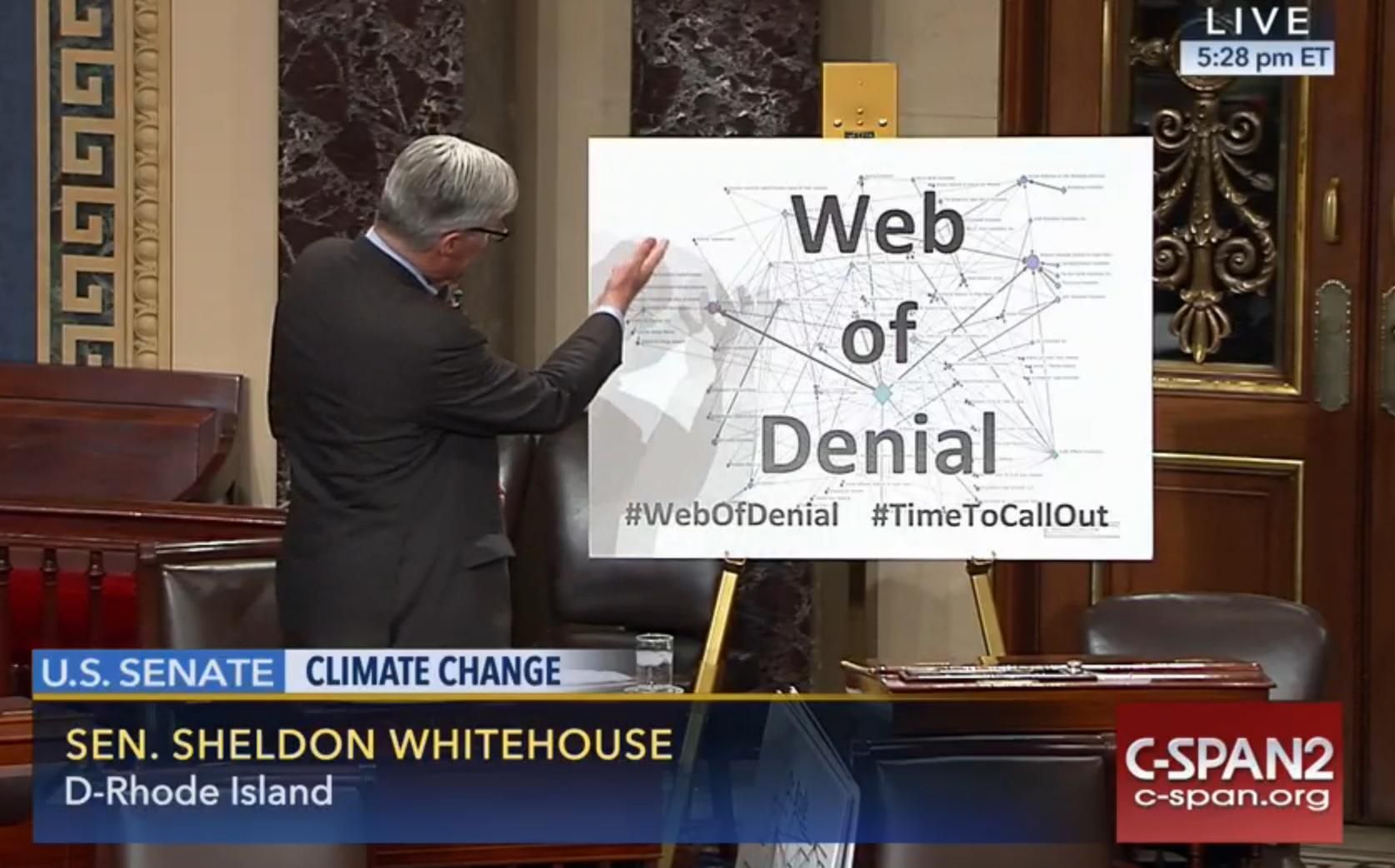 5:15pm EDT: Sen. Tom Udall spoke about the front groups Greening Earth Society and the Information Council on the Environment (ICE) and the web of denial.

5pm EDT: Sen. Cardin spoke about the attacks on climate science by the defunct group Annapolis Center for Science-Based Public Policy which received funding from ExxonMobil and the tobacco industry. He was introduced by Sen. Sheldon Whitehouse, who was thanked for leading this effort. Whitehouse delivered his 144th statement on the need for climate action and discussed the influence of the web of denial blocking action.

Update 4:30pm EDT: Senator Reid kicked off the action on #WebOfDenial, railing against the Koch Brothers and Exxon for dishing out millions to fund climate denial organizations. Reid named Heartland Institute, Cato Institute and Americans For Prosperity, among others. You can watch the action on C-SPAN2.

“It’s inspiring to see Senators join the movement to hold the likes of Exxon accountable for their decades of deception,” Jamie Henn, 350.org communications director, said. “Big Oil robbed us of a generation’s worth of climate action and to this day are still sowing doubt and misinformation — prioritizing profit at the expense of our climate and communities. The last 14 consecutive months have been the hottest on record, making it ever more pressing for our elected officials to bring this extensive web of climate denial to light.”

Last week, Sen. Sheldon Whitehouse delivered his 143rd speech about climate change and focused on the issue of climate denial and the front groups involved in peddling doubt. Watch here: