Senator Reid: It's Time to Stop Acting Like Climate Change Deniers Have a Valid Point Of View 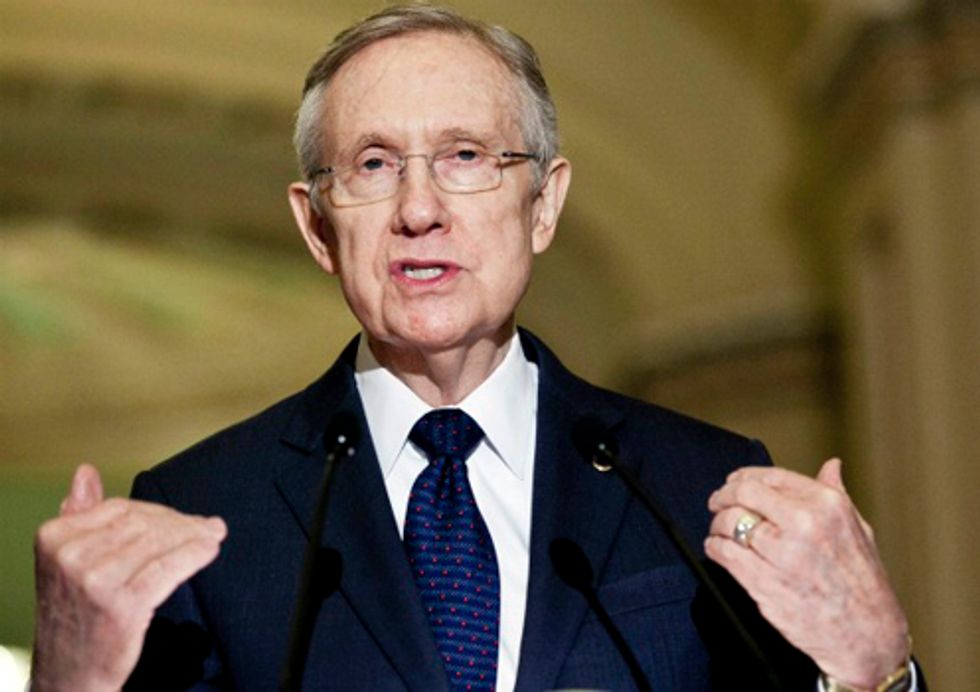 Senate Majority Leader Harry Reid (D-NV) spoke today at the National Clean Energy Summit 5.0: The Power of Choice. Below are his remarks as prepared for delivery:

Good morning, and welcome to the National Clean Energy Summit: The Power of Choice. I am pleased to once again host this important event with the support of the Center for American Progress, the Clean Energy Project, the MGM Resorts International and the UNLV.

Over the last four years, this summit has brought together investors, innovators, academics and policy makers dedicated to moving the clean energy industry forward.

We've already seen how incentives, funding and public-private partnerships have spurred job creation and innovation in this critical sector. This has been a ray of sunshine during the Great Recession.

It is easy to see the logic, the urgency and the opportunity of a clean energy revolution. That is why President Obama has fought hard to advance the policies that will reduce our reliance on oil and other fossil fuels, increase our production of clean energy and create good-paying jobs that can never be outsourced.

But his administration has waged an up-hill battle against moneyed special interests and their allies in Congress, who are invested in maintaining their sweetheart relationship with coal and oil companies.

As hard as it is to comprehend, there are still members of Congress resisting clean energy's American success story. And sadly they're doing their best to send clean energy industries and jobs overseas, and hindering the revolution in the process.

Twenty-five years ago, President George H.W. Bush promised to use the “White House effect” to combat the “greenhouse effect.” Yet a quarter century later, too many elected officials in Washington are still calling climate change a liberal hoax. They falsely claim scientists are still debating whether carbon pollution is warming the planet.

Of course, if those skeptics had taken a stroll along the Potomac River on a 70-degree day this February, they would have seen cherry trees blossoming earlier than at any time since they were planted 100 years ago. Washington experienced its warmest spring since record keeping began in 1895.

And back in the skeptics' home states, the harbingers of a changing climate are just as clear as those delicate February blossoms—and infinitely more perilous.

This year alone, the United States has seen unparalleled extreme weather events—events scientists say are exactly what is expected as the earth's climate changes.

Now ravaging wildfires have replaced the dust storms of the 1930's. Devastating fires have swept New Mexico, Idaho, Colorado, Nevada and other parts of the Mountain West, destroying hundreds of homes and burning millions of trees. These fires are fed in part by vast areas of dead forest ravaged by beetles and other pests that now survive through warmer winters.

On the East Coast, extreme thunderstorms and high winds called “derechos”—literally meaning straight-line storms—have eliminated power for 4.3 million customers in 10 states in the mid-Atlantic region. One 38-year veteran of the utility industry told the New York Times this: “We've got the 'storm of the century' every year now.” At the height of this storm—while the power was out and the air conditioning wasn't working—the East Coast experienced record high temperatures.

Down south, the Mississippi River is nearly dry in various places, with shipping barges operating in only 5 feet of water. Just Friday, barges were grounded because the water level was so low. And New Orleans' water supply is now being threatened by salt water moving up the Mississippi due to extremely low water.

But while record drought has struck many parts of the United States, torrential rains have poured down in others. In June, the fourth tropical storm of the hurricane season—a season which typically begins in the fall—dropped 20 inches of rain on Florida.

And that's just in the United States—just through the month of July.

Arctic sea ice is also at its lowest point in recorded history.

This month, the massive ice sheet atop Greenland experienced sudden and almost uniform melting—a phenomenon not seen in the modern age.

This spring, rain fell unexpectedly in Mecca despite 109-degree temperatures. It was the hottest downpour in the planet's recorded history.

And last week more than 600 million people in India were without power. Late monsoons and record temperatures increased demand for electricity to irrigate crops and air condition homes, overloading the fragile power grid and causing the blackout.

Scientists say this is genesis—the beginning. The more extreme climate change gets, the more extreme the weather will get. In the words of one respected climate scientist: “This is what global warming looks like.”

Dozens of new reports from scientists around the globe link extreme weather to climate change. Not every flood or drought can be attributed to human-induced transformation of our planet's weather patterns. But scientists report that these extreme events are dozens of times more likely because of those changes.

The seriousness of this problem is not lost on your average American. A large majority of people finally believe climate change is real, and that it is the cause of extreme weather. Yet despite having overwhelming evidence and public opinion on our side, deniers still exist, fueled and funded by dirty energy profits.

It's time for us all—whether we're leaders in Washington, members of the media, scientists, academics, environmentalists or utility industry executives—to stop acting like those who ignore the crisis or deny it exists entirely have a valid point of view. They don't.

Virtually every respected, independent scientist in the world agrees the problem is real, and the time to act is now. Not tomorrow. Not a week from now. Not next month or next year. We must act today.

As Americans, we have the power to choose the kind of world in which we live. Every decision we make—large and small—matters. Some choices are as simple as turning off the light when you leave the room. Others are more ambitious—such as committing the Department of Defense, the largest energy consumer in the world, to transition to clean, renewable energy.

But every choice has benefits—or consequences.

About 50 miles north of Las Vegas, the Reid-Gardner coal-fired power plant is nestled in the pastoral Moapa Valley. Since it began operating during the Johnson Administration, Reid Gardner has burned tens of millions of tons of coal.

Each year for the last 47 years, more than 2.8 million tons of climate-changing carbon dioxide—not to mention thousands of pounds of toxins such as arsenic, mercury and lead—go up the plant's four giant smokestacks.

About two football fields away from those smoke stacks lives a band of 300 Moapa Paiute Indians. Every day Reid-Gardner rains down on the dwindling Native American tribe fine particulates and coal ash filled with chemicals that cause cancer, emphysema and heart problems.

The soot—and the dangerous chemicals inside it—is literally killing the Pauites.

It's no secret coal plants kill. Each year, more than 24,000 deaths are attributed to emissions from coal-fired power plants in the United States alone.

That's why it is time to close the dirty relic, Reid-Gardner.

Just imagine living two football fields from thousands of tons of poisons, ever present, always spewing their toxins on your home.

Every year we spend hundreds of millions of dollars buying coal from other states to burn in Nevada. It's time to make a different choice—a choice that brings new clean energy industries and jobs to Nevada. A choice to invest in our own natural resources.

The more dirty coal we use, the higher the price of coal gets. The more solar power we use, the cheaper it gets. Shutting down this one coal-fired power plant won't save the planet all at once—but it would save an Indian homeland.

A famous maxim says “a journey of a thousand miles begins with a single step.” For consumers, that step might be deciding to buy energy-efficient light bulbs, drive a next-generation vehicle or turn off the lights when you leave the room. For NV Energy, the first step should be deciding to turn out the lights on Reid-Gardner—and turn them out forever.

Our guests and speakers today will outline some of the other decisions that lie ahead.

Today my friend, Interior Secretary Ken Salazar, will tell you what the federal government has already done to accelerate development of renewable energy offshore and on public lands.

The job-creation power of clean technology is on display in Nevada, where more than a dozen renewable energy facilities have been constructed on public lands.

This week Pattern Energy will dedicate the 150 megawatt Spring Valley Wind project. It is the first commercial wind project in Nevada, also located on federal land in White Pine County.

And dozens of geothermal wells on public lands power the cities of Reno and Sparks, in Northern Nevada.

Today you'll also hear from utility and renewable energy industry executives, scientists, educators and lawmakers about the combination of policies and incentives the government and the private sector can use to create jobs and expand clean technologies.

You'll hear from innovators with solutions to reduce our energy needs and meet our electricity demand without climate-changing fuels. They are helping to bring new technologies and products to market that give consumers more and better choices, and help them save money on their energy bills.

And you'll hear from President Bill Clinton—on the challenge—and the choice—facing every American—and facing our nation: how to grow our economy—and save the planet—at the same time.

After all, the technology to change course is not futuristic. It's available and affordable today. All we have to do is decide to use it.

The power of choice is in our hands. I urge you to choose the clean, safe and reliable path with me. Our future depends on it.

And now it's my honor to introduce a man who has always been a leader on clean energy issues. As a farmer and an environmental lawyer, Ken Salazar understands as well as anyone the challenges of climate change, and what it will take to address them. As a Senator, Ken had a vision to build an economy that relied on clean, renewable energy. And as Secretary of the Interior, Ken has led the effort to increase development of renewable resources on federal land. It is my pleasure to introduce my friend, Interior Secretary Ken Salazar.