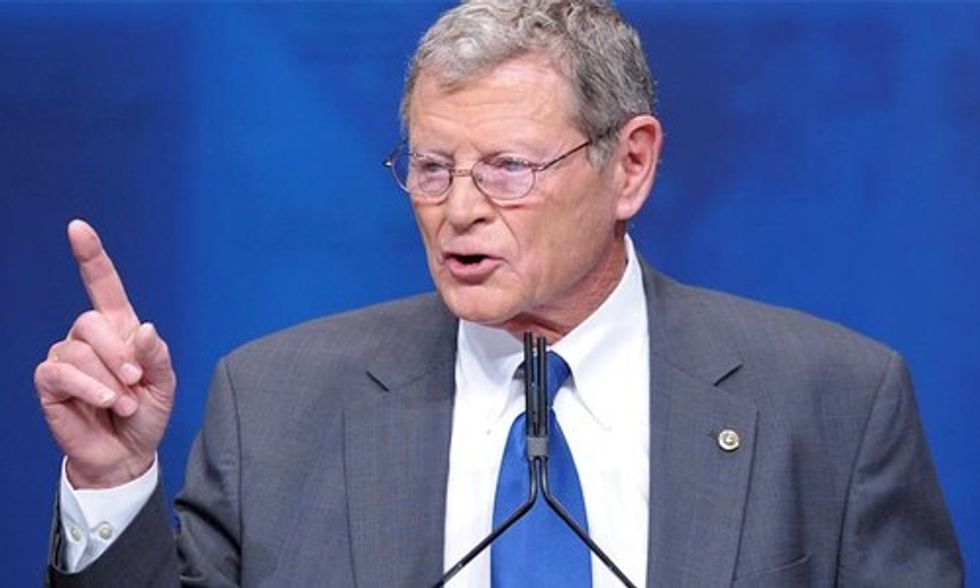 The world of climate denial has converged on the Washington Court Hotel in Washington DC this week as the rightwing Heartland Institute's 10th annual Climate Conference fills its ballrooms with a parade of denial notables intent on proving that climate change isn't occurring.

Senator James Inhofe on climate change this morning: "God is still up there." What?! http://t.co/Mnta3v8oLX @rebleber pic.twitter.com/KtLSSdcQKc

They include discredited fossil fuel-funded scientist Willie Soon; Marc Morano, executive editor of the denial website ClimateDepot.com and one of the main subjects of the documentary Merchants of Doubt; and two congressmen, including the infamous, snowball-throwing chairman of the Senate Environment Committee, James Inhofe. When you've got the author of The Solar Fraud: Why Solar Energy Won't Run the World and Bass Ackwards: How Climate Alarmists Confuse Cause With Effect (those are written by retired University of Connecticut physics professor Howard Hayden) and another speaker whose touted as "a popular guest of America's number one radio show, the Rush Limbaugh Show," it's pretty clear what direction the event is going to take.

And according to The Guardian of London, "Lamar Smith, the Texas congressman who heads the science, space and technology committee, raised cheers from the room when he said he proposed a 40 percent cut in NASA’s budget for Earth sciences last week." So the crowd clearly heard what they came for.

Inhofe opened the conference with a keynote address flogging the same narrative he's been putting out there since the 2012 publication of his book The Greatest Hoax: How the Global Warming Conspiracy Threatens Your Future, passing out sheets with 12 talking points for those intent on refuting the evidence of climate change.

He dismissed the upcoming Paris climate summit as nothing  but a bunch of talk, saying, "They talked about it—very good. Now they say it is all going to come together in Paris, and I don’t think it is.” And he assured his audience that the Republican Party will stand firm with them on climate change, saying, "If you look at Republican candidates, they are all denying this stuff with the exception of Lindsey Graham. They're all with the people in this room."

He also took potshots at Pope Francis, who has spoken out repeatedly on climate change and is expected to deliver his long-awaited encyclical on the topic next week.

"Everyone is going to ride the Pope now. Isn’t that wonderful,” said Inhofe sarcastically. “The Pope ought to stay with his job, and we’ll stay with ours.”

"I am not going to talk about the Pope," he said, immediately after doing so. "Let him run his shop, and we’ll run ours.”

Never mind that Inhofe's "shop" is fueled by millions from the oil and gas industry, he's already trespassed on the Pope's "shop" to make his hoax argument. In 2012, he appeared on a Christian radio program where he said, "The Genesis 8:22 that I use in there is that ‘as long as the earth remains there will be seed time and harvest, cold and heat, winter and summer, day and night.’ My point is, God’s still up there. The arrogance of people to think that we, human beings, would be able to change what He is doing in the climate is to me outrageous." He repeated the "God is still up there" line in his speech at the Climate Conference.

Inhofe also warned his audiences against "appeasers," Republicans tempted by the money spent by people such as Republican businessman Jay Faison, who has committed $175 million to encourage them to address climate change as a reality.

"When they see how much money is there, and they see that the bureaucracy is on their side, they might be tempted to give them a vote,” said Inhofe. “This is why you have this last guy with $175 million claiming to be a Republican, and all it takes is one or two or three of the senators to say, maybe I’ll appease them.”

Not only was Inhofe honored with the opening keynote slot, he was also one of five individuals given awards by the Heartland Institute for "decades fighting the politicization and misinterpretation of climate science." He joined three scientists—only one a climatologist—and a TV weatherman in receiving the honor.

"The Climate Change Awards were started in 2014 as a way to recognize individuals of extraordinary ability and unflagging commitment to restoring sound science and common sense to the debate over global warming," according to the Heartland Institute. "The awards serve to increase public awareness of the global warming realism movement and send a signal to the academy and other elite institutions saying if they won’t recognize these genuine heroes, then the sponsors of these awards will. And finally, they encourage otherwise silent scientists, philanthropists, and civic and business leaders to speak up on behalf of sound science and common sense."

Listen to Sen. Inhofe and other climate deniers speak at the Heartland Institute's Climate Conference: