Senator Inhofe to Climate Deniers: 'You're Doing the Lord's Work' 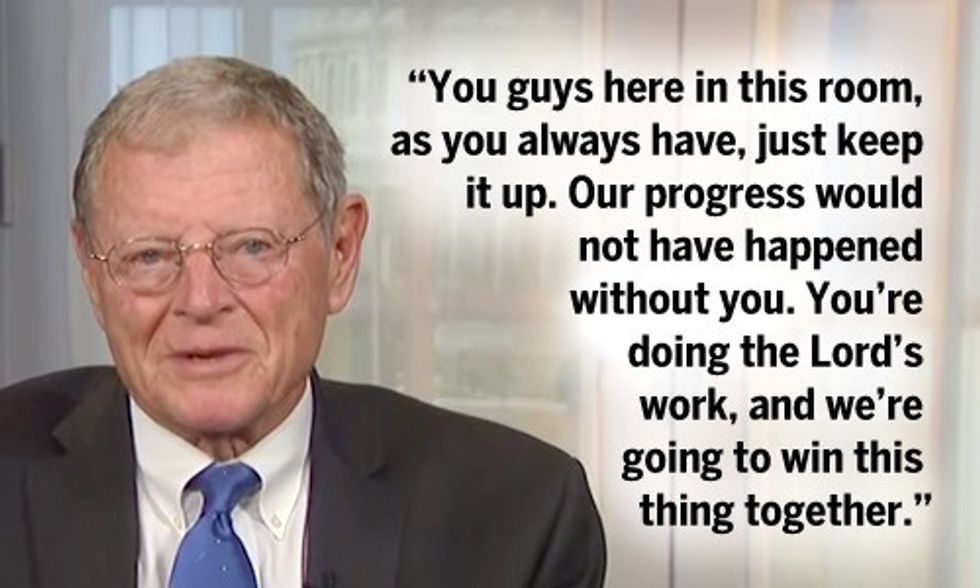 Looks like Sen. James Inhofe (R-OK) won't be crashing the Paris climate talks after all. He did, however, provide taped remarks at an unofficial side event yesterday at COP21. The Senate's climate denier in chief told the room full of deniers they were "doing the Lord's work." Inhofe, who serves as the chairman of the Senate Environment and Public Works Committee, famously brought a snowball onto the floor of the Senate last winter in an effort to prove that climate change was a "hoax."

“As COP21 continues this week, I look forward to hearing what kind of cover-up deal emerges from this international climate conference,” Inhofe told the group. “And you guys here in this room, as you always have, just keep it up. Our progress would not have happened without you. You’re doing the Lord’s work and we’re going to win this thing together.”

The event was put on by a handful of leading denier groups, including Committee for a Constructive Tomorrow, Competitive Enterprise Institute and The Heartland Institute.

The Heartland Institute hosted the 10th annual International Conference on Climate Change this past summer. The annual conference is the world's largest climate denial conference, and Inhofe was one of the keynote speakers this year. In his speech, the Oklahoma senator, author of The Greatest Hoax: How The Global Warming Conspiracy Threatens Your Future, criticized Pope Francis for speaking out about climate change.