‘It’s Not Going to Get Turned Around in 10 Years’: Sen. Feinstein Criticized for Dismissive Attitude to Young Climate Activists 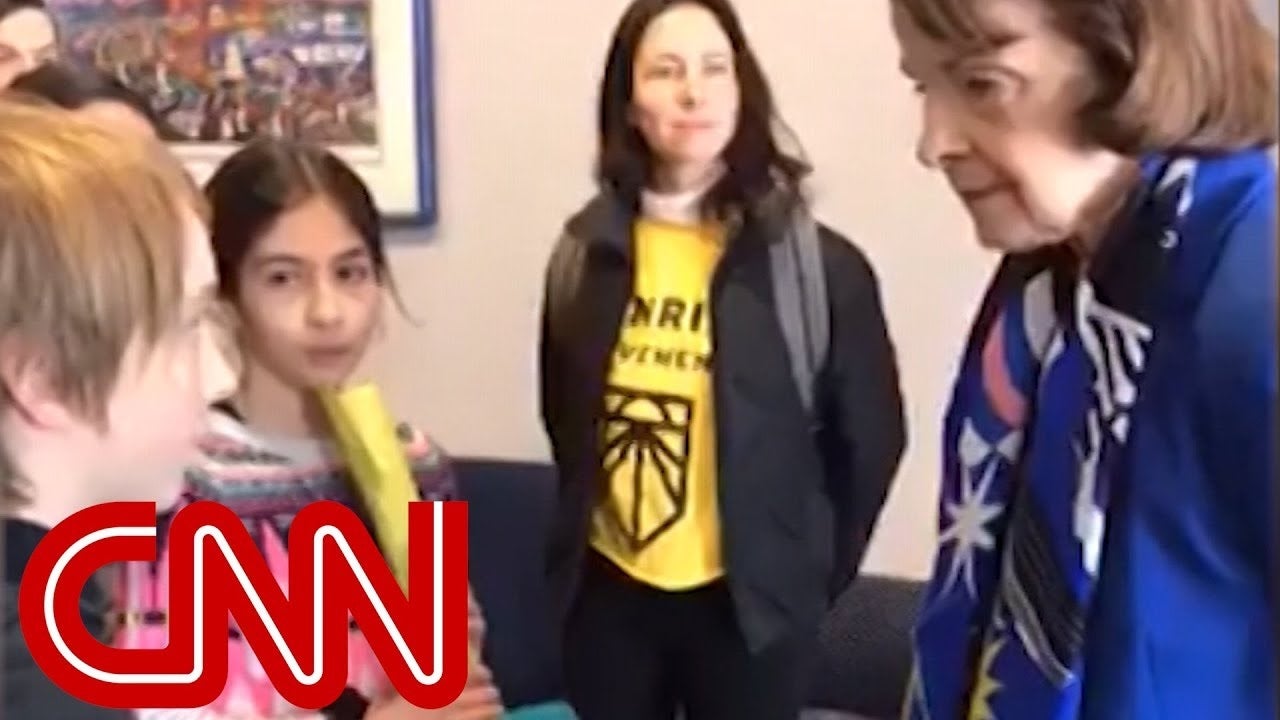 An encounter between 15 San Francisco middle and high school students and California Senator Dianne Feinstein on Friday revealed a generational divide within the Democratic party when it comes to acting on climate change.

The children arrived to ask Feinstein to support the Green New Deal resolution proposed by Democratic New York Representative Alexandria Ocasio-Cortez and Democratic Massachusetts Senator Edward J. Markey, which calls for a 10-year plan to shift the U.S. away from fossil fuels and towards 100 percent renewable energy while providing green jobs. They were met with a refusal that the Sunrise Movement Bay Area called “condescending” in a Facebook post sharing the video.

“That resolution will not pass the Senate, and you can take that back to whoever sent you here and tell them,” Feinstein said at one point, The New York Times reported. “I’ve been in the Senate for over a quarter of a century and I know what can pass and I know what can’t pass.”

You can watch the full video here:

Feinstein countered the children’s request by sharing a draft of an alternative proposal that she told them was both more affordable and more likely to pass the Senate. However, environmentalist critics like 350.org founder Bill McKibben pointed out that Feinstein’s proposal—which calls for zero carbon emissions by 2050—simply does not move fast enough for scientific reality. He explained in The New Yorker:

The irony is that, when Feinstein said she’s been “doing this for thirty years,” she described the precise time period during which we could have acted. James Hansen brought the climate question to widespread attention with his congressional testimony in 1988. If we’d moved thirty years ago, moderate steps of the kind that Feinstein proposes would have been enough to change our trajectory. But that didn’t get done, in large part because oil and gas companies that have successfully gamed our political system didn’t want it to get done. And the legislators didn’t do anywhere near enough to fight them.

The video revealed this tension between political and physical reality. One of the children referenced the most recent Intergovernmental Panel on Climate Change (IPCC) report that says greenhouse gas emissions must rapidly fall within 12 years in order for warming to stay at 1.5 degrees Celsius above pre-industrial levels.

“Some scientists have said that we have 12 years to turn this around,” the child said.

“Well, it’s not going to get turned around in 10 years,” Feinstein responded.

The video also exemplifies a rift between more seasoned legislatures who are used to how Washington works and younger Americans who are afraid for what climate change could mean for their futures.

“The divide in today’s Democratic party is not left vs center/left, it is generational,” Brian Fallon, a former aide to top Democrats Eric Holder, Hillary Clinton and Chuck Schumer, said in a Tweet quoted by The New York Times.

The divide in today's Democratic party is not left vs center/left, it is generational.https://t.co/vvcKoHcH1K

Some commentators criticized the targeting of Feinstein, who is still working on the issue. when Republicans including President Donald Trump engage in out right climate denial. They also questioned whether the children were acting entirely on their own behalf.

“[W]hy didn’t they go after someone who’s against climate change?” NBC News Chief Foreign Affairs Correspondent Andrea Mitchell asked on Meet the Press Sunday. “She has legislation. She’s saying, ‘I don’t want to sign on to the Green New Deal because it’s aspirational. It’s not legislation. I’m working on something that’s real.’ Also, who are the adults who bring their kids who don’t understand this stuff?”

The children featured in the video have pushed back against the idea that their actions were directed by adults.

“We are the young people in this video. We have heard claims that we are being used as props or prepped by the adults in the room,” they wrote on their Twitter account Youth Vs. Apocalypse. “That’s just not true. We write our own petitions, deliver our own speeches, and organize our own events. It’s our future at stake.”

We are the young people in this video. We have heard claims that we are being used as props or prepped by the adults in the room.

That's just not true. We write our own petitions, deliver our own speeches, and organize our own events. It's our future at stake.#ListenToUs https://t.co/7aEd5KluXY

UPDATE: 39 young people were arrested at #OilMoneyMitch's DC office today. All were fighting for #GreenNewDeal and a liveable future. Show your support by signing this petition to tell Congress to support the GND https://t.co/dDxKbtPBxT pic.twitter.com/3jHAoWA3Y3

But that doesn’t mean Fensteinn is off the hook, either. The Youth Vs. Apocalypse activists returned to her San Francisco office Monday with a letter in hopes of explaining their objections to her alternative Green New Deal proposal. Feinstein was not in her office, but no one else from her team would accept the letter, and the children had to leave the it outside the door when the office responded with a lock and extra security, according to a series of videos shared on Twitter.

Correction: A previous version of this article stated that the young activists who confronted Dianne Feinstein are not affiliated with the Sunrise Movement, while they support its work. The language in this article has been clarified to reflect this.