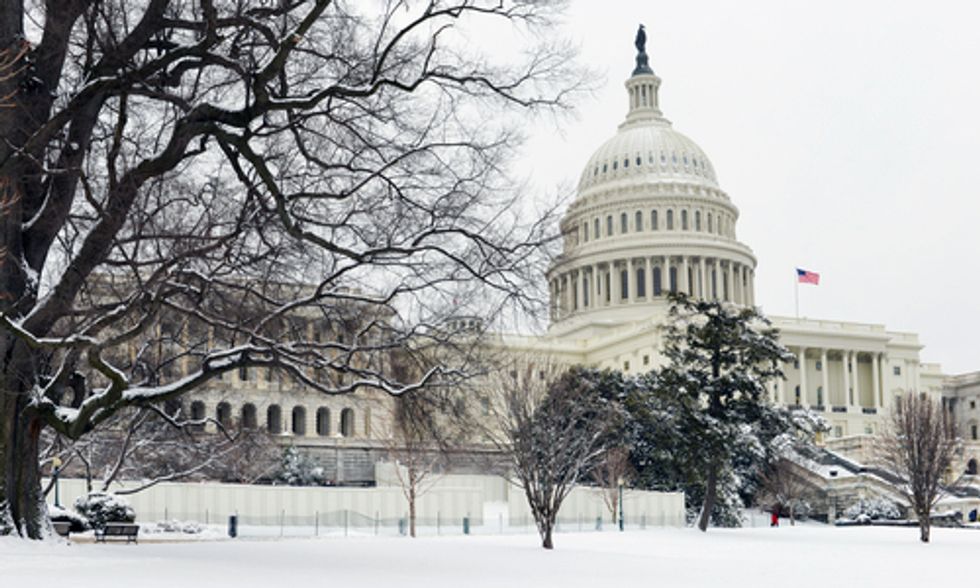 The Senate on Wednesday voted that “climate change is real and is not a hoax” in an amendment by Sen. Sheldon Whitehouse (D-RI) to the Keystone XL pipeline bill. The “hoax” amendment passed 98-1, with only Mississippi Sen. Roger Wicker voting “no.”

I'm glad almost every Senator acknowledged today that climate change is real. I hope now we can discuss what to do about it. #ActOnClimate

The Senate’s leading climate denier, Sen. James Inhofe (R-OK), made it clear that though he believes climate change is not a hoax, he doesn’t believe humans are the primary driver. He said for the record that, "climate has always changed" and that it's "arrogant" to think humankind can change climate.

In a second vote yesterday, Republicans rejected an amendment from Sen. Brian Schatz (D-Hawaii) that stated, “climate change is real and human activity significantly contributes to climate change.” The amendment was blocked in a 50-49 vote, short of the 60 that was needed for approval.

“Global warming is real, but the fact that are our highest governing body has just voted to deny humans are causing it is unreal,” said Environment America’s Anna Aurilio. “It’s dumbfounding that senate leaders are ignoring the truth on catastrophic climate change to push the agenda of big polluters. Americans are concerned about climate change and they want to do something about it. It’s staggering that so many senators are so out of touch with the environmental values we share across our country.”

“Today, the U.S. Senate voted on an amendment recognizing a simple scientific fact: human activity significantly contributes to climate change. The vote exposed 50 Senators who side with polluters over the health and welfare of the American people," said campaign director of Forecast the Facts, Brant Olson.

"Ninety-seven percent of climate scientists agree that the earth is warming and human activity is the cause. There are no national or major scientific institutions anywhere in the world that dispute the causes of climate change. Nearly 200 institutions worldwide, including the U.S. Navy and the Pentagon, have issued public statements emphasizing the threats of man-made climate change. History will not look kindly upon those who voted to ignore the facts at a moment when we could be taking action, and neither will voters in 2016. Marco Rubio, Ted Cruz and Rand Paul just made their presidential bids a lot harder, and voters are not going to want a climate change denier in the Oval Office,” said Olson.

This vote comes on the heels of President Obama’s State of the Union address Tuesday where he said, “No challenge—no challenge—poses a greater threat to future generations than climate change. 2014 was the planet’s warmest year on record. Now, one year doesn’t make a trend, but this does—14 of the 15 warmest years on record have all fallen in the first 15 years of this century.”