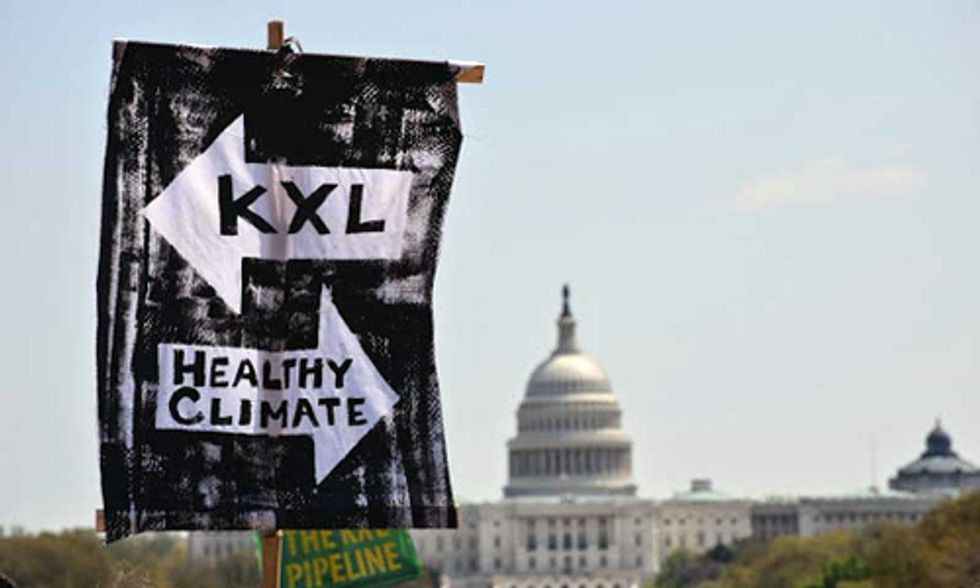 On Friday we learned that a lot of Republican U.S. senators and a smattering of Democrats are once again trying to make an end run around a legitimate process to assess the impacts of the Keystone XL tar sands pipeline, in favor of moving legislation authorizing its immediate construction.

While the political process in Washington, D.C. has come to give a lot of us pause, the good news is, it only furthers the resolve of tens of thousands of Americans to work harder to make their voices heard.

Recently we saw on the National Mall thousands of Americans—including Nebraskan landowners standing shoulder-to-shoulder with Native chiefs—calling on the president to reject the Keystone XL tar sands pipeline and protect our land, water, public health and climate.

So it is particularly painful to see some members of Congress once again trying to circumvent a legitimate process to push approval of Keystone XL—a pipeline that would take some of the world's dirtiest oil from Canada, through the heart of America, to the Gulf Coast and then off to overseas markets.

It doesn't matter that this pipeline will create almost no permanent jobs and only several thousand construction jobs, or that last year the Wall Street Journal reported that we, the U.S., is about to become the largest producer of oil and gas on the planet, overtaking Russia. It doesn't matter to these U.S. senators that our dependency on foreign oil has declined sharply.

This Senate amendment coming to a vote, sponsored by Sen. Hoeven (R-ND) and Sen. Landrieu (D-LA), would strip the president of his authority to decide whether or not the Keystone XL tar sands pipeline should go forward. Just like in 2012, a blatant political play is pushing the Senate to trump a democratic process in Nebraska that has yet to determine a route through that state.

You might wonder why after all this time we don't have a legitimate route through Nebraska. It is because the tar sands industry thought they were above the law. Turns out that was not the case. A Nebraska district judge found that the route was put in place through an unconstitutional process and it is back to the drawing board for Keystone XL.

It makes sense that the State Department decided to put the Keystone XL decision on hold until we have a route through Nebraska.

But it is no surprise that Keystone XL's supporters in the Senate are trying to push through an approval. It is Big Oil versus the Nebraska farmer and the industry can't believe that it is not getting its way after spending tens of millions of dollars in political donations in an effort to have things go their way.

Instead, the courts and the administration are listening to the ranchers and farmers who have been tending their land for generations. People like Randy Thompson who have built alliances across political lines to say no to a dirty tar sands pipeline crossing their ranch lands. They know a tar sands spill into the Ogallala Aquifer would ruin their lands and their livelihoods and poison their families.

These landowners have legitimate concerns that deserve to be heard. The Keystone XL pipeline would take tar sands through some of the most sensitive regions of the Ogallala Aquifer. And we've learned that tar sands crude is particularly damaging when it spills. After nearly four years and a billion dollars in clean up costs, large portions of the Kalamazoo River in Michigan is still contaminated by submerged tar sands.

Are these voices really so unimportant that we are willing to let a Canadian tar sands pipeline company and their allies in Congress ride roughshod over them? Absolutely not. The landowner and Native voices are at the heart of this fight against dirty energy.

We can do better by our farmers and communities by demanding clean power and rejecting dirty energy projects such as the Keystone XL tar sands pipeline.