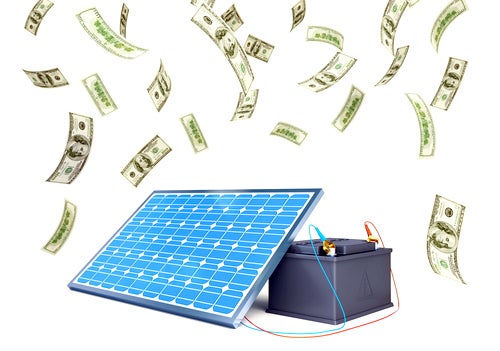 An important vote took place March 13 on a critical bill to extend renewable energy and energy efficiency incentives in the Senate. Many of these policies either have expired or are about to expire at the end of this year, and this bill (introduced by Sen. Debbie Stabenow (D-MI) as an amendment to the Transportation bill) would have extended those incentives, providing vital support for our growing clean energy economy.

Unfortunately, but not unexpectedly, the vote “failed” 49 to 49. This is certainly not the final word on these incentives, and advocates will continue to aggressively seek their extension as other legislative opportunities arise.

Still, for clean energy companies and investors it creates further uncertainty and complexity in an already complex business. For supporters of clean technologies solutions, it represents another challenge as we try to create new American jobs, clean up our environment, and regain our leadership in the global clean energy economy.

How much is at stake with these incentives?  A lot.

A recent study by the non-partisan Congressional Budget Office (CBO) gives us some data to show how far we’ve come with clean technologies, and how much is at risk. Briefly, CBO calculated how much the government spent on energy technologies in one year (technically, they scored two types of energy subsidies for 2011 looking at both tax preferences like tax credits and deductions, and spending by the Department of Energy on energy technologies, although there’s a lot of nuance they skipped).

Through this effort, CBO calculated $24 billion in government subsidies for fuel and energy technologies in 2011. About $16 billion of those were for tax credits and deductions provided to renewable energy and energy efficiency. The remainder ($3.5 billion) was spending by the Department of Energy (DOE) on research and development in energy technologies, with about half of that pot going to renewables and energy efficiency.

The end result—$20 billion for clean energy in 2011. That’s a huge win. After decades of arguing about the need for a strong commitment by the government to develop alternative technologies, and the importance an aggressive ramp-up of clean energy investment, we’ve reached a milestone where renewable technologies and energy efficiency received more funding in one year than fossil fuel technologies.

Unfortunately, 2011 is not representative of U.S. energy policy, nor should it be used, by itself, as a datapoint to represent what’s happening in energy policy. As the CBO study points out, the vast majority of the incentives for renewable energy and efficiency either expired at the end of 2011, or are expiring this year. Big chunks of DOE funding were one-time expenditures from the Stimulus. Put another way, 2011 could be the fond memory we look back on as the clean energy sector hurtles down a cliff. And, as demonstrated by the vote on March 13, policymakers don’t seem ready to do anything about it. Is this any way to build a new industry and lead the world towards a cleaner and safer future?

Digging Deeper into the CBO Study

Of course, the CBO is the kind of nuanced study that can get misconstrued by the press and, unfortunately, will likely wind up being used for political purposes.  But if you dig deeper, there’s a much more important story here.

For example, take this chart from the CBO report which shows the value of subsidies provided to specific technologies over the last 30+ years.

Two things jump out—the amount of funding provided to non-clean energy technologies over time (especially compared to clean energy) and the longevity and certainty of that support.

Possibly the two most crucial aspects of effective energy policy designed to support new technologies is the aggregate funding provided during a technology’s early stage, and the creation of long-term policy certainty that allows industry and investors to efficiently plan how best to allocate capital in deploying that new technology. The CBO report goes to some length to point out the historical complexity in calculating energy subsidies and demonstrates that over the last 30 years, in addition to much higher funding amounts, there’s been much greater long-term certainty and economic value given to the fossil fuel industry than clean energy.

A few months back, another mainstream study from Ben Healey and Nancy Pfund at DBL Investors delved into this topic and came up with the same conclusion. It too demonstrated a similar phenomenon—that the overall benefit has been much more heavily weighted in the past 50 years to oil and gas and nuclear.

But back to 2011, where renewable energy and energy efficiency are starting to turn the corner, driven by innovative entrepreneurs, hard working Americans, and government investment in these critical, innovative new technologies.

Some have pointed to this government support as somehow unfair…as if the oil and gas sector hadn’t received twelve times the amount of subsidies over the last 90 years as the renewable industry (chart from the DBL study).

Others say this is a violation of the free market, ignoring the massive amount of support nuclear energy and oil and gas power received in their first thirty years of existence (chart again from the DBL study).

Others still say this spending is a waste—I invite you to view the E2 clean energy jobs newsletter archives, highlighting nearly 300 companies that have hired workers in the clean energy economy in just the last few months, to judge if that’s true. Or the recent Blueprint for a Secure Energy Future, that demonstrates the immense growth taking place throughout the clean energy sector.

A brief glance at these charts shows how much more funding has been provided to fossils, both historically and in the previous decades.

But here we are, yet again facing the challenge of high summer gas prices, battling pollution from fossil fuel emissions and being forced to divert resources to address our energy security.

The last few years have finally provided renewable energy and energy efficiency the chance to catch up with fossil fuels—to give us the chance to break the cycle of fossil fuel addiction we’ve been stuck in throughout the 20th and 21st centuries.

Incentives and other energy policies for renewable energy and energy efficiency level the playing field, and build on our country’s enthusiasm for these clean technologies, and our aspirations for leadership and a cleaner and healthier future.