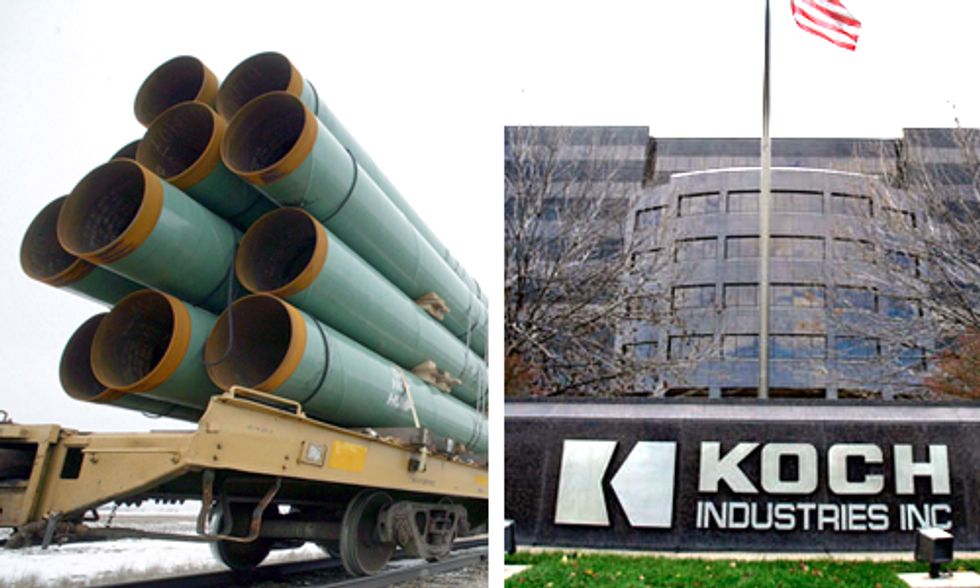 As a writer of environmental issues, as well as a person concerned about the future of the planet, I am anxiously awaiting the decision on the Keystone XL pipeline. I keep questioning if the U.S. is ready to set an example by eliminating fossil fuel extraction. Will we get down to the hard work of moving forward on a different energy path?

The letter points to Americans for Prosperity, which was founded by David Koch, as having “run a multi-year pressure campaign in favor of the Keystone XL pipeline, including airing ads against members of Congress for opposing the pipeline.”

With all the recent news about oils spills and the 25th anniversary of the Exxon Valdez disaster—you have to wonder about the advisability of 1,660 miles of pipeline transversing the nation. It will be transporting 830,000 barrels of oil on a daily basis from the Canadian Alberta oil sands to the refineries of the beleaguered city of Port Arthur (home to several refineries, chemical plants and an incinerator). I have written about the abysmal lack of environmental justice for the indigenous communities in Canada and the low-income urban victims in Port Arthur.

There are constantly new sidebars in the debate. One was about the contractor who compiled the Environmental Impact Statement (EIS), and if there was a conflict of interest stemming from a prior relationship with TransCanada. Allegations aside, the EIS did make note of “elevated levels of carcinogen and mercury” that would be emitted into the air and acknowledged the “difficulty” of cleaning up potential spills.

On their page about the Keystone  XL pipeline, the U.S. State Department puts forth that it is considering the application from TransCanada Corporation based on numerous factors “including” foreign policy concerns, economics, energy security, health and the environment.

When I looked at the comments from the public (close to 125,000), it was clear on why those who were opposed to the pipeline had weighed in. Their apprehensions referenced the Gulf of Mexico oil spill, finding alternative sources of energy, the abuse of eminent domain and the impact on populations of color.

The pro-pipeline comments skewed to job creation and energy security. A majority of them used identical language stating, “I’m writing to encourage you to approve the construction of the Keystone XL pipeline as quickly as possible.”

Okay. So each side is mobilizing in their own manner. Yet I couldn’t help thinking of those rote answers when I read the press release from the offices of Rep. Henry A. Waxman (D-CA) and Sen. Sheldon Whitehouse (D-RI), which released a letter they had sent to Koch Industries. It specifically asked if their business or affiliated companies had “financial interests” in the pipeline.

Addressed to David L. Robertson, the president and COO of Koch Industries, the letter said:

“Groups backed by Charles and David Koch have lobbied and run political ads to support construction of the pipeline. But Koch Industries has consistently denied financial motives played any role in these activities, asserting that the Keystone XL pipeline has ‘nothing to do with any of our businesses.’ We want to know whether this is true.”

The letter points to Americans for Prosperity, which was founded by David Koch, as having “run a multi-year pressure campaign in favor of the Keystone XL pipeline, including airing ads against members of Congress for opposing the pipeline.” It goes on to underscore the Koch financial connection to entities seeking to dismiss the science that has emphasized “the relationship between the use of carbon-based fuel and climate change.”

Rep. Waxman and Sen. Whitehouse present eleven detailed questions, along with requests for documentation. Some of the points covered are:

Question eleven is my favorite, because it seeks to unpack the trail of money between Koch Industries, Koch Affiliated Foundations and donations to Donors Trust/Capital (qualified on DeSmogBlog as a major funder of anti-science groups), with groups that are involved in “climate science research.”

The closing line from Rep. Waxman and Sen. Whitehouse reads: “Your cooperation in providing this information to Congress would be greatly appreciated.”

It will be interesting to see what response, if any, the two legislators—and the American people—receive.