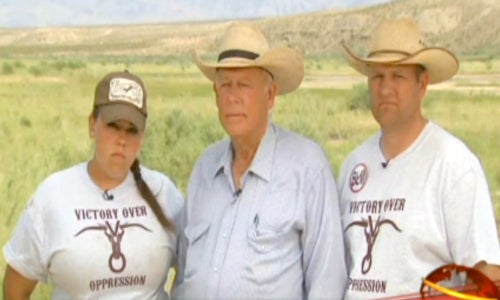 U.S. Sen. majority leader Harry Reid never minces words, and there was no reason for him to begin doing so when discussing the standoff between supporters of a private rancher and federal officials last week in Nevada.

“Those people who hold themselves out to be patriots are not. They’re nothing more than domestic terrorists,” Reid told the Las Vegas Review-Journal at an event sponsored by the publication.

“I repeat: what went on up there was domestic terrorism.”

Before guns were drawn, the federal government had been removing rancher Cliven Bundy’s cattle and impounding them in a corral in nearby Mesquite, NV, because he had kept his more than 900 head of cattle on a piece of 600,000-acre federal land for the past two decades without paying taxes. The Bureau of Land Management (BLM) increased grazing fees in 1993 in order to save critical habitat for the endangered Mojave Desert tortoise. Bundy owes the federal government about $1 million.

Bundy and his family did not respond to Las Vegas Review-Journal’s requests for comment on Reid’s remarks, but his son, Aman Bundy, told Fox News that Reid should be removed from office if he doesn’t understand that “we the people got together and made something right.”

Of course, that’s not how Bundy’s defiance is coming across.

“He continues to thumb his nose at authority.”

Why the BLM Battle at Bundy Ranch Matters

Wolf Slaughter Is Not American