Sen. Portman, Protect the People Not the Polluters 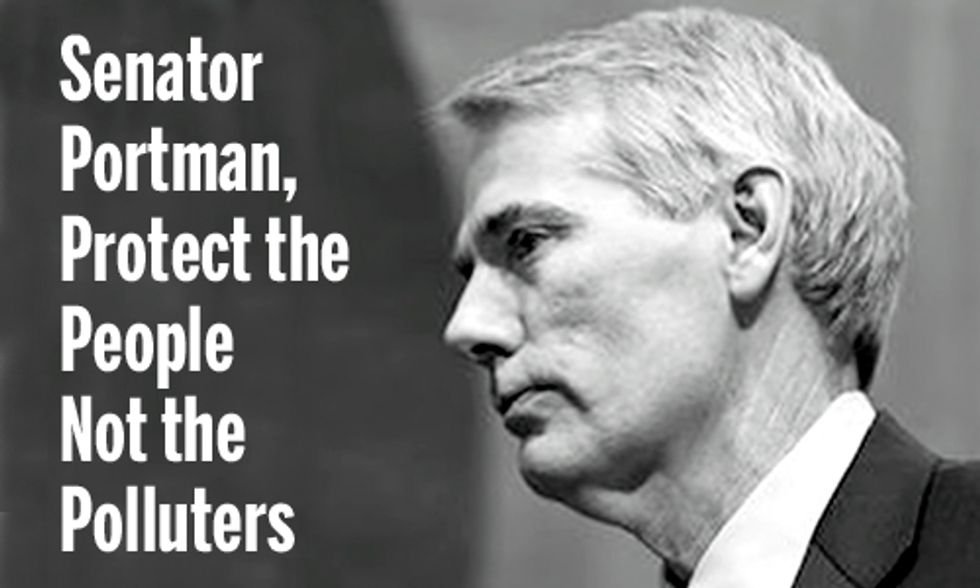 Climate Change is doing a number on the state of Ohio and the nation at large. We are clearly at the point where talking about the problem is not enough. Action is needed, but some of our decision makers, who should be leading the charge to address this problem, are moving in the opposite direction.

For example, Sen. Rob Portman (R-OH) recently introduced an amendment allowing states to reject the Clean Power Plan, the historic effort to cut carbon pollution from our power sector for the first time. This legislation would be an unprecedented step toward dismantling the Clean Air Act, which has improved our air since it was signed into law in 1970 to protect Americans from life-threatening airborne contaminants that can be hazardous to public health. Sen. Portman's latest actions would permit power plants to keep dumping carbon pollution unfettered, leading to some pernicious climate change impacts, like the erratic weather that contributes to crop failures and the algae blooms which are fouling Lake Erie and waterways around the state. Sen. Portman's amendment would also leave more conventional pollutants in the air, prompting childhood asthma attacks and a bevy of other public health issues.

Needless to say, the Senator's actions are not helping to tackle these problems, even though he sometimes acknowledges that these are serious threats.

This week, Natural Resources Defense Council launched a TV ad we hope will encourage Sen. Portman to work to address the problems and help move the nation in the right direction toward protecting the health and future of America, including Ohio's youngest Buckeyes, and the air we all breathe.

Portman has signaled that he wants to be seen as moving in the right direction on this issue. We know he can take a stand to do the right thing; he has acknowledged climate change exists—albeit while hedging on its causes—and pushed for some commonsense energy efficiency policies; but he always stops short when it's time to take meaningful action.

More recently, he has taken steps that will prevent us from solving the problems. For example, he's taken votes to attack the Clean Power Plan, against setting a goal for the U.S. to use more renewable resources and against tax credits that would create good-paying jobs in the clean energy economy, against supporting efforts of cities and communities to prepare for the impacts of climate change, and against efforts of the United States to encourage other nations to fight climate change along with us.

By saying he recognizes the reality of climate change, and then taking legislative action to dismantle cornerstone American clean air protections, he is eliminating his ability to solve a serious problem he acknowledges exists, and that will have dire consequences for Ohio and the nation.

That is not lost on people in his home state where a majority of his constituents support cuts in carbon pollution and a deeper investment in clean energy. It's extraordinarily disappointing that an elected official, who believes climate change is real and caused by human activity, has the backing of public opinion to take action, will not take the necessary steps to lead towards a solution. And given the incredibly promising economic and job opportunity for Ohio's manufacturing sector to provide the tools and innovations needed to shift towards a clean energy economy, the Senator's actions are doubly confounding.

America's rise and fall is dependent on the leaders we elect to represent us, in our cities, states and in Washington. We rise when we come together to create sound policies, but fall when basic protections for our health and safety take a back seat to profit or personal agendas. The bottom line—votes matter—because votes become laws and good laws will help protect the health and well-being of the people. Bad laws, like the abysmal one Portman has proposed, do ... well ... the opposite.

Sen. Portman needs to know that he can't take the health of his constituents for granted. We encourage him to think about how his votes impact the lungs of Americans, and of the youngest Ohioans. We hope he will take a step back and consider how clean air is essential not only for healthy lungs, but also consider the hearts and minds of the people of Ohio, our country and future generations. Our children will inherit the earth we give them and we have a moral obligation to leave them a planet that is better than we found it.

The Clean Air Act is a plan that helps us keep that promise. We hope Sen. Portman will embrace the next opportunity to uphold his end of this important responsibility. Ohio's citizens are depending on him, and so are the rest of us Americans.