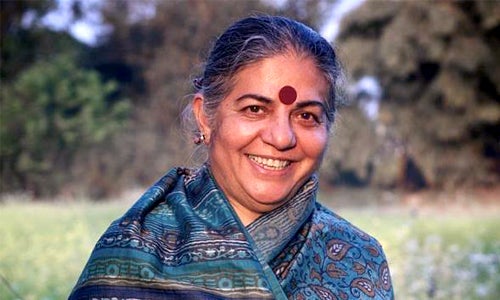 I am glad that the future of food is being discussed, and thought about, on farms, in homes, on TV, online and in magazines, especially of The New Yorker’s caliber. The New Yorker has held its content and readership in high regard for so long. The challenge of feeding a growing population with the added obstacle of climate change is an important issue. Michael Specter’s piece, however, is poor journalism. I wonder why a journalist who has been Bureau Chief in Moscow for The New York Times and Bureau Chief in New York for the Washington Post, and clearly is an experienced reporter, would submit such a misleading piece. Or why The New Yorker would allow it to be published as honest reporting, with so many fraudulent assertions and deliberate attempts to skew reality.

Seeds of Doubt contains many lies and inaccuracies that range from the mundane (we never met in a café but in the lobby of my hotel where I had just arrived from India to attend a High Level Round Table for the post 2015 SDGs of the UN) to grave fallacies that affect people’s lives. The piece has now become fodder for the social media supporting the Biotech Industry. Could it be that rather than serious journalism, the article was intended as a means to strengthen the biotechnology industry’s push to ‘engage consumers’? Although creative license is part of the art of writing, Michael Specter cleverly takes it to another level, by assuming a very clear position without spelling it out.

“Early this spring, the Indian environmentalist Vandana Shiva led an unusual pilgrimage across southern Europe. Beginning in Greece, with the international Pan-Hellenic Exchange of Local Seed Varieties Festival, which celebrated the virtues of traditional agriculture, Shiva and an entourage of followers crossed the Adriatic and travelled by bus up the boot of Italy, to Florence, where she spoke at the Seed, Food and Earth Democracy Festival. After a short planning meeting in Genoa, the caravan rolled on to the South of France, ending in Le Mas d’Azil, just in time to celebrate International Days of the Seed.”

On April 26, at the Deutsches Theater Berlin, one of Germany’s most renowned state theatres. I gave a keynote speech for a conference on the relation of democracy and war in times of scarce resources and climate change. From Berlin I flew into Florence for a Seed Festival organized by the Government of the Region of Tuscany, Italy, The Botanical garden of Florence (the oldest in Europe), Banca Etica and Navdanya. I was joined by a caravan of seed savers, and we carried on to Le Mas d’Azil where we had a conference of all the European seed movements.

It would be convenient in the narrative that Specter attempts to weave, to make this exercise look like a joyride of “unscientific people on a ‘pilgrimage.'” Writing about the European governments, universities and movements accurately would not suit Specter’s intention because the strong resistance (including from governments) to GMOs in Europe is based on science.

My education doesn’t suit his narrative either: a Ph.D. on the “Hidden Variables and Non-locality in Quantum Theory.” Specter has reduced my M.Sc. Honors in Physics to a B.Sc. for convenience.  Mr. Specter and the Biotech Industry (and The New Yorker, by association) would like to identify the millions of people opposing GMOs as unscientific, romantic, outliers. My education is obviously a thorn in their side.

“When I asked if she had ever worked as a physicist, she suggested that I search for the answer on Google. I found nothing, and she doesn’t list any such position in her biography.”

Specter has twisted my words, to make it seem like I was avoiding his question. I had directed him to my official website since for the past few months I have repeatedly been asked about my education. The Wikipedia page about me has been altered to make it look like I have never studied science. The Biotech Industry would like to erase my academic credentials. I have failed to see how it makes me more or less capable of the work I do on evolving and ecological paradigm of science. I consciously made a decision to dedicate my life to protect the Earth, its ecosystems and communities. Quantum theory taught me the four principles that have guided my work: everything is interconnected, everything is potential, everything is indeterminate, and there is no excluded middle. Every intellectual breakthrough I have made over the last 40 years has been to move from a mechanistic paradigm to an ecological one. I had the choice to continue my studies in the foundations of Quantum Theory at the Tata Institute of Fundamental Research (TIFR) or to take up a research position in interdisciplinary studies on science policy at IIM, Bangalore. I chose the latter because I wanted a deeper understanding of the relationships between science and society.

This was my email response to Specter, copied to the editor of The New Yorker, David Remnick: 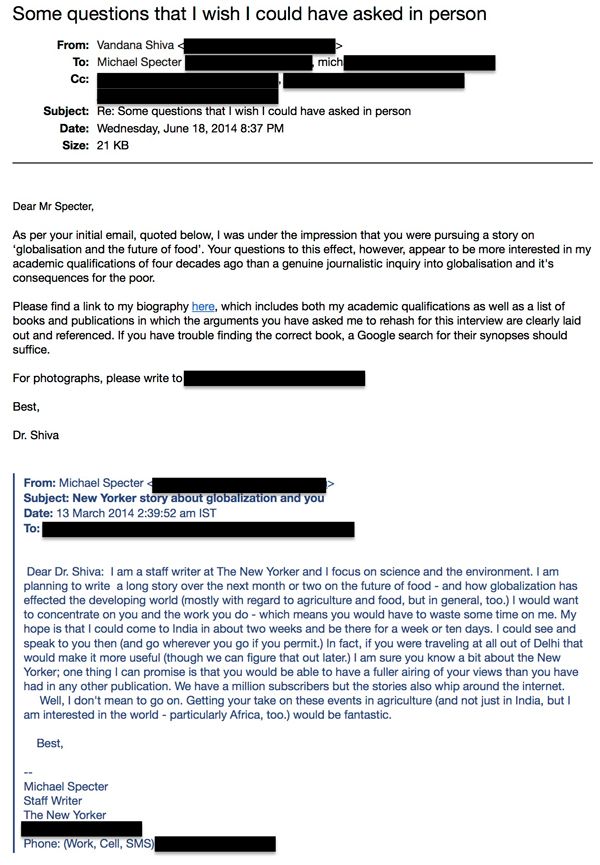 A tight schedule must have kept Specter from mentioning Africa in his piece, although he intended to, given that a considerable amount of the world’s poor are also in Africa and must be fed. But Africa might not have needed addressing, probably because the Biotech Industry is happy with the progress they are making in deploying GMO cotton and banana in Africa. In the U.S., six-week human trials of these bio-fortified bananas are happening as I write this. And what are these bananas? They are bananas into which they have put a gene found in another variety of banana that has elevated levels of Beta-Carotene. They could have just used the banana with higher Beta-Carotene if the intent was to alleviate Vitamin A Deficiency, but there’s no money in that.