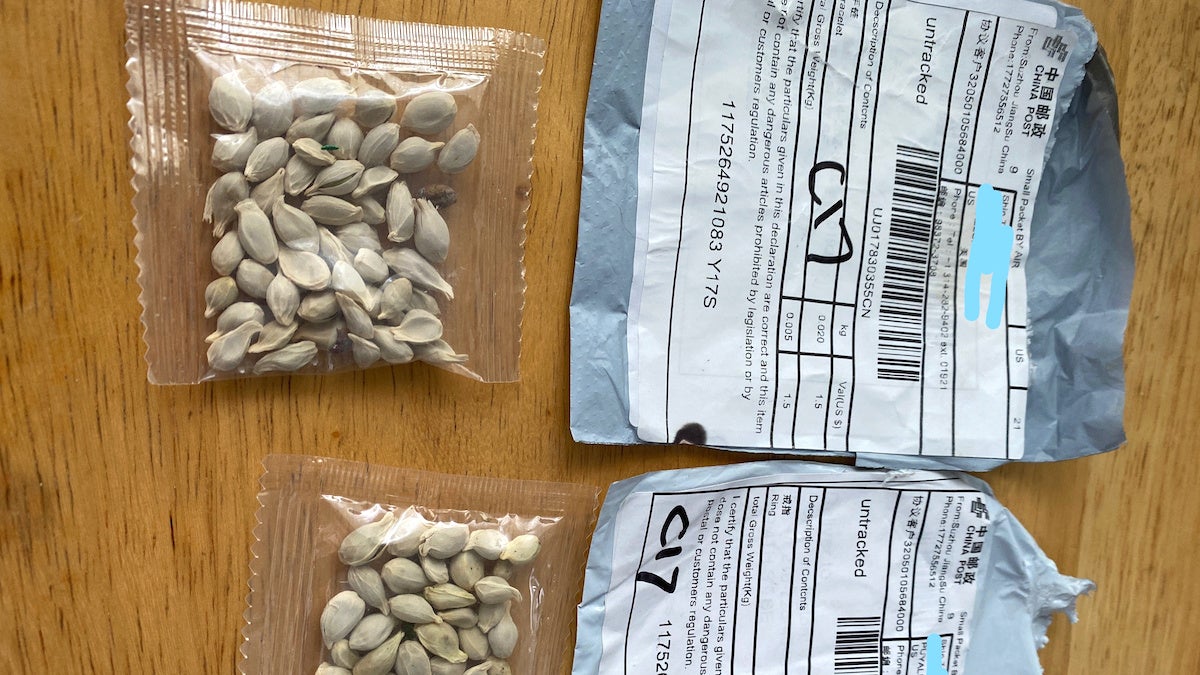 At least 27 states have warned their residents not to plant any seeds they receive from mysterious, unsolicited packages that appear to have been sent from China. Washington State Department of Agriculture / Twitter

At least 27 states have warned their residents not to plant any seeds they receive from mysterious, unsolicited packages that appear to have been sent from China, The New York Times reported Sunday.

Agriculture officials also told anyone who received one of the packages to alert authorities. They are worried the seeds could harm the environment by introducing invasive species, insect pests or diseases.

“Invasive species wreak havoc on the environment, displace or destroy native plants and insects and severely damage crops,” the Virginia Department of Agriculture and Consumer Services said in a news release Friday, as CNN reported.

“Taking steps to prevent their introduction is the most effective method of reducing both the risk of invasive species infestations and the cost to control and mitigate those infestations.”

VDACS urges #Virginia residents who have received unsolicited seed packets from #China not to plant the seeds & contact ReportAPest@vdacs.virginia.gov. Residents in other states should contact their state department of ag located here https://t.co/CcNKN2ScZv pic.twitter.com/JpPNp1rCFv

The seed packages have been mailed to people in several states. Photos shared online by agricultural departments show they come in white or yellow packaging and have Chinese characters and the words “China Post” on the outside, according to The New York Times. Several packages falsely claimed to contain jewelry. Some reported in Louisiana claimed to contain ear buds or toys, the Louisiana Department of Agriculture and Forestry said.

It is not yet clear why the seeds were sent.

“At this point in time, we don’t have enough information to know if this is a hoax, a prank, an internet scam or an act of agricultural bio-terrorism,” Kentucky Agriculture Commissioner Ryan Quarles said, as CBS News reported. “Unsolicited seeds could be invasive and introduce unknown diseases to local plants, harm livestock or threaten our environment.”

The police department in Whitehouse, Ohio said the seeds appeared to be linked to an internet scam called “brushing,” in which online vendors send cheap, unsolicited items and then write positive reviews on the part of the receiver in order to boost their business.

“Although not directly dangerous, we would still prefer that people contact us to properly dispose of the seeds,” the police wrote on Facebook.

The U.S. Department of Agriculture (USDA) is investigating the situation and also said there was no evidence the seeds were sent for any purpose besides a brushing scam.

“USDA is currently collecting seed packages from recipients and will test their contents and determine if they contain anything that could be of concern to U.S. agriculture or the environment,” the department said in a statement.

#APHIS is working closely with @CBP and State Depts of Ag re: unrequested seeds. If received, pls contact State Dept of Ag https://t.co/g0WhR57Wv3 or the #APHIS State Plant Health Office https://t.co/CdHtWghDbC. Keep packaging and do not plant seeds from an unknown origin! pic.twitter.com/LORKeTh4Tc

In addition to Virginia, Louisiana, Kentucky and Ohio, agricultural departments have issued warnings about the packages in Washington State, Colorado, Delaware, Georgia, Iowa, Maryland, Minnesota, Mississippi, Wyoming, Montana, Nebraska, Nevada, New Hampshire, North Carolina, South Carolina, North Dakota, Oklahoma, Tennessee, Texas, West Virginia, Florida, Kansas and Alabama, according to The New York Times. People also received the seeds in Utah and Arizona, according to local news reports. Officials in Arkansas, Michigan, New Jersey and Oregon also put out warnings about the packages but did not say if any of their residents had received them.

Chinese foreign ministry spokesman Wang Wenbin said the country’s postal service had asked for the packages to be sent back to China for further investigation, but that their records appeared to have been falsified, Reuters reported. Wenbin said the Chinese postal service worked to follow the rules for sending seeds.

“Say that when I import seed into the country that has not been here before — wheat seed, for example — I know they’ll bring it in and they’ll actually grow it out at the A.P.H.I.S. facility to check it for disease,” she said.

But, in the case of the mysterious seeds, that hasn’t happened.

“The reason that people are concerned is — especially if the seed is the seed of a similar crop that is grown for income and food, or food for animals — that there may be plant pathogens or insects that are harbored in the seed,” Bull said.