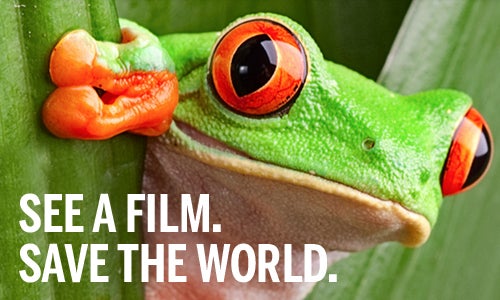 The 2015 festival features films from 31 countries. Most screenings include discussions with filmmakers, environmental experts and cultural leaders. In addition to over 60 filmmakers who will present their film, speakers will include environmentalist Jean-Michel Cousteau, climate expert Joe Romm, actress Kristin Davis and Tommy Wells, the new Director of the District Department of the Environment.

The festival will also feature programs like the one that explores Cuba’s vibrant coral reefs and considers the impact that lifting the U.S. embargo will have on the country’s pristine environment with renowned marine biologist Dr. David E. Guggenheim. There will also be panel discussions such as “Filmmakers as Catalysts for Change,” presented with The Climate Reality Project; “Film as a Tool for Peace and Climate Change;” and “OK, I’ve Watched the Film, Now What?” to further explore the topic of impact.

Films are screened at more than 55 venues throughout the Washington metropolitan area, including museums, embassies, libraries, universities and local theaters. More than 80 percent of programs are free.

Opening night will feature the Washington, DC premiere of Bikes Vs. Cars, Project Ice and Charlie’s Country. Earlier that day there will be a screening of Pandas: The 3D Journey Home at the National Geographic Society and a screening of a few short films geared towards kids at the Martin Luther King, Jr. Memorial Library. Check out below the trailers for the opening night films with descriptions provided by the film fest.

Bikes Vs. Cars: Traffic gridlock around the world is frustrating people, wasting their time, polluting the air and contributing to climate change. Director Fredrik Gertten (Bananas! and Big Boys Gone Bananas! about Latin American farm workers) investigates the daily global spectacle of traffic and looks for solutions. Following bicycle activists’ crusades to foster meaningful change, the film documents the struggle for bicyclists in a society dominated by cars. From bike activists in Sao Paulo and Los Angeles, fighting for safe bike lanes, to the city of Copenhagen, where forty percent commute daily by bike, Bikes Vs. Cars considers the revolutionary changes that could take place if more cities made room for bicyclists.

Project Ice: Formed by ice, filled by ice, often covered by ice, the Great Lakes encapsulate human exploration, migration, development and where we’re headed. Project: Ice views North America’s fresh water inland ocean through the prism of ice, from the crossroads of history, science and climate change. North America’s five Great Lakes contain a staggering twenty percent of all the fresh water on the planet. Lake Superior by itself holds ten percent of Earth’s fresh water. Our 4K digital cinema cameras explore this shared Canadian-American resource that holds a timely and telling story of geology, human movement, population growth, industrialization, cultural development, recreation and the profound impact people have had on the very environment they cherish and depend upon. Ice sits at the heart of it all. Directed by William Kleinert. Produced by William Kleinert, Leslie Johnson and Kevin Kusina.

Charlie’s Country: Living in a remote Aboriginal community in the northern part of Australia, Charlie is a warrior past his prime. As the government increases its stranglehold over the community’s traditional way of life, Charlie becomes lost between two cultures. His new modern life offers him a way to survive but, ultimately, it is one he has no power over. Finally fed up when his gun, his newly crafted spear and his best friend’s jeep are confiscated, Charlie heads into the wild on his own, to live the old way. However, Charlie hasn’t reckoned on where he might end up, nor on how much life has changed since the old days. Directed by Rolf de Heer. Produced by Nils Erik Nielsen, Peter Djigirr and Rolf de Heer. Official Selection, Un Certain Regard, 2014 Cannes Film Festival.