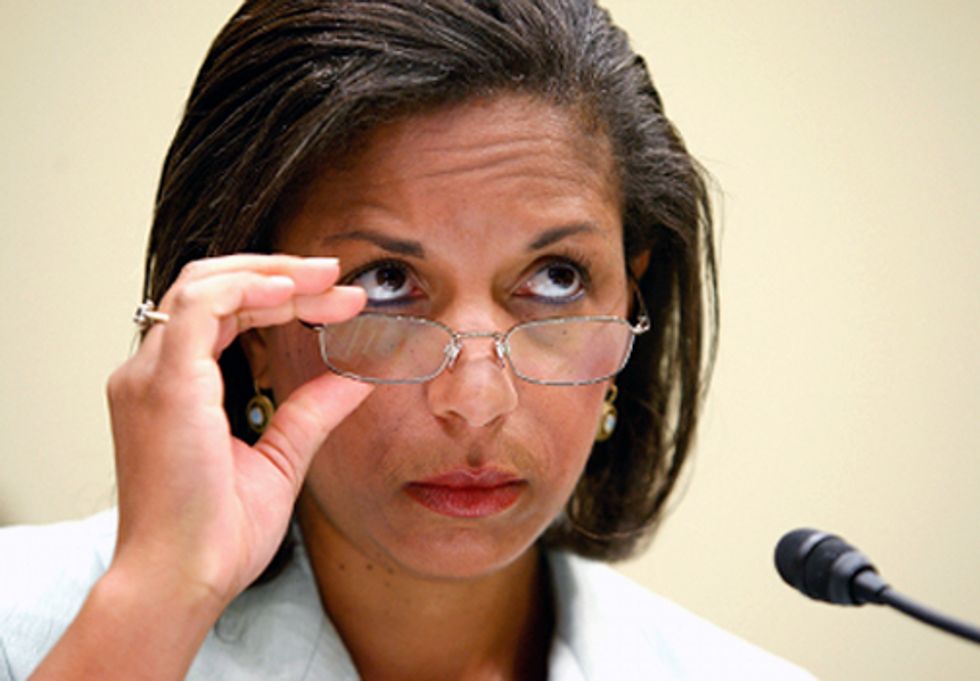 Susan Rice, the candidate believed to be favored by President Obama to become the next Secretary of State, holds significant investments in more than a dozen Canadian oil companies and banks that would stand to benefit from expansion of the North American tar sands industry and construction of the proposed $7 billion Keystone XL pipeline. If confirmed by the Senate, one of Rice’s first duties likely would be consideration, and potentially approval, of the controversial mega-project.

Rice's financial holdings could raise questions about her status as a neutral decision maker. The current U.S. ambassador to the United Nations, Rice owns stock valued between $300,000 and $600,000 in TransCanada, the company seeking a federal permit to transport tar sands crude 1,700 miles to refineries on the Texas Gulf Coast, crossing fragile Midwest ecosystems and the largest freshwater aquifer in North America.

Beyond that, according to financial disclosure reports, about a third of Rice’s personal net worth is tied up in oil producers, pipeline operators and related energy industries north of the 49th parallel—including companies with poor environmental and safety records on both U.S. and Canadian soil. Rice and her husband own at least $1.25 million worth of stock in four of Canada’s eight leading oil producers, as ranked by Forbes magazine. That includes Enbridge, which spilled more than a million gallons of toxic bitumen into Michigan’s Kalamazoo River in 2010—the largest inland oil spill in U.S. history.

Rice also has smaller stakes in several other big Canadian energy firms, as well as the country’s transportation companies and coal-fired utilities. Another 20 percent or so of her personal wealth is derived from investments in five Canadian banks. These are some of the institutions that provide loans and financial backing to TransCanada and its competitors for tar sands extraction and major infrastructure projects, such as Keystone XL and Enbridge’s proposed Northern Gateway pipeline, which would stretch 700 miles from Alberta to the Canadian coast.

In 2010, for instance, when Rice and her husband held at least $1.5 million in Royal Bank of Canada, the institution was labeled Canada's most environmentally irresponsible company by the Rainforest Action Network for its support of tar sands development. Public pressure from environmentalists and Canada’s First Nations tribes convinced the bank to stop funding tar sands projects earlier this year.

“It’s really amazing that they’re considering someone for Secretary of State who has millions invested in these companies,” said Bill McKibben, a writer and founder of the activist groups 350.org and Tar Sands Action, which have organized protests against the Keystone XL project. “The State Department has been rife with collusion with the Canadian pipeline builders, and it’s really distressing to have any sense that that might continue to go on.” Emails obtained by an environmental group last year show what critics call a “cozy and complicitous relationship” between State Department officials and a lobbyist for TransCanada, who was also a former deputy campaign director for current Secretary of State Hillary Clinton's failed 2008 presidential bid. The agency also assigned an environmental impact review of the Keystone project to a company with financial ties to TransCanada.

As ambassador to the United Nations, Rice has not been directly involved in the State Department’s Keystone XL review, which came to a head at the end of 2011. After initially indicating it would likely approve TransCanada’s application, the State Department ordered a review of alternate routes to avoid putting critical water sources in Nebraska at risk. The move, which officials said would likely push the approval process back to the first three months of 2013, was an attempt to spare the Obama administration a politically risky decision just before an election year.

Greenlighting the pipeline would have hurt the president with environmental advocates—more than 1,200 people were arrested in anti-Keystone protests led by McKibben at the White House in Summer 2011. But denying it outright would have given Republicans an election year attack line, saying Obama had cost the nation much-needed jobs (although independent studies have shown that TransCanada’s job creation claims for the pipeline are greatly exaggerated). As it was, the president still received significant heat, and Mitt Romney pledged to approve the pipeline on Day 1 if he had won the election.

Were she to become Secretary of State, Rice would be in charge of the new environmental review process and would be in a position to decide whether to issue TransCanada a permit for sections of Keystone XL stretching from Oklahoma to the Canadian border. (The pipeline’s southernmost leg has already been approved and is under construction in Texas—with protesters perching in trees and chaining themselves to construction equipment in an attempt to stop it).

Rice is reportedly Obama’s favorite to take the helm at the State Department next year. Clinton has said repeatedly that she plans to step down shortly after Obama’s second inauguration in January. In addition to Rice, reportedly the president's lead candidate for the job, U.S. Senator John Kerry had also reportedly made it onto the president’s short list. Kerry, whose net worth of at least $232 million makes him far wealthier than Rice, does not own shares of TransCanada or Enbridge, the major tar sands pipeline companies, although he does have stock in some other Canadian energy interests.

According to the Center for Responsive Politics, Rice’s net worth sat somewhere between $23.5 million and $43.5 million in 2009, the latest year for which the center has done a full analysis of her finances. That makes her either the wealthiest person currently serving in the executive branch or a close second to Clinton. (The uncertainty surrounding these figures is due to the way officials are required to disclose their investments; instead of declaring the specific amount of stock they own, they are required by law only to declare a range).

Other public officials have been criticized for pushing for the Keystone XL project while standing to benefit financially. The nonprofit Sunlight Foundation watchdog group reported in December 2011 that four members of Congress who own shares in TransCanada had pressed for the pipeline’s approval—either by supporting bills that would have forced the State Department to issue a permit or by writing to Clinton or Obama, urging them to give the go-ahead. Rice’s ownership of TransCanada stock was noted by the Sunlight Foundation but not considered a conflict of interest at the time, because she had no direct role in the approval process.

Neither Rice’s office nor the White House returned OnEarth’s calls for comment about her financial holdings.

According to the reports she filed in May 2012, Rice and her husband have a wide-ranging portfolio that includes more than 100 securities, such as IBM, Monsanto, Apple, BP and McDonald’s. Dan Auble, a researcher at the Center for Responsive Politics who studies the personal finances of public officials, said it’s not unusual to see energy investments play a significant role in their financial portfolios, as they do with Rice and her husband. (Auble said the holdings of a public official’s spouse are included in financial disclosure reports because they have the same potential to create a conflict of interest.) In their case, however, nine of the 14 holdings they claimed that top $500,000 are Canadian energy interests or banks.

If Rice does get the Secretary of State job, federal ethics officials could recommend that she sell her stock in TransCanada and related companies before deciding on Keystone XL, Auble said. But that’s not a sure thing.

Leading Keystone opponents say they wouldn’t necessarily oppose Rice’s nomination—but they would want someone else in charge of deciding the pipeline’s fate. “It would be one of the first decisions she would make, and she’s not qualified to make an unbiased decision,” said Jane Kleeb, the executive director of Bold Nebraska, a group that has fought to block the Keystone XL pipeline.

“It’s one more clear sign that the State Department should not be handling this,” added McKibben (who is also an OnEarth contributing editor). Both advocates believe the U.S. Environmental Protection Agency or the White House Council on Environmental Quality would be more qualified to assess the environmental impacts of Keystone XL. But an executive order issued by President George W. Bush in April 2004 makes the Secretary of State responsible for approving pipelines that cross the U.S. border. Kleeb suggested that Obama could change that order to shift the decision-making responsibility elsewhere.

Environmental advocates (including the Natural Resources Defense Council, which publishes OnEarth) have sought to block the Keystone XL pipeline and further development of the Alberta tar sands fields due to their climate impact and potential for pollution and dangerous oil spills. Extracting bitumen—a heavy, viscous black oil—requires intensive open-pit mining in the heart of Canada’s boreal forest. More dirty and corrosive than conventional crude, bitumen requires extensive refining to become useable fuel. The entire process uses vast amounts of energy and water and creates three times the global warming pollution of conventional fuel, while shipping the bitumen through pipelines means an additional risk of corrosion and leaks.

Despite the environmental risks, tar sands development has become a major focus of the Canadian government and pillar of the country’s economy, championed by Prime Minister Stephen Harper, whose administration has denounced environmental advocates and First Nations tribes opposed to pipeline construction as extremists. Alberta's tar sands contain the world's third largest proven oil reserve, but they’re landlocked and remote—hence the desire for more pipelines to provide Canadian energy companies with access to ports and refineries.

According to her most recent financial disclosure reports, along with her TransCanada investments, Rice and her husband own at least $1.5 million worth of stock in Enbridge (Canada’s No. 3 oil producer, according to Forbes), Cenovus (No. 7), and Encana (No. 8), as well as at least $1.25 million in Imperial (No. 2), $50,000 to $100,000 in Suncor (No. 1) and $15,000 to $50,000 in Canadian Natural (No. 6). (TransCanada is ranked at No. 5 by Forbes). The couple has at least $1.25 million invested in Transalta, Alberta's largest coal-fired electricity power producer, and at least $1.5 million in Canadian Pacific Railway, which transports coal, oil, and gas and has been a major financial beneficiary of the North American energy boom.

On the banking side, Rice has investments totaling at least $5 million and up to $11.25 million in Bank of Montreal, Bank of Nova Scotia, Canadian Imperial Bank of Commerce, Royal Bank of Canada, and Toronto Dominion. A report by the Dutch consulting firm Profundo Economic Research says several of these same banks are largely responsible for underwriting the expansion of Canada’s tar sands industry. “Investment in tar sands infrastructure now surpasses that of manufacturing across all of Canada,” according to the report.

Which means that regardless of Keystone XL’s fate, Canadian companies will continue to seek ways to pump bitumen from northern Canada to coastal refineries and ports, where it can be shipped to Europe, China and other overseas markets. NRDC and other environmental groups have presented evidence that Enbridge is making plans to reverse a pipeline that currently carries regular crude from the New England coast to Montreal, and use it to ship tar sands oil in the other direction instead.

Since it crosses the U.S.-Canadian border, that plan would also require State Department approval.

This piece was originally posted on OnEarth.org.