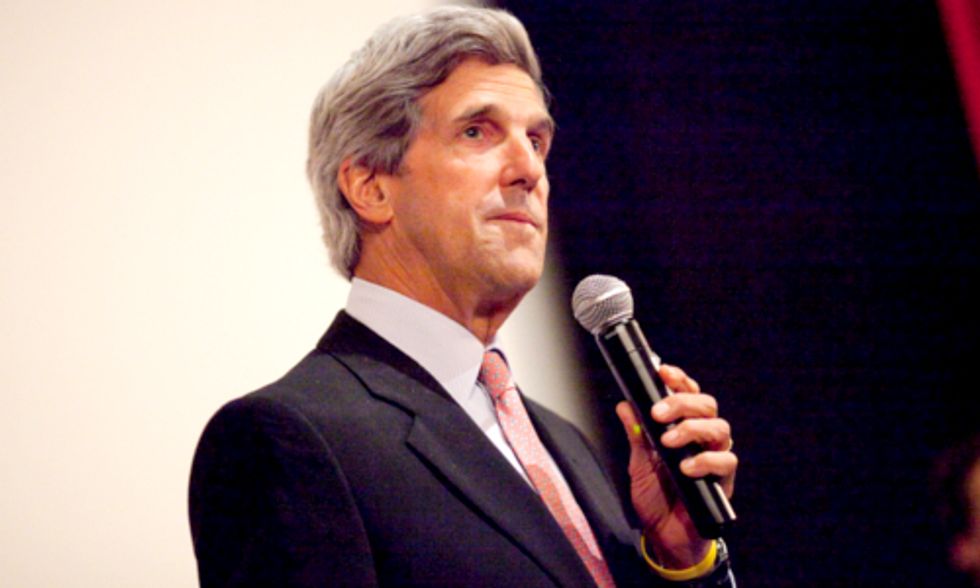 The tubes have been buzzing over a new New York Times report on Secretary of State John Kerry’s aggressive pursuit of a new global climate agreement, which  has some clear implications for approval of the controversial Keystone XL tar sands oil pipeline. In a nutshell, things ain’t looking so good, and that has us wondering if the U.S. coal industry is also going to face some serious problems down the road.

Approval of the Keystone XL pipeline would pull the rug out from under everything that Secretary Kerry has been working for. Photo credit: Center for American Progress

The Keystone XL pipeline requires White House approval because it crosses a U.S. border. For those of you new to the topic, the Canada-based project will convey diluted bitumen (yes, that dilbit) down from Canadian tar sands (yes, that tar sands) oil fields through the U.S. midsection to Gulf Coast refineries, destined for overseas markets.

However, tar sands oil is not the only fossil at stake here. As a fossil fuel export-enabling project, Keystone XL is a big, fat, square peg aimed at the round holes of Secretary Kerry’s global climate policymaking efforts. Now, think about that for a minute, and then take a look at what the New York Times article implies about that other square peg, coal exports from the U.S.

Coal Is The Canary In The Coal Mine

The Times notes that in the absence of Congressional action on climate management, President Obama has focused on executive action. That includes, notably, a new U.S. Environmental Protection Agency (EPA) regulation that will eventually shut down the worst-polluting coal fired power plants in the U.S. while preventing the construction of new ones.

That’s all well and good but we’ve frequently noted that as U.S. coal consumption declines, U.S. coal exports have gone up, so as a matter of global emissions the EPA action simply shifts the problem overseas.

This is where Secretary Kerry comes in. According to the Times, he is looking ahead to the negotiation of a major climate pact in 2015, which means that coal-hungry China will be front and center.

Now let’s connect the dots. If the 2015 pact does happen, and if it sets some meaningful milestones for transitioning out of coal fired power production, the global market for U.S. coal will start to dry up.

The key to Secretary Kerry’s success is U.S. credibility on the subject of greenhouse gas management, which is certainly helped by the EPA action. Additionally, the Times notes that Secretary Kerry has established some important trust with his counterparts in China, having just brokered an agreement with that country for a joint phase-down of hydrofluorocarbon production.

Now take a look at that Keystone XL pipeline, and you can see how approval of the project would pull the rug out from under everything that Secretary Kerry has been working for. It puts the U.S. in the position of aiding and abetting the introduction of more fossil fuel into the global market, while putting domestic safety and security at risk.

Kerry has stated that he will not involve himself directly in the Keystone review process, which was well under way when he became Secretary of State. However, Keystone XL raises the kind of red flags that he has been pursuing over a decades-long record of climate action, one highlight being the 2007 publication of This Moment on Earth, a book on the power of individuals to change environmental policy.

More recently, one of Secretary Kerry’s first major speeches as new Secretary of State in 2013 was a real barn-burner, in which he outlined the economic benefits of an aggressive global policy to reduce greenhouse gas emissions, even if you imagine that there is no scientific consensus on the relationship between fossil fuels and global warming:

Having said all that, we’d be surprised as anybody if the Keystone XL pipeline does get approval. However, now might be a time to get your forks ready.