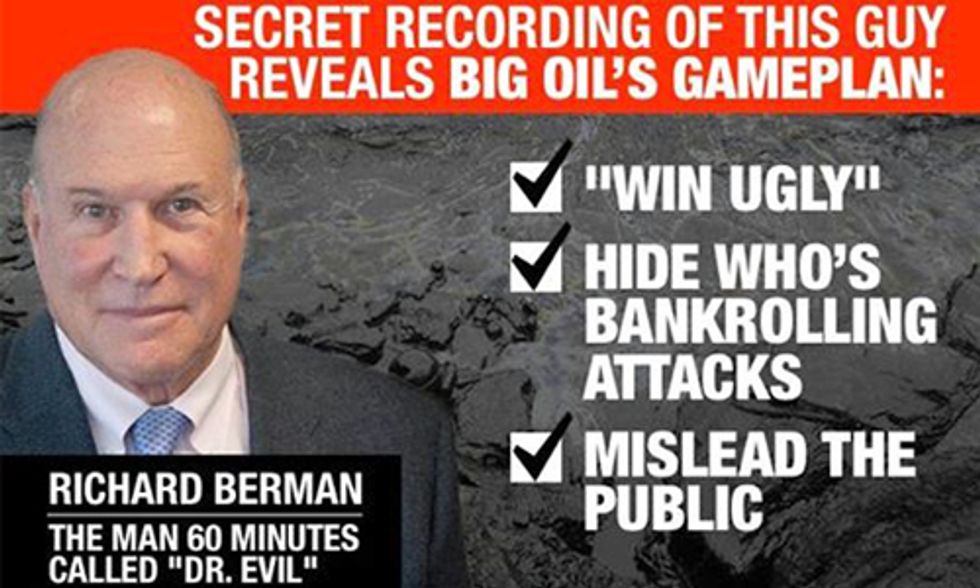 Right-wing public relations consultant/astroturf king Richard Berman probably wasn't very happy when he saw yesterday's New York Times. Like the now infamous American Legislative Exchange Council (ALEC), Berman's success depends in large part on anonymity. He is known for his use of what's called "astroturf" groups—organizations that appear to be community or citizen advocacy groups with names like "Center for Consumer Freedom" but are really shell groups for untraceable corporate donations—to attack labor unions, environmental laws, attempts to regulate the food industry and anti-smoking measures. Lately, he's been a conduit for fossil fuel interests with his Big Green Radicals campaign, based on the mockery and personal destruction of those who advocate for the environment.

At the secretly taped presentation, Richard Berman and Jack Hubbard laid out their strategy of playing dirty, saying "You can win ugly or lose pretty."
Photo credit: Oil Change International

But one industry executive had enough. The anonymous executive leaked a tape to the New York Times of a June event in Colorado Springs at which Berman and Jack Hubbard, a vice president at Berman & Company, were soliciting money from oil and gas executives for the Big Green Radicals effort, telling them that they needed to exploit fear, greed and anger, and to stoke resentment against environmentally-minded celebrities. The executive told the New York Times the presentation left a bad taste in his mouth.

At the secretly taped presentation, Berman and Hubbard laid out their strategy of playing dirty, saying "You can win ugly or lose pretty."

Winning ugly is what he specializes in. The BigGreenRadicals website attacks big environmental groups like the Sierra Club, Food & Water Watch and the Natural Resources Defense Council, saying these organizations "have morphed into multi-million dollar lobbying machines that use questionable tactics to scare the American public and policymakers into supporting unnecessary and unreasonable policies."

Talk about the pot calling the kettle black!

Even Robert F. Kennedy, Jr. chimed in on this one:

"You know climate deniers and big polluters are desperate when they turn to the tired old tactics of the tobacco industry to try and save themselves. Whether it's cigarettes or dirty fuels, toxic products are on their way out, and their proponents are left scraping the bottom of the barrel. Its not going to work—dirty tricks won’t save dirty fuels."

Berman told the executives at the June meeting that he had researched the personal histories of board members of these groups, looking for information that could be used to embarrass and discredit them. He emphasized to them how they could operate anonymously through his company, shoveling six-figure donations to his front groups without their involvement being revealed.

“People always ask me one question all the time: ‘How do I know that I won’t be found out as a supporter of what you’re doing?’" Berman said. “We run all of this stuff through nonprofit organizations that are insulated from having to disclose donors. There is total anonymity. People don’t know who supports us.”

They're starting to learn, and that probably won't work to Berman's benefit.