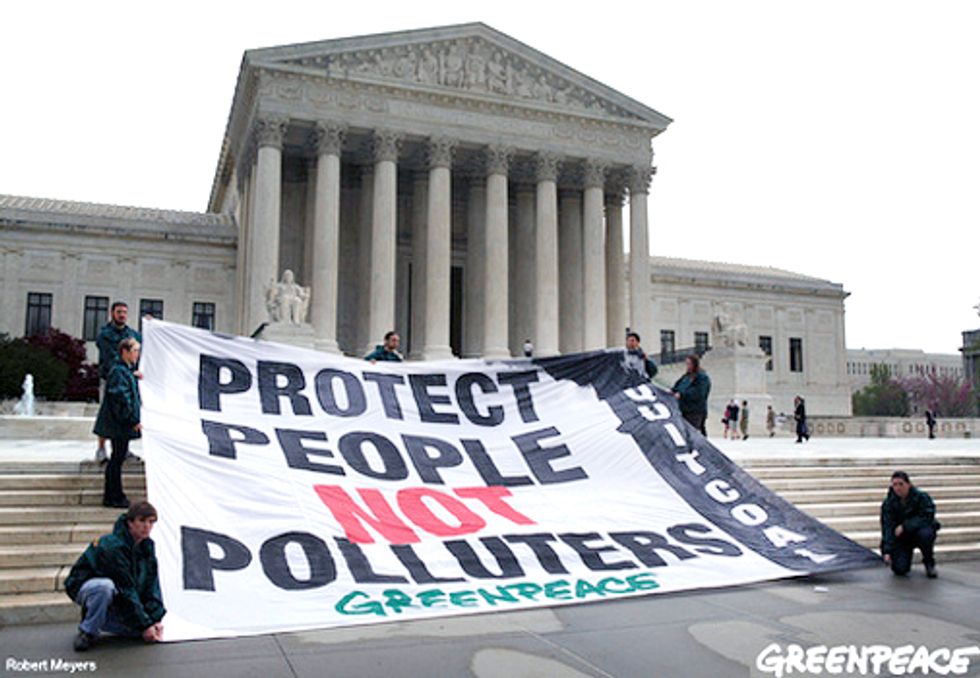 Greenpeace activists hold a banner in front of the U.S. Supreme Court in Washington, D.C., April 19, 2011. The banner was in reaction to the Obama administration taking the side of polluters in a case before the court, AEP vs Connecticut. Photo by Robert Meyers

Americans went into the voting booth yesterday with horrific images of the fallout from superstorm Sandy fresh in their minds. Pictures of homes ripped from their moorings, stories of children whisked away by rushing waters, reports of elderly people trapped on top floors of buildings—the true cost of ignoring science's warnings about global warming are now all too vivid.

But as you prepared to pull the lever for your favored issues and candidates, I hope that more positive images also crossed your mind. As they always do, our citizens are working together to dig each other out from the devastation left in Sandy's wake.

At Greenpeace, our first thoughts after Sandy were about the safety of those left homeless in the storm's wake, so we did what little we could, sending our Rolling Sunlight truck to bear witness and help power relief efforts in Rockaway Beach with its solar panels. We've been encouraged to see how much others in the community are doing as well. You should help however you can too.

But after doing what we can for those hurt by the storm, it's time to think about global warming and what we can do about it. And, as you would expect in the wake of a massive crisis that scientists say was driven in part by global warming, many Americans are demanding that their leaders finally find the courage to stand up to the fossil fuel industry and take action on climate change.

At Greenpeace we are far from the only ones connecting the dots. My new issue of Bloomberg Businessweek arrived last week, shouting from the cover: "It's Global Warming, Stupid." New York's Mayor Bloomberg, the most famous independent voter the country, said he voted for the man he thought was most likely to stop global warming because he wants his city protected from increasingly extreme weather that is fueled by global warming.

President Obama took good steps to address global warming during his first term, enacting some policies that support clean energy and others that cut pollution from cars and power plants. But he never made global warming a priority. Of course, Sandy wasn't President Obama's fault. But if he doesn't hear this storm as a wake-up call that he echoes to businesses, governments, and the public, future generations will judge him for not doing more to prevent future disasters.

First, the president should acknowledge that the decades of inaction wrought by industry lobbyists mean that we're already facing a reality of extreme weathers like Sandy. You don't need a Ph.D. to see that—you just need the Weather Channel. The president must convene stakeholders from the local, state and federal levels to prepare for the impacts of global warming. We need to start planning now for the next Hurricane Sandy, for more droughts like the one that decimated crop yields in the Midwest this year, for longer and more intense wildfire seasons in the West, and the myriad other impacts coming our way.

Second, the president needs to go after the carbon pollution that's driving storms like Sandy. That means getting serious about replacing fossil fuels with renewable energy. He should prioritize cutting emissions from power plants, but there's a long list of actions he can take, like cutting taxpayer subsidies to coal, oil and fracking, passing tax incentives for electric cars and safe, renewable energy like wind and solar, and putting a price on carbon so that the polluters pay for the damage they've done. And he must not fall into the trap of thinking natural gas is the answer—at the end of the day, gas is still a dirty fuel, and every dollar spent on fracking and gas plants is a dollar wasted because it's not spent on renewable energy and efficiency.

But the most important thing the president can do is to use the bully pulpit to unite the country behind solutions. He needs to make global warming a priority, and explain—as many times as necessary—that this issue is tied up in every challenge America faces. We will never have real national security if our water resources edge closer to running out and the most anti-American and conflict-rife regions of the world face greater and greater climate impacts. We won't stay competitive with China if we fail to invest in the clean energy technologies that are helping to drive job growth there. We won't balance the national checkbook if we continue to respond reactively to $50 billion storms year in and year out. And American families won't have peace and prosperity if we let their houses get wiped away by superstorms because we lacked the political courage to stand up to Exxon-Mobil and Peabody coal.

These tasks won't be easy. King Coal and Big Oil will fight the president harder and dirtier than ever to protect their profits with no regard for the Americans who bear the brunt of storms like Sandy. But now is the moment, while the horrific pictures from New York and New Jersey are still seared into the public consciousness, for President Obama to set us on a course to a world which I would feel far better about passing on to my children.

If President Obama rises to meet this challenge, Americans will remember Sandy, and we will stand behind him.