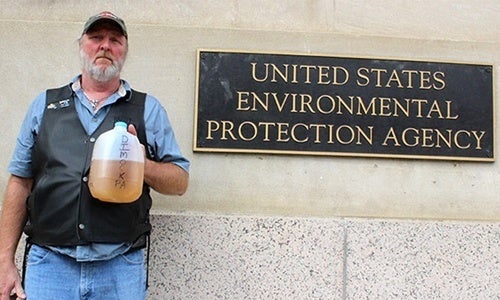 The U.S. Environmental Protection Agency’s (EPA) independent Scientific Advisory Board Members of the Hydraulic Fracturing Research Advisory Panel released today a second review of the U.S. EPA’s draft assessment saying that that they still have “concerns” regarding the clarity and adequacy of support for several findings presented in the EPA’s draft Assessment Report of the impacts of fracking on drinking water supplies in the U.S. 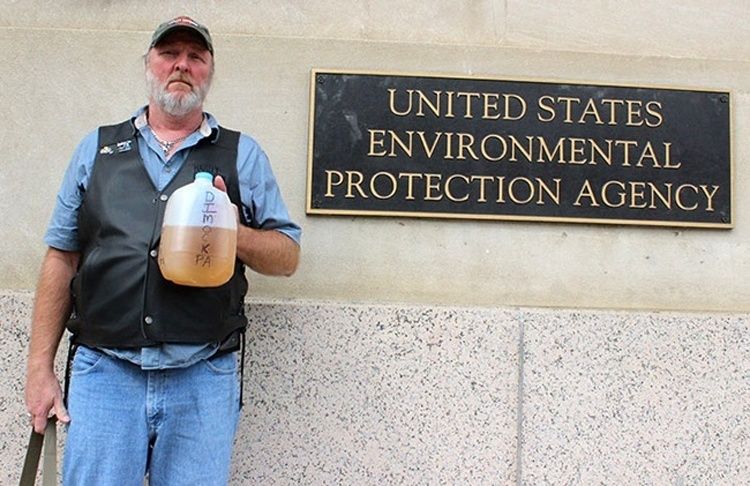 Ray Kemble of Dimock, Pennsylvania, holds a jug of discolored water from his well, contaminated by nearby fracking operations while standing outside of the U.S. EPA building in Washington, DC. Photo credit: Food & Water Watch

This second draft report is still very critical of the EPA’s top line claim of no “widespread, systemic impacts” on drinking water from fracking and urges the agency to revise the major statements of findings in the executive summary and elsewhere in the draft Assessment report to be more precise, and to clearly link these statements to evidence.

In its own words, the EPA SAB “is concerned that these major findings as presented within the executive summary are ambiguous and appear inconsistent with the observations, data, and levels of uncertainty presented and discussed in the body of the draft Assessment Report.”

We are confident that this tension between President Obama’s EPA and the EPA’s own independent advisory board of scientists is a direct consequence of political considerations trumping scientific evidence on fracking, which demonstrates many instances and avenues of water contamination and many areas of problems and harms.

It is encouraging to see the EPA’s Science Advisory Board once again highlighting concern with what was clearly a mis-titled and misleading draft report from the Obama Administration on fracking and drinking water. Now it’s time for action. It’s time for the administration to go back, clearly articulate the hazards its own studies have identified, and honestly address the inherent dangers of fracking we know to exist.