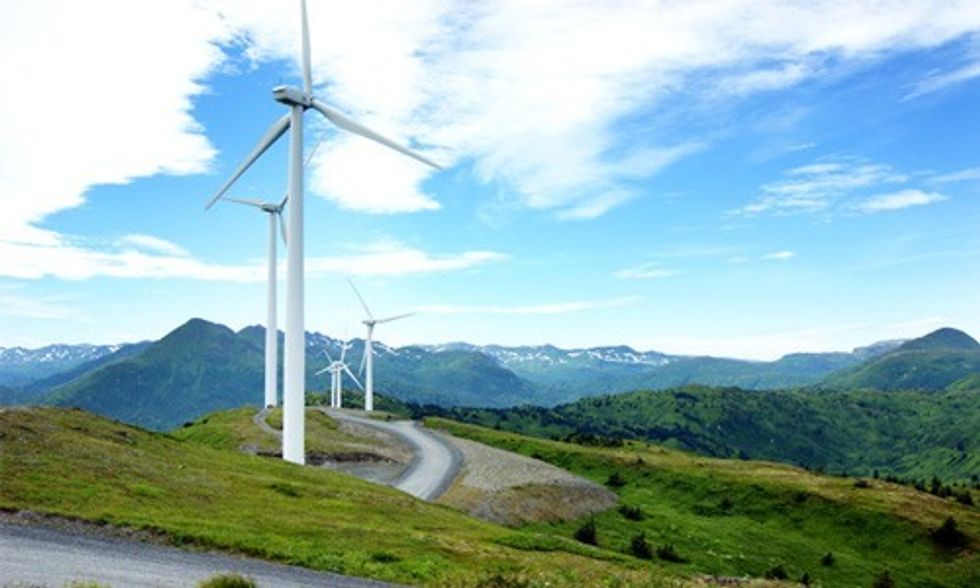 As most Alaskans can attest, energy in The Last Frontier is expensive. The average residential electricity rate of more than 18 cents per kWh is a full 50 percent higher than the national average, ranking among the highest in the country. That’s in part because outside the 50 hydro plants throughout the state, most of Alaska’s rural communities rely on imported diesel for their electricity. But the folks of Kodiak Island (pop. 15,000) in southern Alaska—powered almost 100 percent with renewable energy—have a different story to tell.

Kodiak Island in southern Alaska is powered 99.7 percent by hydro and wind.

Although Kodiak Island, the second-largest island in the U.S., relied on hydropower for 80 percent of the electricity production, it was also burning 2.8 million gallons of diesel per year, at an annual cost of $7 million. In the face of climate change and high electricity costs, the board and managers at Kodiak Electric Association (KEA) set a goal of producing 95 percent of the community’s electrical needs with renewable energy by 2020. They actually arrived there well ahead of time, and are now 99.7 percent renewably powered by wind and hydro.

The State of Alaska has a renewable energy fund created in 2008 by the Alaska Energy Authority to help finance renewable energy projects and reduce and stabilize the cost of energy. KEA received $16 million in grant money through the fund and $39.6 million through clean renewable energy bonds (CREBs). The CREB funds gave KEA a near-zero-interest loan for the project.

The first step was to purchase three General Electric 1.5-megawatt (MW) wind turbines. The turbines were installed in 2009, which was challenging according to Kodiak Electric Association CEO Darron Scott. “There was not a lot of information back then on how to keep the grid frequency and voltage steady with an influx of variable wind power,” Scott told Rocky Mountain Institute. “It was uncharted territory.” But after a grid integration study, which assessed the technical and economic impacts on the grid, the first three wind turbines were installed.

A second modeling study was performed with real data from the first phase, and a second phase of three more wind turbines was proposed. But before installing the second phase of wind turbines, KEA wanted to upgrade the existing hydropower system. KEA felt that to ensure grid stability, the amount of wind power being put onto the grid had reached its maximum. The 20-MW, two-turbine Terror Lake hydroelectric plant was built in 1984, and forward-thinking engineers left an empty bay for a third turbine in case Kodiak’s load grew. In 2011, Kodiak’s peak load grew to more than 26 MW, and the increased load, along with a desire to rely on more renewables, led to the installation of a third 10-MW turbine.

Besides covering peak loads, this turbine provided the necessary capacity and enhanced grid stability to allow more variable renewable power, like the three new proposed wind turbines, to come online. The new turbine also provided system redundancy, as the 30-year-old turbines require maintenance, which can now be done during low load seasons without switching to diesel.

A role for storage

For smaller electricity grids with quickly fluctuating demand and variable renewable energy inputs, a way to store the energy can be a great asset. In 2012, the three additional 1.5-MW wind turbines were installed, along with 3 MW of battery storage. The battery storage systems provide 30–90 seconds of bridging power when the wind output decreases, in order to ramp up the hydro system. Now, the Kodiak port wants to install a new 2-MW crane, potentially causing destabilizing power fluctuations leading to undesirable cycle of the batteries and the potential for consumption of more diesel to provide spinning reserve. Instead, KEA plans to add an additional flywheel energy storage system in about two or three months that will help compensate for the peaking crane loads. The PowerStore flywheel units from ABB will provide voltage and frequency support, will help manage the variable wind power and will mean fewer cycles through the batteries, extending the life of the battery systems.

The financial rewards of the project have been great. According to Scott, the community is saving. Electricity rates have gone down, and are now 2.5 percent lower than in 2001. “The stable electricity rates have also brought in more construction, expanded the fishing industry, and brought in more jobs and tax revenue,” Scott told RMI. And, at least one seafood company is capitalizing on the renewable energy to promote its sustainable salmon, as its salmon production plant is powered by wind energy.

The State of Alaska has a goal of reaching 50 percent renewable energy by 2025. Kodiak Island is providing a great example of how to reach and even go beyond that goal. “There are many communities in Alaska with significant microgrid achievement,” George Roe, research professor with the Alaska Center for Energy and Power, told RMI, “and there is local, national and global potential for building on Alaskan hard-won experience such as that in Kodiak.” In fact, the Alaska Energy Authority and KEA won the 2014 State Leadership in Clean Energy Award for their renewable energy programs.

“Both the Alaska Energy Authority and the Kodiak Electric Association are putting into practice five principles that I believe are in our national interest,” said Alaskan Senator Lisa Murkowski in a congratulatory speech. “And those are to make energy abundant, affordable, clean, diverse and secure.” Kodiak went beyond its reliance on hydropower, adding different renewable resources and storage, making its electrical system more reliable and secure and a model for other communities looking to add variable renewable sources to their grid.