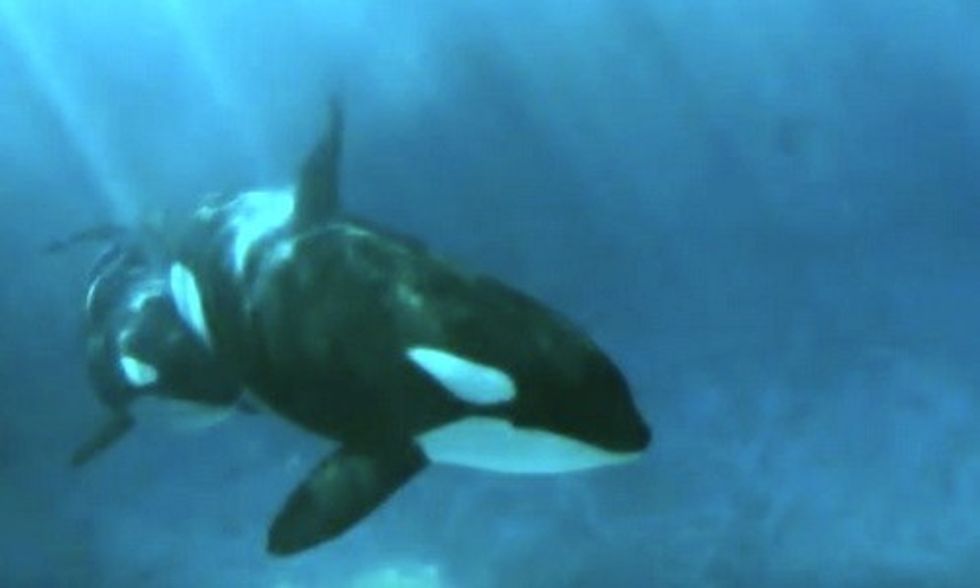 A disturbing new video of a SeaWorld San Diego orca too "depressed" to nurse her calf is going viral, and has once again shined a spotlight on the controversial practice of keeping killer whales in captivity.

The two observe signs of "stereotypic behavior," such as the mother orca staring at the bottom of a concrete wall and ignoring her baby's repeated head-bumps to get fed. They add that Makani's constant nudging for food has left a bruise on the mother's stomach.

"That head-bump is a precursor to nursing," Hargrove says in the video.

"The calf is constantly trying to get food, so desperately hungry, so bored," Visser says. "It's a stereotypic behavior."

According to Hargrove, who appeared in the 2013 documentary Blackfish and authored the book Beneath the Surface which criticizes SeaWorld, Kasatka is "so depressed she's incapable of taking care of her calf."

The video above was part of the upcoming documentary, Superpod, about the state of endangered orcas in the Pacific Northwest.

In this timelapse shot by the same documentary crew, an orca is seen floating and nearly motionless in SeaWorld's stadium tank for six minutes as a busy crowd shuffles about.

A marine mammal expert told The Dodo that this orca's extensive floating in the video above is almost never seen in the wild. "It's very unique to captivity; it's very, very uncommon in the wild," Dr. Heather Rally, a veterinarian who works with PETA, said about the motionless orca. "It's believed to be the result of chronic stress, boredom and inhibition of natural behaviors that occurs as a result of inadequate living conditions at places like SeaWorld."

The timelapse video was shown at the California Coastal Commission's hearing earlier this month over SeaWorld's $100 million tank expansion plan.

According to the video's description, "This video played mere minutes after the Chief Vet at SeaWorld testified that their orca are 'not bored.'"

Although SeaWorld's expansion plan was ultimately approved, there was one major condition: No more captive breeding.

The new tank, which is part of SeaWorld’s planned Blue World Project meant for orca research and education and set to open in 2018, will have a surface area of 1.5 acres and a depth of 50 feet.

However, as Visser pointed out to the Los Angeles Times, whales in the wild swim an average distance of 138 miles per day and dive to depths of about 600 feet.

“These new tanks do not meet these basic requirements,” she said. “No facility ever will.”

SeaWorld plans to challenge the commission's decision. The ocean park also said in a statement after the commission's vote, “Breeding is a natural, fundamental and important part of an animal’s life, and depriving a social animal of the right to reproduce is inhumane.”

Ever since the documentary Blackfish debuted, the problematic nature of keeping these creatures in captivity has been thrust to the forefront.

While organizations such as SeaWorld say that orca captivity is harmless, here are seven facts you should know from the Whale and Dolphin Conservation (WDC) about the 151 orcas that have been taken into captivity from the wild since 1961:

3. At least 162 orcas have died in captivity, not including 30 miscarried or still-born calves.

4. SeaWorld holds 24 orcas in its three parks in the United States and owns (at least) a further four at Loro Parque in Spain. At least forty-four orcas have died at SeaWorld.

5. One of the most infamous capture incidents saw over 80 whales from the Southern Resident population of orcas in Washington State rounded-up at Penn Cove in 1970. Seven were taken into captivity while as many as five whales died. Today this population is recognized as endangered. Only one captured whale, Lolita, is still alive, held at Miami Seaquarium.

6. The longest surviving orca in captivity is Corky, captured in 1969 from the Northern Resident population that inhabits the waters around Vancouver Island, Canada. She is held at SeaWorld in San Diego. None of her seven offspring in captivity have survived. Her family (known as the A5 pod) continue to thrive in the wild, including Corky's brother, Fife, who you can adopt to help support our work.

7. At least 14 orcas have been taken from the wild into captivity since 2002, most recently in Russia.

Check out this infographic from the WDC to learn more about orca captivity:

1 in 5 American Animal Species Is at Risk of Extinction