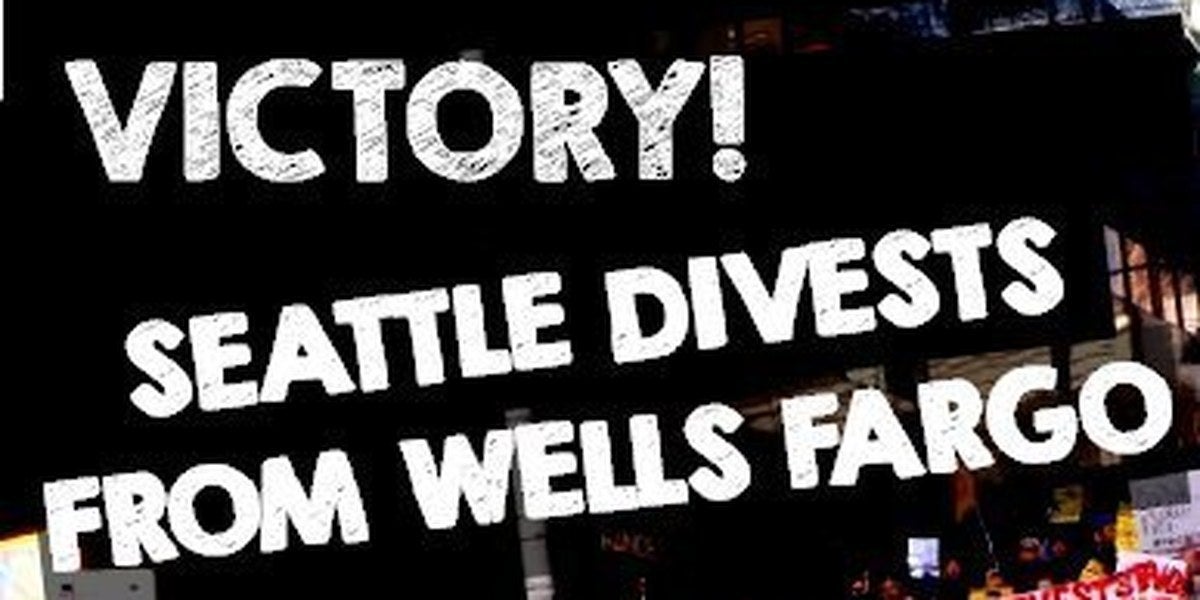 Seattle City Council has voted to divest from Wells Fargo over the bank’s role as a lender to the Dakota Access Pipeline (DAPL) and other business practices, including its financing of private prison companies, and a customer fraud case where employees opened as many as two million fake accounts.

The unanimous decision on Tuesday was met with cheers and a standing ovation from the crowd as Seattle became the first city in the nation to sever its ties with the San Francisco-based banking giant in protest of the controversial DAPL.

The Socially Responsible Banking ordinance directs city officials to end Seattle’s contract with Wells Fargo once it expires in 2018 and to not make new investments with the bank for three years.

“The example that we have set today can become a beacon of hope” for activists across the country, said Councilmember Kshama Sawant, one of the co-sponsors of the legislation.

Wells Fargo contends that it is one of 17 involved in financing the DAPL. Wells Fargo has $120 million in a $2.5 billion credit agreement funding the pipeline project and said it is obligated to carry out the agreement, according to the Associated Press.

“While we are disappointed that the city has decided to end our 18-year relationship, we stand ready to support Seattle with its financial services needs in the future,” Wells Fargo said in a statement.

Approval of the measure occurred just hours after the U.S. Army Corps of Engineers granted Energy Transfer Partners the final easement to drill under the Missouri River and finish the $3.8 billion project.

The Corps followed instructions from President Donald Trump, who signed two executive actions to advance the DAPL and the Keystone XL.


The completed 1,172-mile DAPL would carry oil from the Bakken formation in North Dakota to Gulf Coast refineries and export terminals via Patoka, Illinois. Its path crosses the Missouri River, which is the primary drinking water source for the Standing Rock Sioux reservation.

For months, the tribe and fellow Water Protectors have been trying to block construction of the DAPL. Protests have drawn thousands of people to Standing Rock. Hundreds of demonstrators still remain at the protest camps and thousands of U.S. military veterans have committed to returning to Standing Rock to continue the fight.

Pipeline opponents have urged banks to stop financing DAPL construction and have called on bank customers to pull money out of their accounts.

Olivia One Feather, a member of the Standing Rock Sioux tribe, told Seattle City Council, “When big cities such as this do the right thing, it sparks hope in the world.”

“It’s going to be a mixed blessing and timely at the same time,” Lakota Tribal Member and DAPL opponent Matt Remle told Capitol Hill Times about the Council’s vote in the wake of the Corps’ decision.