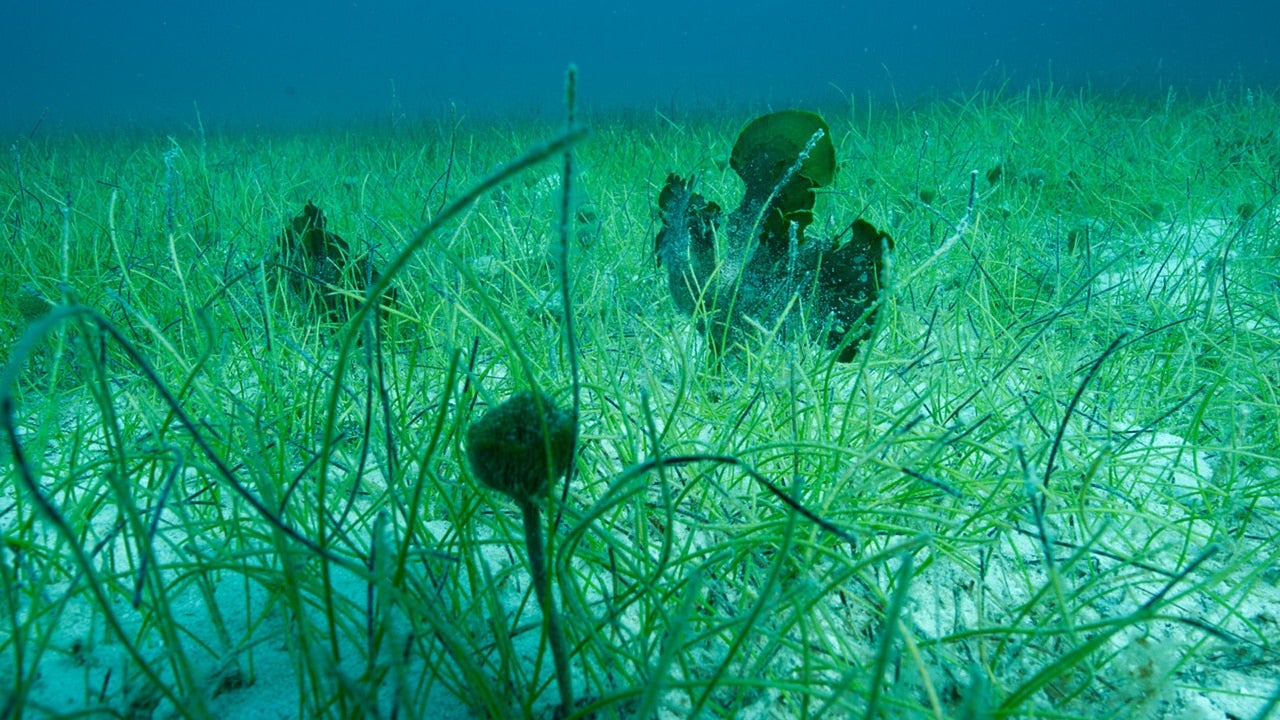 Two decades ago scientists and volunteers along the Virginia coast started tossing seagrass seeds into barren seaside lagoons. Disease and an intense hurricane had wiped out the plants in the 1930s, and no nearby meadows could serve as a naturally dispersing source of seeds to bring them back.

The seeding effort eventually delivered more than 70 million seeds — and it paid off, creating some 9,000 acres of the underwater plants.

Now monitoring of these restored meadows reveals multiple benefits to their restoration, including substantial increases in fish and invertebrate abundance, improved water clarity, and significant trapping of carbon and nitrogen.

“Planting adult seagrass is very labor intensive, but we started looking at using seeds in the lab and found it was quite easy,” said biologist Robert “JJ” Orth, lead author on a new paper about the project. “These areas have good water quality, are shallow and are near the ocean so they get bathed in cooler water — perfect conditions. It was a surprise how quickly it happened.”

The paper is part of a growing trend of evidence suggesting seagrass meadows can be easier to restore than other coastal habitats.

Human assistance isn’t always necessary, though. In areas where some beds remain, seagrass can even recover on its own when stressors are reduced or removed. For example, seagrass began to recover when Tampa Bay improved its water quality by reducing nitrogen loads from runoff by roughly 90%.

But more and more, seagrass meadows struggle to hang on.

The marine flowering plants have declined globally since the 1930s and currently disappear at a rate equivalent to a football field every 30 minutes, according to the United Nations Environment Programme. And research published in 2018 found the rate of decline is accelerating in many regions.

The causes of decline vary and overlap, depending on the region. They include thermal stress from climate change; human activities such as dredging, anchoring and coastal infrastructure; and intentional removal in tourist areas. In addition, increased runoff from land carries sediment that clouds the water, blocking sunlight the plants need for photosynthesis. Runoff can also carry contaminants and nutrients from fertilizer that disrupt habitats and cause algal blooms.

All that damage comes with a cost.

The Value of Seagrass

As with ecosystems like rainforests and mangroves, loss of seagrass increases carbon dioxide emissions. And that spells trouble not just for certain habitats but for the whole planet.

Although seagrass covers at most 0.2% of the seabed, it accounts for 10% of the ocean’s capacity to store carbon and soils, and these meadows store carbon dioxide an estimated 30 times faster than most terrestrial forests. Slow decomposition rates in seagrass sediments contribute to their high carbon burial rates. In Australia, according to research by scientists at Edith Cowan University, loss of seagrass meadows since the 1950s has increased carbon dioxide emissions by an amount equivalent to 5 million cars a year. The United Nations Environment Programme reports that a 29% decline in seagrass in Chesapeake Bay between 1991 and 2006 resulted in an estimated loss of up to 1.8 million tons of carbon.

Seagrasses also protect costal habitats. A healthy meadow slows wave energy, reduces erosion and lowers the risk of flooding. In Morro Bay, California, a 90% decline in the seagrass species known as eelgrass caused extensive erosion, according to a paper from researchers at California Polytechnic State University.

“Right away, we noticed big patterns in sediment loss or erosion,” said lead author Ryan Walter. “Many studies have shown this on individual eelgrass beds, but very few studies looked at it on a systemwide scale.”

In the tropics, seagrass’s natural protection can reduce the need for expensive and often-environmentally unfriendly beach nourishments regularly conducted in tourism areas.

Seagrass ecosystems improve water quality and clarity, filtering particles out of the water column and preventing resuspension of sediment. This role could be even more important in the future. By producing oxygen through photosynthesis, meadows could help offset decreased oxygen levels caused by warmer water temperatures (oxygen is less soluble in warm than in cold water).

The meadows also provide vital habitat for a wide variety of marine life, including fish, sea turtles, birds, marine mammals such as manatees, invertebrates and algae. They provide nursery habitat for roughly 20% of the world’s largest fisheries — an estimated 70% of fish habitats in Florida alone.

Conversely, their disappearance can contribute to die-offs of marine life. The loss of more than 20 square miles of seagrass in Florida’s Biscayne Bay may have helped set the stage for a widespread fish kill in summer 2020. Lack of grasses to produce oxygen left the basin more vulnerable when temperatures rose and oxygen levels dropped as a result, says Florida International University professor Piero Gardinali.

Governments and conservationists around the world have already put a lot of effort into coastal restoration efforts. And that’s helped some seagrass populations.

Where stressors remain, though, restoration grows more complicated. Research published this September found that only 37% of seagrass restorations have survived. Newly restored meadows remain vulnerable to the original stressors that depleted them, as well as to storms — and climate change.

In Chesapeake Bay a cold-water species of seagrass is currently hitting its heat limit, especially in summer, according to Alexander Challen Hyman of University of Florida’s School of Natural Resources and Environment. As waters continue to warm due to climate change, the species likely will disappear there.

Climate-driven sea-level rise complicates the problem as well. Seagrasses thrive at specific depths — too shallow and they dry out or are eaten, too deep and there isn’t enough light for photosynthesis.

But There’s Good News, Too

Luckily, left to its own devices, a seagrass meadow can flourish for hundreds of years, according to a paper published last year by Hyman and other researchers from the University of Florida. The researchers arrived at their conclusion by looking at shells of living mollusks and fossil shells to estimate the ages of meadows in Florida’s Big Bend region on the Gulf Coast.

That area has extensive, relatively pristine seagrass meadows. “Our motivation was to understand the past history of these systems, and shells store a lot of history,” said co-author Michal Kowalewski.

A high degree of similarity between living and dead shells indicates a stable area, while a mismatch suggests an area shifted from seagrass to barren sand. The researchers found that long-term accumulations of shells resembled living ones, suggesting that the seagrass habitats have been stable over time.

That stability allows biodiversity to thrive, creating conditions where specialist species can survive and flourish, according to Hyman.

“There must be reasons they thrive in one place, while a mile away they don’t and fossil data says they probably never did,” he said. “If we remove a seagrass patch, we cannot hope to plant it somewhere else. It’s not just the seagrass that is special. The location at which it’s found is special, too.”

A better approach is conserving these habitats in the first place, but we’re not doing enough of that right now. The UN reports that marine protected areas safeguard just 26% of recorded seagrass meadows, compared with 40% of coral reefs and 43% of mangroves.

In the meantime, small actions can make a big difference — such as fertilizer ordinances, for example, Gardinali suggested.

“Nitrogen and phosphorus are the problem,” he said. “It’s an easy first step. We can change the way we do small things, one at a time.”

Everything we do at this point will help, not only seagrass but everything that depends on it.

“These habitats are so vital,” Hyman says. “Putting aside erosion control and all these benefits people might not find as important, they harbor juvenile stages of all these marine species we like to eat — blue crabs, for example. From that standpoint alone, seagrass provides countless benefits to the economy.”

Those benefits have mostly gone ignored in favor of more visible, charismatic land-based habitats. That needs to change, the experts say.

“What the trees in the Amazon rainforest provide for that system is what eelgrass provides in estuarine systems,” said Walter. “So many ecosystem services, beyond just being a beautiful grass.”

One that, if we let it, will provide those services for hundreds of years.

Melissa Gaskill is a freelance science writer based in Austin whose work has appeared in Scientific American, Mental Floss, Newsweek, Alert Diver and many other publications. She is the co-author of A Worldwide Travel Guide to Sea Turtles and author of Pandas to Penguins: Ethical Encounters with Animals at Risk.