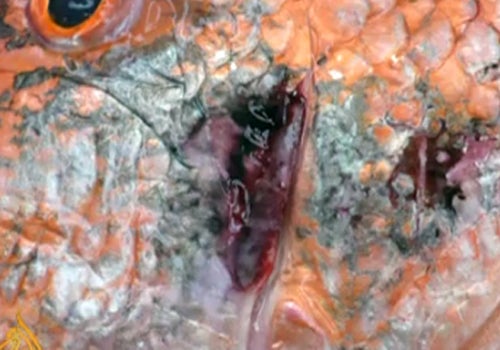 A new investigation by Al-Jazeera is confirming the worst about the residual impacts of the BP Deepwater Horizon Gulf oil spill. According to the network, scientists and fisherman are stunned by their recurring findings: “horribly mutated shrimp, fish with oozing sores, underdeveloped blue crabs lacking claws, eyeless crabs and shrimp” along with “shrimp with abnormal growths, female shrimp with their babies still attached to them, and shrimp with oiled gills.” Unfortunately, this list is anything but comprehensive.

The findings portend an ominous future for a region that has already suffered monumental economic and environmental catastrophe. Despite BP’s ongoing public relations blitz that paints a picture of white sand, sparkling water and abundant (untainted) seafood, the oil giant may find itself in hotter water, even as it tries to quickly settle damages and wash its hands of the whole affair.

For now, what is known is that BP released at least 4.9 million barrels of oil into the Gulf following the explosion, then covered the visible slicks with at least 1.9 million gallons of Corexit oil dispersant—a toxin known to be mutagenic—to sink the oil. While “perception is reality” may be the mantra in the worlds of advertising and public relations—and the perception certainly seemed to show clean water from the surface after a hurried clean-up effort—the reality is a seafloor covered in oil.

“This is Macondo oil on the bottom. These are dead organisms because of oil being deposited on their heads,” said Samantha Joye, a marine scientist with the University of Georgia at the annual American Association for the Advancement of Science conference in Washington.

Meanwhile, BP and federal agencies have very few answers, and the answers they do have are as grounded in reality as Alice was after eating her mushroom in Wonderland.

According to Al-Jazeera, the agencies in charge of this matter—the U.S. Environmental Protection Agency and the Food and Drug Administration (FDA)—”insisted Al-Jazeera talk with the National Oceanic and Atmospheric Administration (NOAA).” Unfortunately, NOAA wouldn’t comment because of its involvement with the BP lawsuit and BP, in lieu of a televised interview, sent a statement reading: “Seafood from the Gulf of Mexico is among the most tested in the world, and, according to the FDA and NOAA, it is as safe now as it was before the accident.”

Recent scientific research led by East Carolina University confirmed that oil from the Deepwater Horizon explosion successfully found its way into zooplankton—small organisms that serve as the foundation of the Gulf food chain. Zooplankton work their way up through shrimp, small fish, and ultimately, larger species such as dolphins and sharks.

Al Jazeera spoke with Ed Cake, a biological oceanographer, about his concern for the Gulf. “It has been more than 33 years since the 1979 Ixtoc-1 oil disaster in Mexico’s Bay of Campeche, and the oysters, clams and mangrove forests have still not recovered in their oiled habitats in seaside estuaries of the Yucatan Peninsula,” he said. “It has been 23 years since the 1989 Exxon Valdez oil disaster in Alaska, and the herring fishery that failed in the wake of that disaster has still not returned.”

“I will not be alive to see the Gulf of Mexico recover,” added Cake, who is 72 years old. “Without funding and serious commitment, these things will not come back to pre-April 2010 levels for decades.”