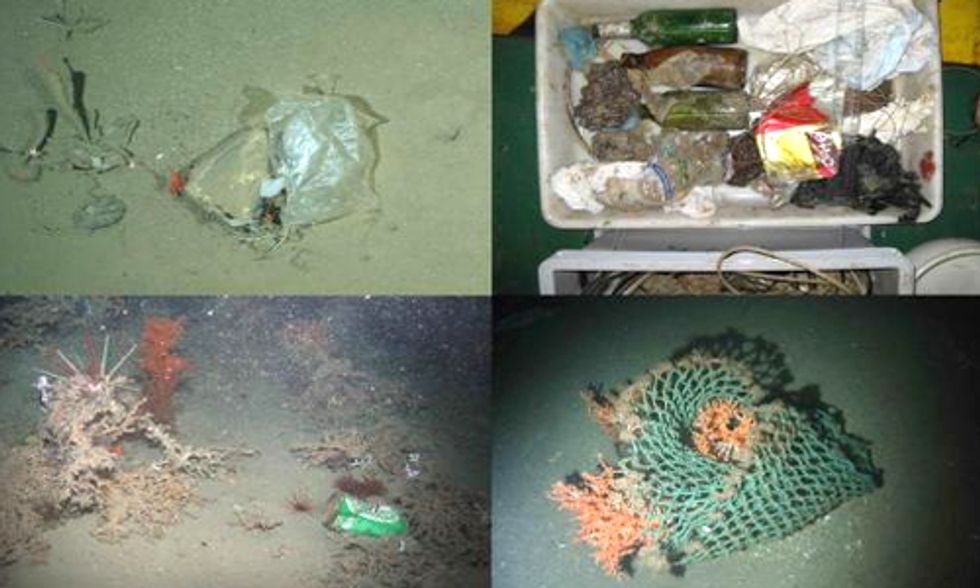 A major survey of the ocean floor has found trash piling up throughout the Atlantic and Arctic oceans and Mediterranean Sea, reaching depths of nearly three miles below the surface, according to scientists from 15 European research organizations.

This shows litter items on the seafloor of European waters. Clockwise from top left i) Plastic bag recorded by an OFOS at the HAUSGARTEN observatory (Arctic) at 2,500 m; ii) Litter recovered within the net of a trawl in Blanes open slope at 1,500 m; iii) Cargo net entangled in a cold-water coral colony at 950 m (National Oceanography Centre, UK). iv) "Heineken" beer can in the upper Whittard canyon at 950 m water depth.

Litter was located at each of the 600 sites surveyed, with plastic accounting for 41 percent and derelict fishing gear 34 percent. Glass, metal, wood, cardboard, clothing, pottery and unidentified materials were also found. Garbage accumulated at sites as far as 2,000 kilometers (1,243 miles) from land and at depths up to 4.5 kilometers (2.8 miles), according to the report.

Seafloor litter is a major problem since it can accumulate in and kill marine animals that mistake it for food. The trash can also entangle fish, seabirds and coral.

"This survey has shown that human litter is present in all marine habitats, from beaches to the most remote and deepest parts of the oceans," one author said. "These were [humans'] first visits to many of these sites, but we were shocked to find that our rubbish has got there before us."