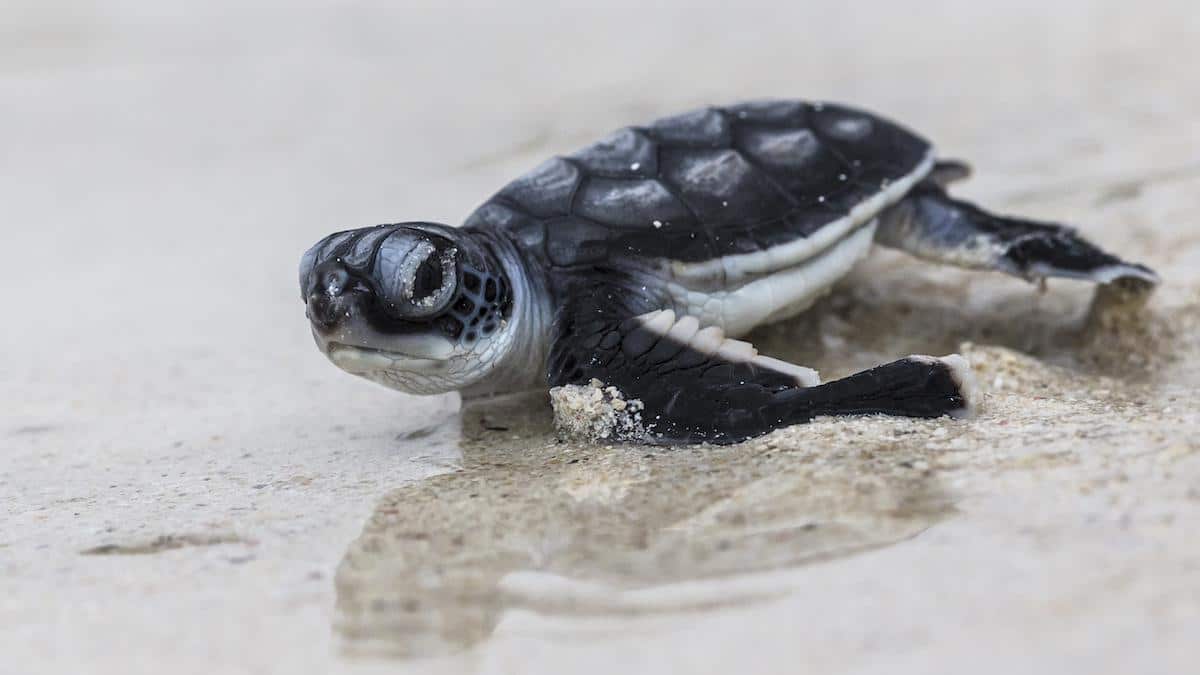 A newly-hatched green sea turtle heading out to the ocean. Manoj Shah

The 8.7 million species that inhabit this Earth did not evolve in a world dominated by human activity, and this can cause problems when climate change or pollution transforms a previously advantageous environment into a perilous one.

This is the case for juvenile sea turtles, a study published in Frontiers in Marine Science this month has found. The animals‘ natural development strategy puts them at greater risk of swallowing some of the eight million tons of plastic that enter the world’s oceans every year.

“Once hatchlings leave the nesting beach all but one species enter in ocean currents to develop[] in open ocean areas,” study lead author Dr. Emily Duncan of the Centre for Ecology and Conservation at the University of Exeter’s Penryn Campus in Cornwall explained in an email to EcoWatch. “In the past this strategy was beneficial due to lower predator numbers and an abundance of food items. However now these are areas of high plastic accumulation therefore exposing them to higher ingestion risk.”

What happens to juvenile sea turtles is what the study authors call an “evolutionary trap.” This, the study authors explained, is the word for situations in which large numbers of a species are attracted to a particular resource or habitat that ends up harming them.

“This phenomenon occurs when organisms rely on environmental cues to make life history decisions, however, due to modern anthropogenic disturbances the environment is being altered rapidly and former reliable cues may no longer be associated with conditions favouring adaptive outcomes,” the study authors wrote. “Human-induced global environmental change is capable of rapidly creating a diverse array of ecologically novel conditions to which animals have not evolved. Therefore, organisms become ‘trapped’ by their evolutionary responses.”

This can be especially damaging for species like sea turtles that take a long time to develop, because they lack the ability to adapt to new circumstances in the moment.

That young sea turtles tend to frequent parts of the ocean where they are more likely to encounter plastic is not a new observation, Sea Turtle Conservancy Executive Director David Godfrey, who was not involved with the research, told EcoWatch. Conservationists have been aware of the problem for at least 30 years. However, much of this awareness is based on anecdotal evidence, such as when large numbers of young turtles wash up dead after a storm.

That difficulty is part of what makes the new research so important, according to Duncan. Her team was able “report the high incidence of plastic ingestion in this vulnerable and difficult to study life stage,” she wrote.

They did this by examining 121 stranded and bycaught juvenile sea turtles from Queensland Australia, which borders the Pacific Ocean, and Western Australia, which borders the Indian. Their sample included members of five of the world’s seven sea turtle species: green, loggerhead, hawksbill, olive ridley and flatback turtles. They then recorded what percentage of each species had plastic in their stomachs, and which ocean they were found in. The results are as follows.

The only species that did not contain any plastics was the hawksbill turtle, but the researchers noted that they only had a sample size of seven individuals to work with.

“Some of the most populous developing countries in the world surround the Indopacific,” Duncan wrote, explaining these differences. “Rapidly developing economies, coastal migration and poor waste management will all play their role. Therefore there will be differing inputs and levels of plastic waste entering the ocean. Current movement will also impact the distribution of these throughout.”

Godfrey said the new study was “a bit more systematic” than what he and others have observed over decades of conservation work. But, while the new study focused on the Indian and Pacific Oceans, his experience does suggest that the problem is not limited to these bodies of water. He described one incident along the Florida coast in which nearly 100 young turtles washed up dead and all of them had plastic in their stomachs.

“I’ve been in the operating room with little hatchlings spread out and their guts opened up and seen the just voluminous amounts of colorful plastic that they’re pulling out of these turtles,” he said.

Does eating all this plastic harm the turtles? Duncan said that some of the turtles in her study had clearly been directly harmed by the plastic they consumed. In one case, a starving green turtle from the Indian Ocean that had eaten 343 pieces of plastic was found to have its stomach damaged by its meal. However, she said more research was needed to determine how plastics might indirectly harm the health of young turtles, by, for example, exposing them to toxic chemicals.

Godfrey noted that plastic is only one of the many threats facing sea turtles. The species is also especially vulnerable to the climate crisis for four main reasons:

Added to all this is the problem of artificial lights along the coast, which can confuse young turtles when they leave the nests, causing them to wander inland instead of out to sea. All of this can have a “cumulative impact” on growing turtles that plastic only compounds, Godfrey said.

“Far fewer turtles reach the water, and those that do are weaker, they’ve burned energy going the wrong direction on the land, and then they get out into the marine environment and now they need sustenance, and half of what they find and eat is plastic,” he explained.

Duncan said the best way to protect young turtles when they do reach the open ocean is to work together to reduce the amount of plastic entering the ocean to begin with and to improve waste management.

This, Godfrey said, requires policies like plastic-bag bans, business initiatives like restaurant chains swapping out plastic takeaway containers for paper ones and individual choices to use less plastic.

“You want readers of an article like this to know that we all have to make changes,” he said.