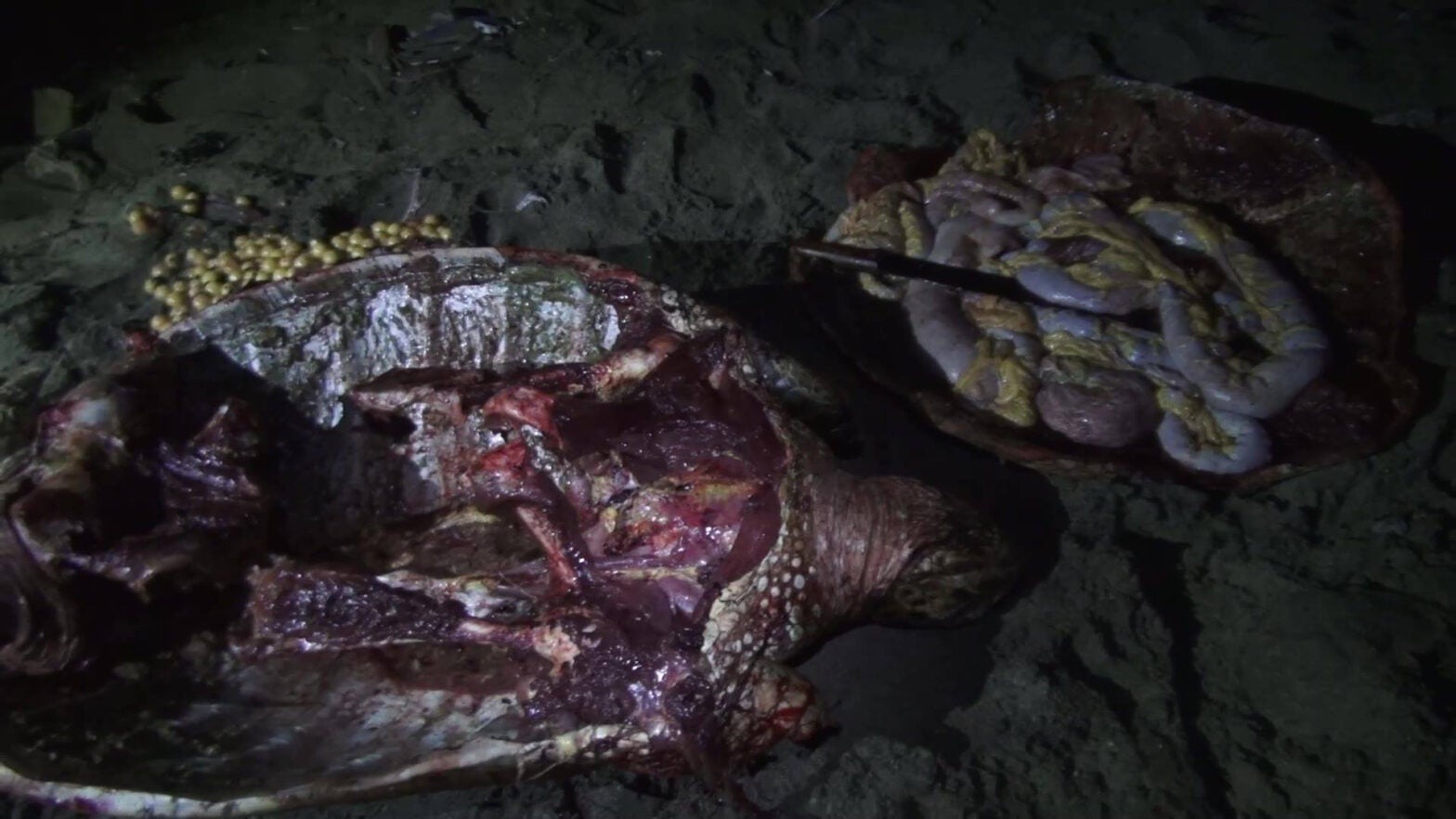 Less than two weeks after publishing the graphic images of poached sea turtles on the French island of Mayotte, Sea Shepherd‘s conservation team interrupted another slaughter on the night of July 7, and this time—as captured on video footage shown above—it turned violent.

When the volunteers arrived at the beach known as Moya 1, one of the most popular tourist beaches on the Petit Terre island, they spotted a 4×4 vehicle, its lights switched off as it waited to pick up poached turtle meat. The guards, who should have been there to protect the turtles who come to lay their eggs, were nowhere to be seen.

Down on the beach, the volunteers found two turtles ripped open with their eggs scattered in the sand. There was no sign of the guards who were supposedly there to patrol the beaches, so Sea Shepherd alerted the local gendarmes. The poachers, who had run to hide on a hill overlooking the beach, began throwing large rocks at the volunteers and police from above, barely missing their heads. No one was hurt, however the poachers also set the Sea Shepherd volunteers’ car on fire.

Despite the intervention of three police officers, who helped seize some of the turtle meat which was left behind by the fleeing poachers, no arrests could be made because the security on the beach that night was grossly insufficient compared to the scale of the threat.

“France seems to remain blind and deaf concerning the social and ecological crisis which is raging in Mayotte,” said Lamya Essemlali, president of Sea Shepherd France. “France is letting its overseas department perish, a place which is home to one of the world’s largest lagoons, rich in local biodiversity. The only law which seems to prevail on this island is the law of the jungle. This condition has caused social and environmental chaos which is hard to imagine in continental France. Once a true paradise, Mayotte has now become hell on earth.”

Sea Shepherd launched Operation Nyamba at the request of the locals who don’t want to see their island perish from indifference, and now work hand-in-hand with them to fight the poaching with direct action.

“Even though the circumstances on the ground turned out to be worse and more dramatic than we expected, the situation has only reinforced our determination,” Essemlali said. “We will not give up on Mayotte. If we have often stated we would give our lives to protect whales, we are equally ready to do the same for turtles.”