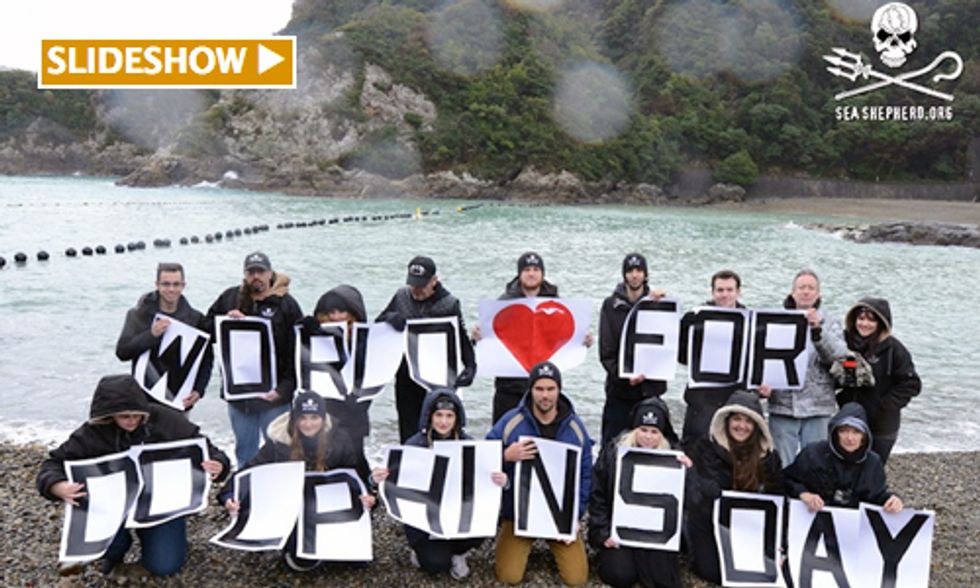 To commemorate Valentine’s Day, Sea Shepherd Conservation Society brought the world’s love of dolphins to Japan’s doorstep to call for an end to the brutal and infamous hunts in Taiji, Japan’s killing cove.

Led by Sea Shepherd chapters, peaceful “World Love for Dolphins Day” demonstrations were held Friday at the Embassy of Japan in Washington, D.C. and Japanese consulates in Los Angeles, New York, Seattle, San Francisco, Denver and Houston. Sea Shepherd supporters joined many concerned members of the public who turned out during the noon hour on Valentine’s Day to show Japan the world’s special reverence for dolphins and the global desire to protect them. Along with the events in the U.S., there were additional demonstrations at Japanese Embassies and Consulates overseas, truly showing the growing global concern for the fate of dolphins.

In Los Angeles, CA, approximately 250 people attended the demonstration joined by media and celebrity supporters. Celebrities, including actresses Shannen Doherty (Beverly Hills 90210 and Charmed) and Holly Marie Combs (Pretty Little Liars and Charmed) demonstrated along with Sea Shepherd supporter and TV executive Sam Simon, Playboy model and animal advocate Sia Barbi of the Barbi Twins, and actors Zach Callison (I’m In The Band) and Billy McNamara (Chasers and Stealing Home), who all stood shoulder-to-shoulder and marched around the Consulate building with fellow demonstrators in defense of dolphins.

Sea Shepherd’s founder Captain Paul Watson spoke to the crowd of dolphin lovers assembled in New York City, where the demonstration stretched down the block. Also in attendance in New York, as well as Seattle and Los Angeles, were several Sea Shepherd Cove Guardians, who have stood along the shores of the Cove to document and expose Taiji’s atrocities for the world to see.

Demonstrating in Seattle, where the crowd numbered 150, Scott West, Cove Guardian Lead and Campaign Director, said, “Sea Shepherd’s staff, volunteers and supporters stand with our brave Cove Guardian crew, who are in Taiji six months of the year spotlighting these cruel hunts. Despite being half way around the world, the Cove Guardians stood with us at their own demonstration on the shores of the Cove, holding up signs that spelled out 'World Love for Dolphins Day' to drive home the point that the world loves dolphins and wants to see this brutality end."

“Standing on the ground in Taiji where day in and day out we witness horrific cruelty inflicted on dolphins, we are so encouraged to see the hundreds of people who showed their love for dolphins and asked Japan to stop the bloodshed,” said Senior Cove Guardian Leader Melissa Sehgal. “The Cove Guardians will not stop until the slaughter ends, and we hope the awareness raised by ‘World Love for Dolphins Day’ will help bring the end of the hunts ever closer.”