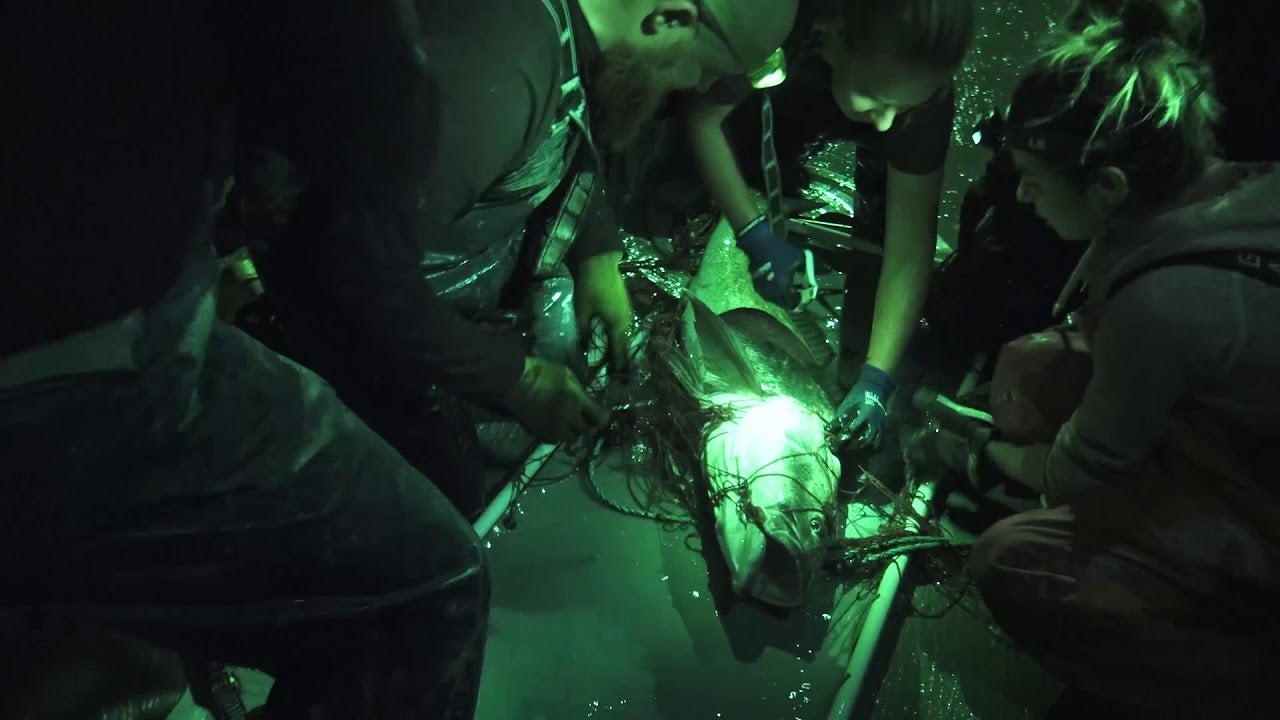 At 7:45 p.m. PST Monday, the Sea Shepherd vessel M/V SHARPIE came upon an illegal gillnet within the Vaquita Refuge in the Northern Sea of Cortez, Mexico. The gillnet was entangled in a longline. As the ship’s crew began to separate the illegal fishing gear, they noticed live totoaba bass in the net, embarking on an unprecedented rescue operation.

It is the height of totoaba bass spawning season in the Upper Gulf of California, when the endangered fish migrate directly to an area inhabited by the vaquita porpoise. The vaquita is currently the most endangered marine mammal in the world, and continues to be threatened as bycatch in the illegal totoaba trade.

Tensions are rising in the Upper Gulf of California. Poachers have become more aggressive towards Sea Shepherd vessels, using firearms to shoot down drones and incendiary objects to intimidate the crew. Thanks to the addition of armed Enforcement Agents, and an emboldened pact with Mexico’s Environment and Fisheries Ministries, Federal Environmental Attorney’s Office and Federal Police, security has drastically improved, allowing Sea Shepherd to continue its important work protecting the Vaquita Refuge.

The totoaba bass is highly sought after due to its valuable swim bladder. Much like shark fins or rhino horns, totoaba bladders are sold in Asian markets as medicinal quackery. One totoaba bladder can sell for upwards of $10,000 in Asia.
Although poachers in the Gulf of California see only a fraction of the street price, they do well by local standards, which has consequently pushed the vaquita porpoise to the brink of extinction as a tragic side effect.

All seemed normal the evening of March 25 as the Sea Shepherd M/V Sharpie patrolled the protected vaquita area looking for illegal activity. The ship’s captain, Fanch Martin from France, spotted a net by deciphering the ship’s sonar data, a new method developed by Sea Shepherd in recent months.

“It was a challenge to maintain the ship’s position in the strong current while the crew pulled the net and saved the fish quickly and efficiently, while at the same time keeping the longline tight enough so it would not entangle my propeller,” said Captain Fanch, adding, “The coordination of the crew and the authorities on board was intense. Everyone was involved and focused—it was an all hands on deck moment, and the crew did an amazing job, with the extraordinary outcome of saving every single totoaba in that net; this has never happened before.”

The M/V Sharpie’s bosun, Willie Hatfield, who coordinated the deck activities stated, “This is a quintessential moment for Operation Milagro, saving a whole school of spawning critically endangered totoaba at once means so much.” After the two intense hours it took to save all the fish and remove the illegal fishing gear from the Sea of Cortez, he added. “As we were leaving, we saw a skiff coming to retrieve the net.

“Those fish were five minutes away from death and we saved them—it was a miracle.”

Sea Shepherd operates two former Island Class U.S. Coast Patrol ships in the area protecting the vaquita as part of Operation Milagro IV, the M/V Sharpie and M/V Farley Mowat. Each ship hosts five enforcement officers from the government of Mexico on board, with the ability to make arrests, prevent poaching in the Refuge and assure the proper disposal of dead totoaba fish. The officers were essential in saving the totoaba, as they tirelessly helped the Sea Shepherd crew, both in keeping the fish alive while being freed from the net, and ensuring the vessel’s safety from armed poachers.

To date, Sea Shepherd has removed 596 pieces of illegal fishing gear from the Sea of Cortez since starting its effort to protect the vaquita porpoise in 2015, saving 2661 animals in the process. That accounts for more than 100 kilometers (62 miles) of nets removed, which is the distance from Earth to outer space and the height of nine Everest mountains. Sea Shepherd works with members of its partner network to ensure these illegal nets will be recycled responsibly and never find their way back into the ocean.