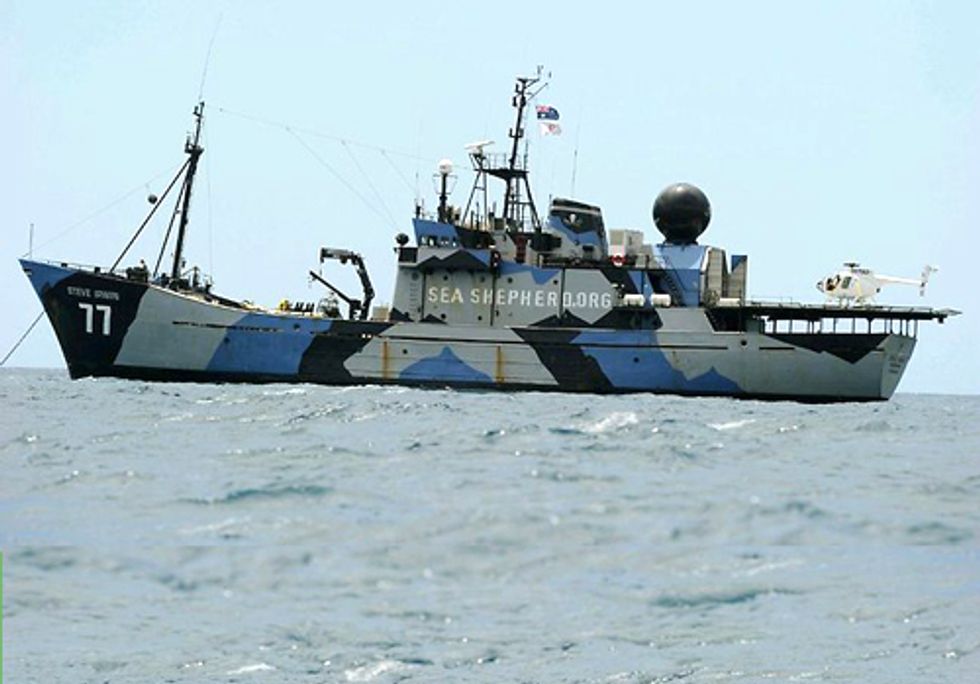 The Sea Shepherd crew has intercepted the Japanese whaling fleet on Christmas Day, a thousand miles north of the Southern Ocean Whale Sanctuary.

“We can cover hundreds of miles with these drones and they have proven to be valuable assets for this campaign,” said Captain Paul Watson on board the Steve Irwin. The drone named Nicole Montecalvo was donated to the Steve Irwin by Bayshore Recycling of New Jersey, and Moran Office of Maritime and Port Security, also of New Jersey.

Captain Watson having received reports from fishermen when the Japanese ship passed through the Lombok Strait waited south of the strait at a distance of 500 miles off the southwest coast of Western Australia. Sea Shepherd caught the whalers at 37 degrees South, far above the Southern Ocean Whale Sanctuary.

“The chase is on for the next 1,000 miles,” said Quartermaster Eleanor Lister of Jersey (U.K.)

With the Steve Irwin taking up the resources of three of the Japanese ships, the Bob Barker remains clear of a tail and the Brigitte Bardot is clear to scout out the factory ship, having superior speed to the harpoon vessels.

The Sea Shepherd crew have found the Japanese whaling fleet before a single whale has been killed.

“This is going to be a long hard pursuit from here to the coast of Antarctica,” said Captain Watson. “But thanks to these drones, we now have an advantage we have never had before—eyes in the sky.”

Established in 1977, Sea Shepherd Conservation Society (SSCS) is an international non-profit conservation organization whose mission is to end the destruction of habitat and slaughter of wildlife in the world’s oceans in order to conserve and protect ecosystems and species. Sea Shepherd uses innovative direct-action tactics to investigate, document, and take action when necessary to expose and confront illegal activities on the high seas. By safeguarding the biodiversity of our delicately balanced oceanic ecosystems, Sea Shepherd works to ensure their survival for future generations. Founder and President Captain Paul Watson, is a world renowned, respected leader in environmental issues.