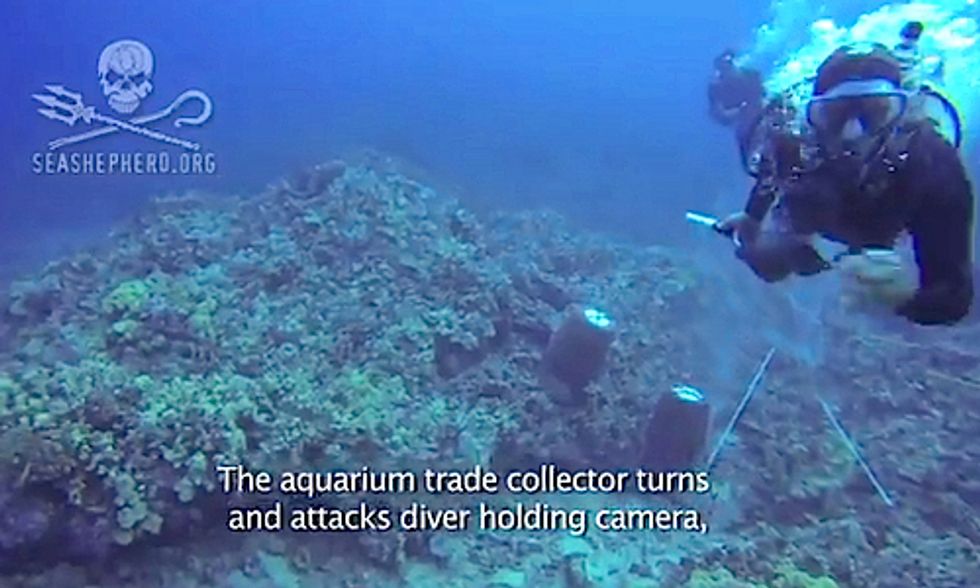 A diver documenting an aquarium trade wildlife collection operation on a Hawaiian reef off the Kona Coast as part of Sea Shepherd Conservation Society’s Operation Reef Defense was nearly killed by a reef fish collector in an unprovoked and highly dangerous attack on Thursday, May 8.

As the Sea Shepherd divers approached the coral reef, they came across two other divers poking coral and collecting fish. As they filmed from a distance, one of the collectors noticed the camera from afar and quickly “rushed” diver Rene Umberger without warning and pulled the air regulator from her mouth. This device is what provides oxygen from a diver’s air tank, and forcibly removing it from a diver’s mouth can become deadly in a matter of seconds.

The divers were at a depth of approximately 50 feet in the ocean, and a diver with less experience than Umberger could have quickly become panicked and disoriented, leaving them unable to replace their air regulator or making a dangerous attempt to quickly swim back to the surface. Fortunately, Umberger was able to put her air regulator back in place, despite some damage that was done to it, and the divers continued to document the incident on video as the reef wildlife trafficker continued to make threatening gestures.

“This violent assault is nothing short of attempted murder," said Sea Shepherd USA Administrative Director, Susan Hartland. “The fish trafficker responsible should be charged and held responsible to the fullest extent of the law. All of us at Sea Shepherd are relieved that Rene is okay, but a less accomplished diver may not have been so lucky.”

One of the collectors quickly “rushed” diver Rene Umberger without warning and ripped the air regulator from her mouth causing the damage shown here
Photo credit: Sea Shepherd

Sea Shepherd founder, Captain Paul Watson, had this to say upon viewing the video: “This incident shows just how far fish collectors are willing to go in their greedy operations that are turning reef ecosystems, once teeming with life, into barren wastelands. The reefs are dying in our time, and Sea Shepherd remains committed to exposing the destruction caused by the lucrative global aquarium trade.”

“As part of Reef Defense in Hawaii, Sea Shepherd is engaged in working with the island community to support their initiative to respect the ocean and coral reef wildlife,” added Mike Long, Sea Shepherd’s reef defense coordinator. “This incident was very unfortunate and we know that it is not representative of the people of Hawaii. The aquarium trade is a dark hobby. We are grateful to be here and involved in a movement to protect such a remarkable ecosystem."

The world’s coral reefs, often referred to as the “rainforests of the sea,” are in a state of immediate crisis. Sea Shepherd launched its campaign, Operation Reef Defense in order to preserve these critical and biologically diverse ecosystems that provide habitat to approximately 25 percent of all marine species. Human activities including overfishing, coastal development, pollution and climate change as well as the removal of reef wildlife for the aquarium hobby trade, have had a devastating impact, leaving 25 percent of the world’s reefs gone and more than 60 percent damaged or at risk of collapse.

As the aquarium trade expands, the reefs will continue to suffer as a result of the removal of species from reef ecosystems. Just in Hawaii, the top ten aquarium fish species have decreased by 59 percent over the last 20 years. Full tanks mean empty reefs, and empty reefs mean dying oceans. Sea Shepherd will continue to defend the reefs, preserving the future of the oceans on which all species on Earth depend for survival.