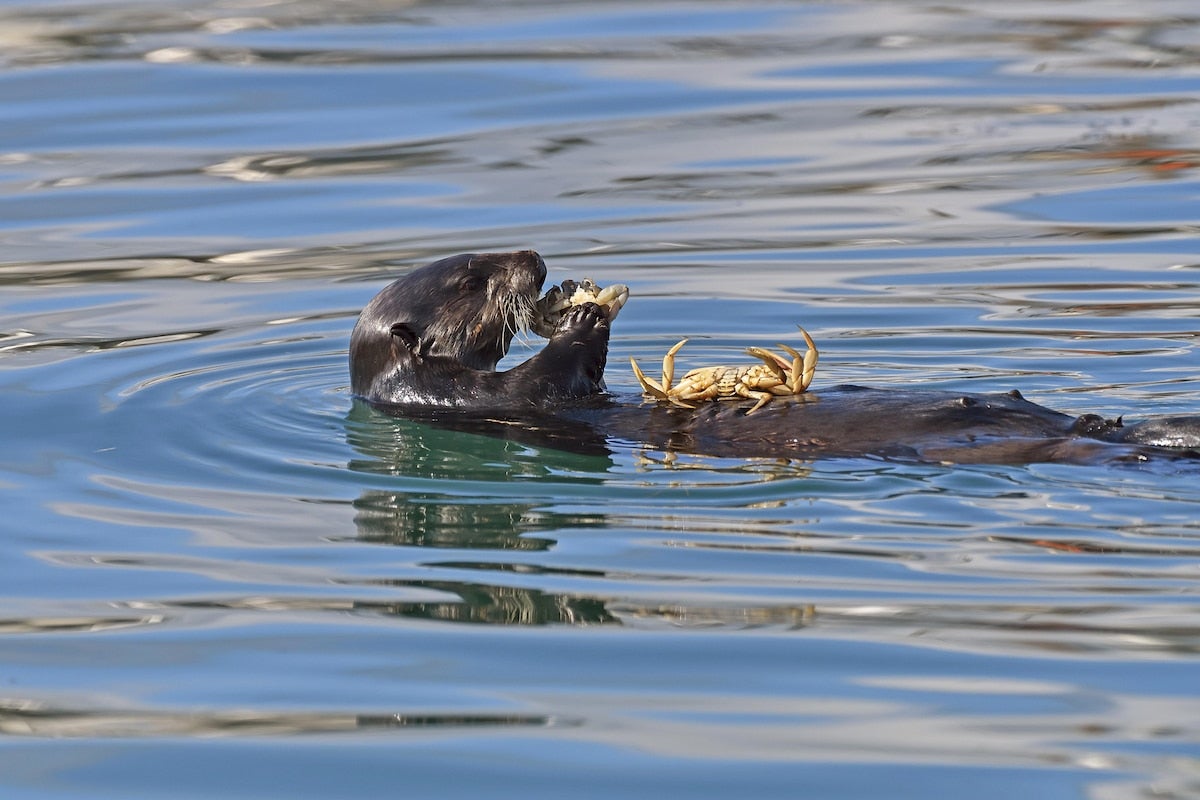 A sea otter eats a crab and keeps another one on its belly in the Gulf of Alaska. Gerhard Kraus / Getty Images

A recent report contends that reintroducing sea otters to the Oregon coast is feasible and beneficial to the state’s marine ecosystem if certain best reintroduction policies are followed. However, sea otter’s voracious appetites for certain invertebrates may have “consequential” impacts on area fisheries.

Sea otters have an outsized impact on the ecosystems they inhabit, making them a “keystone species” with few if any other species suitable to replace them. The report explained how sea otters’ role in a marine food chain naturally limits sea urchins and other large invertebrate species, like Dungeness crabs.

“By munching on urchins, [a sea otter] helps kelp forests flourish, and by crunching on crabs, it promotes eelgrass in estuaries,” according to a Monterey Bay Aquarium fact sheet. All that uneaten kelp helps to “draw down [carbon dioxide] from the overlying atmosphere, thus potentially influencing carbon sequestration,” the report noted.

But while the report noted that the return of sea otters to Oregon’s coastline would be celebrated by local Indigenous peoples with deep spiritual connections to the marine mammal, not everyone living in the area would necessarily cheer on the recovery effort.

With sea otters erased from Oregon’s coastline for over a century, commercial and recreational fisheries haven’t had any non-human competition for invertebrates that are harvested and sold for human consumption, the report explained. Although researchers said it was hard to predict the extent of negative impacts to certain invertebrate species, Dungeness crabs, red rock crabs, razor clams, butter clams, Gaper clams, littleneck clams, cockles, mussels, ghost shrimp, and both red and purple sea urchins would all “potentially… be affected by sea otter recovery.”

“Some of these fisheries represent hundreds of thousands of dollars annually, or even… tens of millions of dollars, thus the potential economic impacts of even a small reduction due to sea otter recovery are consequential,” the report noted. “However, while for some of fisheries… there is good reason to project a substantial negative impact of sea otter recovery, in the case of others… it is far from clear whether there would be a negative impact, or how substantial such an effect would be.”

Nevertheless, while relocating sea otters to Oregon waters to reestablish the local population is feasible, the report pointed out any captures shouldn’t exceed around 10% of the individual animals that make up a specific raft of otters. Models used by the report’s authors showed that removing more than that number could result in “population-level consequences,” while capturing fewer than 10% of a local population “may be sustainable.”

Capturing sea otters in certain parts of southeastern Alaska “would have little measurable population-level effect” and would be “the best potential source of northern sea otters,” the report noted. However, to “maximize genetic diversity,” sea otters from populations both north and south of Oregon’s coastline should be considered for relocation.

Sea otters once could be found between northern Japan and Russia’s Kamchatka Peninsula, along the Aleutian Islands, along the entire U.S. West Coast and even south into Mexico’s Baja California Peninsula, according to the report. But an insatiable desire to hunt sea otters for their thick fur coats, later sold in the international fur markets, eventually eradicated the creatures from significant portions of their former territory, including Oregon.

Earlier attempts to relocate and reintroduce sea otters to areas within their historic range showed that those involved in the process lacked a basic understanding of the creatures’ bodily functions and survival needs. Many sea otters died during the very first relocation attempts, which the report attributed in part to a lack of clean water, sufficient space and suitable food during transportation and holding.

Later endeavors would show the importance of making sure that transplanted sea otter populations would also have plenty of prey in their new habitat to consume. Successful sea otter relocations in the 1960s and 1970s in southeast Alaska drove population growth that eventually led to current-day estimates of over 25,000 individual otters in that region.

An Oregon-based nonprofit known as the Elakha Alliance  — made up of tribal, academic and conservation stakeholders focused on sea otter and marine ecosystem conservation — issued the report in January.

The authors of the 12-chapter report included current or retired staff of the U.S. Geological Survey, the Seattle Aquarium, the Monterey Bay Aquarium and the University of Oregon.